Editor’s note: Continuing our series (past posts may be found here, here, and here) showcasing the challenges faced by practitioners in developing non-traditional poverty alleviation programs for the “ultra poor,” this post looks at Partners in Prosperity (PnP). I recently spoke with Vivek Kaushik, PnP program director, about its mission and its pilot approach to integrating livelihoods into the lives of the poor. (Full disclosure: PnP was part of Unitus’s Ultra Poor Initiative).

NextBillion.net: What was the genesis of the PnP ultra poor program? Can you describe its original intent and design?

Kaushik: We had researched other ultra poor programs around the world, and liked the model that BRAC was using in Bangladesh. That model recommends several months of support to the ultra poor in areas such as food grain subsidy, health care, financial education, and finally, skills training that leads to a new livelihood activity. We wondered if we could achieve the same outcome by shortening the program timeline from 24 months to 12 months, and also by leveraging local government schemes – like employment guarantees for the poor – to assist with livelihood creation. We hoped this would help us lower the cost of running such a program.

The original design of the program was about nine months of healthcare for critical ailments, financial literacy that focused on the importance of savings, skills training, and then enrollment into government-sponsored employment guarantee programs. These programs are designed to guarantee at least 100 days of paid work for the poor such as on construction sites and public sector projects.

NextBillion.net: Most ultra poor program focus on rural populations. Why did PnP choose urban, and how specifically did you choose the communities you did?

Kaushik: The PnP office is located in Dehradun and right outside of our doorstep we saw communities that were not being served at all. So, we said, why not start right here, instead of traveling very far for the sake of serving a rural segment? After all, most of the households living in dire poverty in the Dehradun slums have recently come from rural towns and are really struggling.

PnP is the non-profit [affiliate] of Mimo Finance, a microfinance institution that is very active in Uttarakhand. It was easy for us to compare notes with Mimo and identify areas where it was unable to lend. We eventually narrowed down to Nanda-ki-Chowki, “NKC”, and Doiwala, two slum settlements that seemed the worst off in terms of quality of housing, and access to water, electricity, and other services.

These slums are unregistered and not even recognized by the local government. Many warned us that eviction is a huge risk with unauthorized colonies (non-notified slums), but we couldn’t overlook the fact that these appeared to be the most in need. We ended up selecting 400 beneficiaries between these two settlements.

NextBillion.net: The intervention did not work out the way you had designed it. So what was the “a-ha” moment when you realized it wasn’t working?

Kaushik: The “a-ha” moment was sudden, shocking, and extremely disappointing! Midway through the program, we lost half of our beneficiaries. Not by eviction, but by simple migration. 180 of our 400 beneficiaries left when they lost their main livelihood source. Most of our households derived their income from breaking stones in the dry riverbed that runs along the slums. They would sell the stone fragments to construction companies, and for a whole day’s work a family could earn enough to buy food. The local government in spring 2010 suddenly outlawed this practice, saying it was environmentally damaging. Many of our beneficiaries left within a few days in search of work. 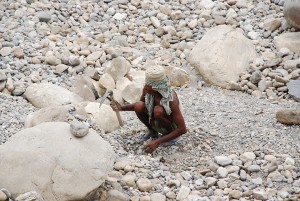 This is when it really hit us how insecure they were when it came to earning an income. They may live in decrepit housing, have health problems, struggle with food, but as soon as the livelihood was threatened, they quickly uprooted everything in order to find another income source. The big revelation was had we started with livelihood activity in the program, our beneficiaries wouldn’t have had to move. That was a tough way to learn the lesson. (Above: A man breaks rocks in a riverbed. Image credit: PnP).

Even for the ones who stayed behind, they showed much more interest in the program once we started the skills training and livelihood activity. Attendance in our financial literacy sessions increased, and some women commented that the lessons made more sense once they had an income.

If we were to do this again – maybe this will be one of your questions – we would start with livelihoods activity and then slowly introduce healthcare support and financial education.

NextBillion.net: This seems to go against conventional thinking. Can the ultra poor – given their critical needs – really be productive from day one of the program?

Kaushik: They absolutely can. In urban areas, members of the poorest households are already working – they have to. They wake up each day thinking of what they will do that day to earn money – manual labour, shoe-shining, trash picking – and this preoccupies them greatly. The constant search for work leaves them little time to take up other priorities. We feel that giving them a stable livelihood will ease their minds, increase their income very quickly, and allow them to attend to their other needs – like healthcare – on their terms.

NextBillion.net: How did you pick the livelihoods you did? Can you give some examples of livelihoods that were well received by this community?

The livelihoods had to fit certain criteria to be relevant for beneficiaries:

The livelihoods we had the most success with included candle-making, kirana (convenience) shop stall, vegetable vending, chaat (snack) stands.

NextBillion.net: Originally, you thought there would be a big role of government programs and schemes for the poor; it ended up comprising very little in the end. Can you talk about your learnings on this front, and why this happened?

Kaushik: The government authorities demanded ID proof from our beneficiaries, who certainly did not have any forms of ID. We tried to be very creative with constructing IDs for them that showed that they belonged to a formal program, were working with an NGO that could vouch for them, or were signed up with a well-known hospital and partaking in a health scheme, etc. None of these were accepted.

Outside of the ID proof issue, the beneficiaries themselves held a deep mistrust of the authorities that we could not overcome. We tried to slowly introduce this concept of the employment guarantee programs, but time and time again, we met with resistance. In addition to general mistrust of the authorities, beneficiaries were worried that the government jobs would entail hard manual work or travel to faraway sites – similar to the work they were already doing. 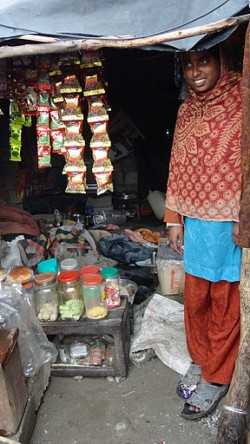 Our livelihoods were mostly home-based and gave them a level of flexibility and convenience they never had before. We assembled “starter kits” of each livelihood that included the basic raw materials they needed to get started, and they really appreciated this. Some, for example, had a desire in the past that they would set up a vegetable stand; most hadn’t known how to get started, or where to procure their materials from. PnP’s training and starter kits gave them the jumpstart they needed, and then, we did not have to rely on government programs. To this day, the beneficiaries are very happy with their livelihoods.

NextBillion.net: What’s next for you?

Kaushik: An important learning from the PnP experience was that stable livelihoods are critical for the ultra poor to move of poverty. During the course of the pilot, I was excited with these people’s ability to pay for services. This is against the general perception among development practitioners. I am currently working on a sustainable model that will provide stable employment to the ultra poor.