Editor’s note: This post originally appeared on the Acumen Fund blog and has been cross-posted here with permission.

It was 8 o’clock on a cool October morning and the sun was shining brightly, lending its warmth to the crisp morning air. We were standing outside the gates of a government run primary school, in rural Uttar Pradesh, one of the most underdeveloped states in India. We could see a number of children, between the ages of five and ten, playing in a small ground outside their classrooms. The ones who saw us giggled sheepishly.

There was a small, dark shop just adjacent to the school, lit by a weak bulb. There was a counter at the front and a few racks on the wall on which numerous items were neatly arranged; biscuits, sweets, soaps, notebooks, stationery, and a few varieties of chips.

A tall thin man came out to greet us. His name is Pradeep and he’s been a shopkeeper here for 6 years. We soon realize he’s due for a supply of products from Drishtee, and shortly after we see the Drishtee van approach. The van quickly unloads, and various cartons are handed over to Pradeep, who pays the smiling, Drishtee employee.

And action! The children from the school ground run over and form a line. Suddenly there is a din of ‘Uncle! One sweet!’, ‘Uncle, three pencils!’, ‘Uncle, one packet of chips’.

After the mob of tiny customers dissipates, Pradeep tells us that business has been good since the van has started coming to his village. Earlier, he used to go to the main market which was more than 25 kms away and bring all these items to his shop. Now the van comes once a week and replenishes his supplies for cheaper than what he used to pay at the main market. The Drishtee products distribution facility has also informed him about new products. He has experienced a significant improvement in his livelihood. This is what empowerment looks like.

Back inside the car, I could not help but ponder over the fact that social impact is also about bringing new things and ideas to places where there are none. I thought about how these kids, living in one of the most underdeveloped areas of the world, are getting access to things that they previously had no idea existed. Kids, who had never had access to things from the urban areas, are now more empowered simply because they have such access; the bridge between urban and rural has been bridged by this access.

We drove down disappearing roads deeper into the rural areas, and past significantly smaller dwellings. After meandering through the rough mud roads, we finally came to a halt in a small hamlet. As we got down from our car and moved into the village, we noticed that more and more women had their heads covered with the side of their saris. We were told that this was a custom in rural areas of Uttar Pradesh. The women are required to cover their faces with the end of their saris and not show their faces to strangers.

Our guide from Drishtee, Sachin, led us to a shop. It was a normal provision store, much like the one we had seen earlier – however this time, the shop occupied an extended part of a house. Just as we arrived, a woman – in her mid-thirties came and greeted us with warmth. 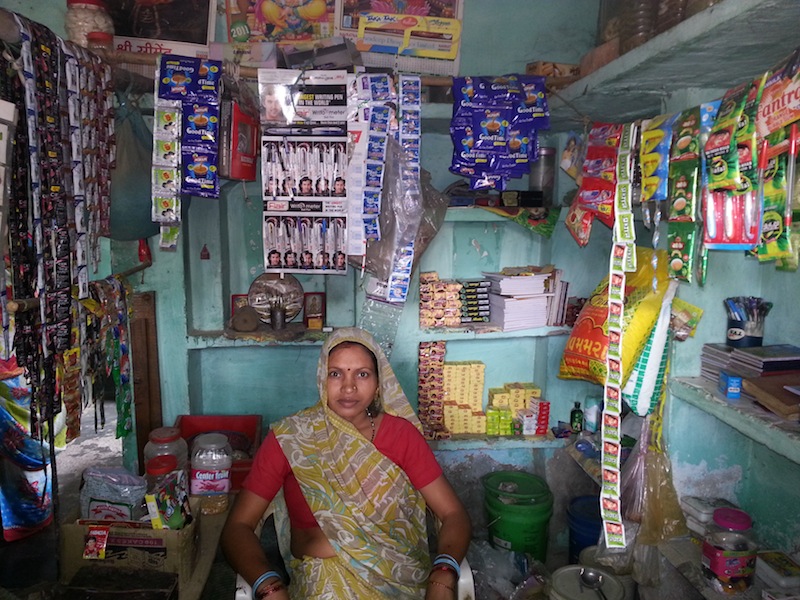 She told us that her husband ran a bicycle repair shop. With the meager income that he could generate, it was getting difficult for them to make ends meet. It was then that she came to know of the microloan facility provided by Drishtee. She approached Drishtee and was sanctioned a loan of Rs. 10,000 (180 USD) with which she opened this provision store in her house. She started earning almost as much as her husband used to earn and she also managed to repay the loan in a year. In the next year, she took another loan of Rs. 20,000 and increased the number of items she sold. Subsequently she managed to get her house repaired and painted; and perhaps most importantly, send her children to a good school with proper shoes on their feet. She was happy – but what was more apparent was that her face and head were uncovered by her sari. She carried herself with dignity. It was a sign of how much Drishtee had impacted her. She had become a role model in her community – empowerment once again.

(Above: a woman who has received loans from Drishtee watches over her provision shop).

We moved on towards a bigger village – but still far removed from the conveniences of the modern world. After an hour, we stopped in front of a computer education center which was situated in the village market. We were greeted by a 25-year-old man named Manoj. By the way Manoj dressed, we could see that he had lived in a city. Manoj led us inside the computer education center. Every one of the 5 computers was occupied in the center, and in fact some were being shared by more than one student. Manoj explained that he had gone to Mathura (a large town) for his education and learned how to use a computer and basic software. After his studies he wanted to return to his village to be with his family, but he didn’t know what to do for a living. It was then he came across an advertisement where he learned he could become a Drishtee franchisee and set up a computer center. And so, Manoj approached Drishtee.

He explained that his center was the first of its kind in his village (the closest one being 10 kilometers away). With the penetration of mobile phones and cable networks in the villages, there was an increasing awareness about computer literacy – which meant a high demand that Manoj could satisfy. His center had already given learning certificates to more than 300 students (ranging from school children to college students) and he now had a decent source of livelihood and income. He also explained that he was the first one to get an internet connection in his village and now he also offers railway reservation and email services to the locals. He was a role model for the youth of his village – another story of empowerment thanks to Drishtee.

Whether it was affordable access to basic goods, provision of livelihood through the franchisee model, or vocational training – I could see the high social impact that Drishtee was having on low-income communities in rural India. As we were driving back to the airport, I felt a sense of pride and satisfaction at being part of an organization whose efforts have made so much of difference in the lives of so many people in so many diverse ways.