How Low- to Middle-Income Internet Users View Data Privacy and Protection: New Research From India and the United States

One notable side effect of the COVID-19 pandemic has been the increased adoption and expansion of digital services. Digital portfolios – the wide range of digital services that a consumer uses – are becoming more complex, even for those at the bottom of the pyramid. These consumers – especially those with smartphones – are using more and different types of apps and digital services. And as their family and friends are also attracted to these apps, they’re adopting more methods of sharing these digital devices and services. As these portfolios grow, it is becoming increasingly critical to create a sense of inclusion and confidence, especially in the newly-digitized, to enable them to effectively navigate the digital world and avoid the vulnerabilities that can result from services based on data sharing.

Thanks to generous sponsorship from PayPal, I spent the past several months speaking to a small sample of low- to middle-income men and women in the U.S. and India, with the intent to probe themes relating to their experience, behavior and attitudes in the digital world. These themes have included everything from digital financial services, social media and communications, to mapping, streaming and gaming – in other words, every digital service a consumer might use. In addition, I mapped what type of channel is typically used for each service – e.g., mobile data, WIFI or public internet – as well as what type of device is used, as these factors imply a second and third layer of data sharing (what I refer to as “digital exposure”) for consumers, beyond the exposure that happens with the service itself.

The nascent work on digital portfolios and data philosophies reported in this article suggests that consumers can articulate thoughtful and nuanced opinions about their data sharing, and that they have the desire and capacity to absorb new information to increase their knowledge and confidence in participating in the digital world. I’ll explore the findings in detail below.

Even the Newly Digitized Have Digital Portfolios

One of the individuals we interviewed was Lakshmi, a 16-year-old secondary school student who lives with her mother and father in Ongole, Andhra Pradesh, India. Her family has shared access to two digital devices: Her father has his own basic cell phone, which he uses to make and receive calls. And the family also has a smartphone that Lakshmi mostly holds, but that is also used by relatives who live close to her – particularly her 17-year-old male cousin. The diagram below illustrates how each family member uses this shared smartphone. 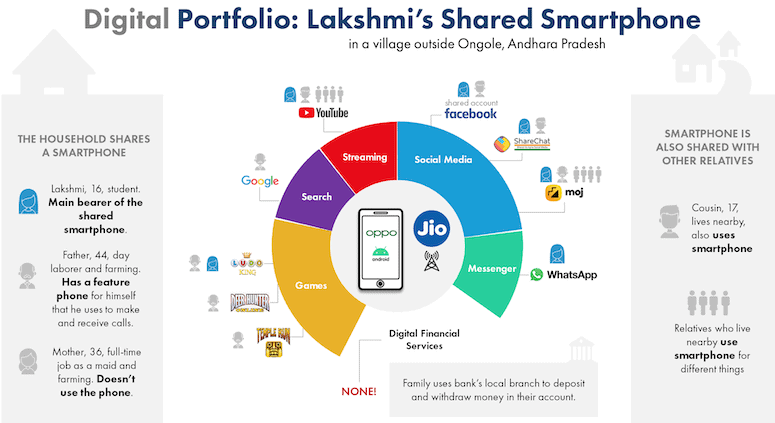 Diagram 1: Example of a digital portfolio at the bottom of the pyramid

As the diagram shows, the digital exposure for this family, and this phone, come from nine different apps, as well as the mobile data provider Jio. Moreover, the fact that this is an older Android phone means that security features are no longer supported, creating additional exposure to cybersecurity risks for the family.

When asked how she feels about different aspects of her data exposure on the smartphone, Lakshmi expressed that she is aware, albeit imperfectly, of some of the risks – as were the majority of both Indian and American respondents in this study. Nonetheless, respondents were able to articulate different types of data privacy “philosophies” – i.e., their beliefs about data privacy – across their digital portfolios, as detailed in the graphic below. Most of these had already been identified by researchers at the University of California San Diego, Stanford University and Carnegie Mellon University, but we detected two more in this small sample.

However, more importantly, we found that people did not hold monolithic data philosophies that they applied to all services in their portfolios. One person tends to have several different data privacy philosophies across the different parts of their portfolio. This was consistent across both Indian and American respondents.

Take the example of Catherine, below. She expressed fatalism in describing her data philosophy – i.e. the idea that when one enters the digital world, one gives up any sort of data privacy. However, she applied that viewpoint only to her social media (mostly Facebook) and the news she reads online. And with respect to Facebook, she also expressed that she should take some personal responsibility for her own data protection. But she did not apply that philosophy to her use of Google browser: In that case, she felt that she had “nothing to hide” – i.e., if the search engine is gathering data on the web pages she is looking at, she doesn’t worry. If she had one overriding philosophy about her portfolio, it would be the idea that she would welcome a trade-off – an ability for her to earn financial benefits from the data she’s sharing across her portfolio. These different views on data are highlighted in the graphic below. 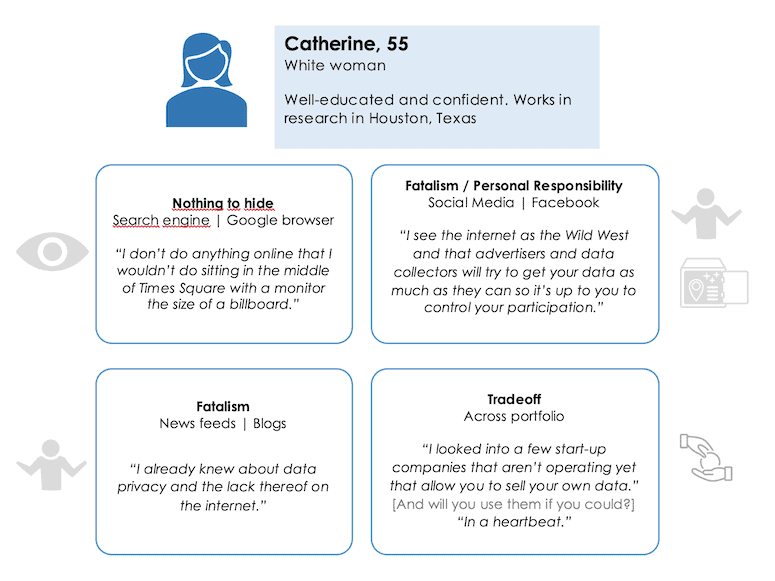 The main takeaway from these findings is that the evidence suggests that consumers cannot be segmented based on a single philosophy. We cannot say that Americans tend to hold this type of philosophy while Indians believe that, or that older consumers have one data philosophy versus younger consumers. Rather, consumers need to be understood as having a complete set of individual data philosophies, and these are likely to be different across different types of services.

Do Consumers Really Care About Their Data?

So do consumers in the U.S. and India actually care about how their data is collected and used online? Our short answer is yes: Part of the evidence base we gathered resulted from the fact that consumers were able to speak in a thorough way about their thoughts and feelings in these interviews. This showed that they had already thought through these issues, even if they were missing the full information about what data they were sharing and how it was being put to use.

An example is an exercise we did with respondents, who all used at least one Google service. We had them log into Google Takeout, which is a site offered by Google that shows all the data the company keeps on users and allows them to also opt out of this data collection. None of the respondents had been to this site before, although they found it easy to log in and check it during the interview. Their responses were typically in a sequential set, as respondents reacted in concern about how much data was kept, then had a moment of understanding about why they might receive targeted ads, then a generally positive reaction that Google would offer this site, then (again typically) a less concerned attitude than they initially showed about whether they would opt out of data sharing. The graphic below illustrates this progression of responses.

Diagram 4: A stylized reaction journey from looking at Google Takeout

Interestingly, in this sample, no one opted to stop sharing data – even though they were already on the site at that moment and could easily do so with the push of a button. Nonetheless, although they did not take visible action to change their data sharing, they expressed increased confidence – both in Google, for making this information available, and in themselves, since they now knew more about how the company was using their data.

The bottom line is that even though consumers only partially know what data is kept and how it is used by their digital service providers, they are capable of absorbing new information on data practices and articulating their reactions and preferences. This might not result in a change in behavior, but it does seem to generate a new level of trust in themselves and their providers.

What’s Next for Data Research?

This research, even with a small sample size, hints at rich insights about a topic that’s essential to ensuring an ethical and engaged digital world – including among internet users at the bottom of the pyramid. It also offers important insights for providers that can help them to better understand how they can build trust with their customers.

However, with such a small and limited sample, this study barely scratches the surface. We don’t know if these conclusions will hold if we look at larger samples, or extend the study across a breadth of populations. We also don’t know the most effective and efficient ways of increasing consumer understanding of data sharing practices across their digital portfolios – nor do we know, at scale, what reactions and potential changes in behavior could result from this knowledge. But if we want to build trust in the digital world and confidence in navigating it, among internet users in both developed and emerging countries, it is critical to get some answers.

Daryl Collins is the CEO and Founder of Decodis.