Technology can either revolutionize development services by lowering costs and expanding access, or it can be a costly investment that doesn’t adequately address the reality on the ground. When done correctly, technology can eliminate inefficiencies, collect valuable information, and expand access to critical services. However, technological solutions are not implemented in a vacuum; they are often replacing indigenous, ad-hoc, organic approaches to daily challenges. These ad-hoc solutions can appear incomplete and messy, but they reflect the knowledge, instincts, and relationships of the parties involved.

As Farmerline and BFA learned in Ghana, when competing with an existing ad-hoc solution, the technological solution must go beyond the technical fix to reflect local know-how and temperaments, to be attractive enough to overcome switching costs for the users.

In 2016 we met Moses, 52, a smallholder cocoa farmer receiving training and resources from FIBR partner, Farmerline, a Ghana-based technology company. Moses farmed cocoa, bananas, and food for his family, and sold his produce to Kwame, a purchasing clerk (PC) who paid market price for the cocoa at harvest time.

Although Ghanaian cocoa farmers practically have a guaranteed market for their harvest and experience stable prices, they are unable to access financial services because bank services, especially credit, have stringent eligibility requirements, such as records of previous banking transactions.

In response, Kwame would often extend Moses small amounts of credit (up to 50 Ghana Cedi or ~$11.30 US) from his personal working capital to help Moses purchase farming inputs such as additional seed and fertilizer. It was a win-win situation for both Kwame and Moses; with more and better inputs, both of them would have more cocoa at the end of the season. But, as with other farmers and PCs we met, Kwame didn’t always have money to lend, and output would suffer. Moreover, Moses’ track record with Kwame was informal and could not serve as evidence to pursue formal loans.

To address this challenge, in 2016 Farmerline and BFA partnered through the FIBR program to develop an app that: 1) builds a digital trail of farmers’ borrowing and repayment history with PCs and, 2) links PCs directly with the bank to access additional sources of capital. As illustrated below, the digital trail can be used by banks as a proxy for a formal credit history to support loan applications. In addition, the app links PCs directly to Farmerline, thus allowing them to apply for and disburse loans to farmers using a mobile money platform. 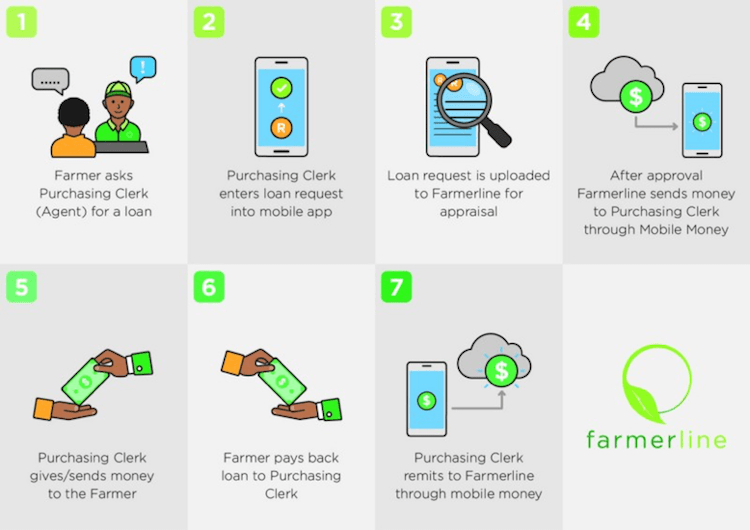 Next, through an introduction through FIBR, Farmerline received a Field Partner loan from KIVA to launch a pilot, which ran from October 2016 to March 2017. A total of 101 loans worth US $9,400 were disbursed through 18 PCs. Of these, 68 percent of loan recipients were first-time borrowers with an 82 percent on-time recovery rate. Ninety-one percent of the principal was recovered.

Although the pilot confirmed an appetite for loans among farmers, it also revealed the need for the product design to more closely reflect knowledge, ideas and understandings on the ground. Farmerline concluded that loans needed to match the particular timelines, mental models, and digital comfort levels of the farmers for the app to succeed as originally hoped. While PCs like Kwame could account for these particularities intuitively, Farmerline needed to account for them through careful, sensitive and flexible design.

Agricultural loans need to be tailored to match the crop cycle

The cocoa growing season in Ghana runs from November to January but, during the pilot, most of the loans were disbursed between November and December with a 3-month repayment period. Since this coincides with the peak of the season, farmers expressed lower demand for the loans. Furthermore, when repayments were due in the following year, after the major harvest period, farmers found it difficult to repay since their income from cocoa sales had already tapered off. Farmerline realized that loans should be disbursed between April and June to allow farmers to purchase inputs in time to prepare the fields, with a longer repayment period to match famers’ revenue streams.

Prior to the pilot, credit extended by PCs functioned as an advance to be deducted from cocoa revenue at the end of the season in one bulk payment. The farmers did not think of repayment in installments, rather they imagined PCs “owning” a portion of the revenue at the moment it was earned.

When Farmerline introduced monthly installments, the concept escaped most farmers. As long as the loan was repaid within 3 months, they did not believe it to be in arrears. Thus, any payments made before the end of the term were considered optional “savings” towards the loan rather than obligatory fixed payments.

While smartphones allowed PCs to avoid numerous trips to the banks, which were expensive and inconvenient, most PCs were new to smartphones and required a good deal of training to understand and use the app. Many PCs even requested younger relatives to operate application for them. Moving forward, Farmerline is considering training a member of the local community to serve as a support agent for the app.

Similarly, using mobile money in remote regions was a challenge. PCs reported that a lot of the time agents did not want to cash in transactions since they did not generate agent fees. Instead, agents would force PCs to remit the money, which generates fees but also creates delays in logging the payment thereby flagging loan payments as late and undermining the value proposition of the app. Furthermore, often agents would not have enough float to complete the transactions so the process would stall.

To resolve issues related to agent involvement, Farmerline will establish systems to support agents to disburse and collect loans, including establishing groups for peer monitoring. In addition, a field agent commission structure will be introduced to encourage timely loan repayment.

In all, Farmerline feels the app has promise to offer better and more services to farmers and is resolved to address the issues above. It aims to use the app to partner with a financial services provider to extend credit, inputs and potentially savings products to at least 5,000 farmers by the end of 2017.

Asa Nyaga is an associate at BFA, a NextBillion partner, working on financial technology projects that seek to enable access to financial services for people and communities who are financially excluded.

Photo credit: Department of Foreign Affairs and Trade, via Flickr.