Editor’s note: The following is one of several previews posts leading up to September’s SOCAP 11 Conference on Sept. 6-9 in San Francisco.

Question: What do a 24-year old French performance artist and a 35-year old Indian electrical engineer have in common?

Answer: Each has mastered a delicate balancing act, integral to his survival.

In August 1974, a young French high-wire artist named Philippe Petit performed perhaps the most astounding stunts in modern history: he covertly strung a tightrope between the two towers of New York’s World Trade Center. For more than an hour, he balanced 1,350 feet above the ground, evading arrest and capturing the attention of millions of New Yorkers. Quite literally, Petit’s balancing act was his career – his life depended on its successful execution. His story was re-told in the Academy Award-winning 2008 documentary, Man on Wire.

Fast forward to 2005; Gyanesh Pandey had heard “no” before. They said it was impossible. They-the scientists at India’s premier research institutions-told him that rice husk waste was chemically unsuitable to be used as a fuel. Sugarcane worked; bagasse too, but the predominant agricultural waste of India’s poorest regions didn’t burn hot enough, or clean enough, to power electricity generators.

Pandey, however, was not one to take no for an answer. An electrical engineer working in the semiconductor industry, he spent his weekends building a series of test gasifiers, each version more appropriate for the rice husk fuel he knew was out there. Finally, after a seemingly endless series of dead ends, he arrived at a design that could work. Excited at the potential of his creation, he looked for money to build it out in his family’s native village, Tamkuha, in the northern Indian state of Bihar. Finding no takers, Pandey liquidated his 401(k)-paying a penalty -and set up the gasifier, filtering system, retrofitted diesel engine, and wiring scheme with the help of his partner and college friend, Ratnesh Yadav. In August 2007, they inaugurated the plant and brought electricity to Tamkuha for the very first time. With a second plant in a nearby village, Pandey and Yadav launched a new company, Husk Power Systems. 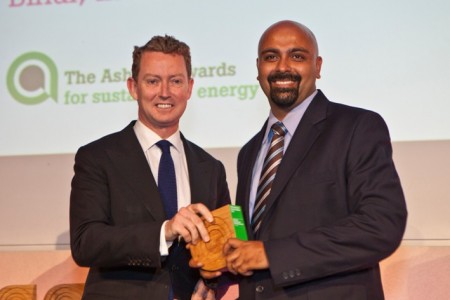 Pandey is a charismatic leader with a mission he calls “power to empower.” He has used his increasingly public profile and the power of his mission to raise a substantial amount of philanthropic funding. This funding-which has come from foundations and business plan competitions-is crucial to Husk Power as scales its business model. The company also benefits from offers of volunteer support from all over the world, including people willing to travel to Bihar to work for free. The mission of providing affordable, renewable power in communities that otherwise lack access to formal energy services clearly is compelling. Staying mission-focused – and pursuing the money that comes with it – is a priority.

But the company’s operating margins are also quite attractive. The village power plant systems should pay for themselves within two to three years; with that in mind, the business has attracted risk capital from Acumen Fund and investors like Bamboo Finance and Draper Fisher Jurvetson. Of course, the projections depend on good management – especially from those at the top.

Making things even more complicated, enter the government. In 2009, India’s Ministry of New and Renewable Energy granted Husk Power a capital expense subsidy, making the company’s financials economically compelling for investors, even impact investors. But even more exciting is the fact that Pandey and his team are working with the government of Bihar to write the regulations for how rural biomass gasification can benefit from these exact government subsidies as they scale. If successful, the mandate for government funding will grow these systems more rapidly than either the compelling mission or the attractive margins would by themselves.

Without grants and private investment, Husk Power would not have gotten started, but without the mandate from the government of Bihar, the company is unlikely to scale.

Managing that balancing act, even with both feet firmly planted on terra firma, is as harrowing for the social entrepreneur as it is for the tightrope walker. A few false steps – should I meet the government? Which is the wrong funding? Is the volunteer really going to add value? – and the show’s over.

At Acumen Fund, we’ve walked the tightrope to scale and sustainability alongside more than 50 firms in the past 10 years. Some have made it; others have not. Along the way, one thing we’ve learned is that there is no single path to scale for the successful impact investee. Rather, social entrepreneurs must purposefully navigate the path to scale keeping in mind three directions: mission, margin and mandate.

To learn more about the paths to scale, pick up a copy of the newly released SOCAP11 special edition of Innovations Journal, focused exclusively on the impact investing space. You’ll find an essay (page 69) entitled Mission, Margin, Mandate: Multiple Paths to Scale.