Microfinance’s Irresistible Story: Already mythic in scope, the next chapter’s under way as the 17th Microcredit Summit begins

The 17th Microcredit Summit is under way in Mérida, the capital of the state of Yucatan, Mexico, and NextBillion Financial Innovation Editor James Militzer is attending. Here’s his report on Day 1 of the event.

Perhaps no sector better embodies the core tensions of social business than microfinance. When the product for sale is money itself, concerns over pricing and profit are reduced to their most elemental form.

The development of the sector has followed a dramatic arc that’s almost mythic in scope – it’s an irresistible story. The brainchild of a Bangladeshi economist, microfinance stunned skeptics by showing that lending to the poor could be a sustainable business model. The approach spread around the world, its founder won a Nobel Prize and became a beloved global icon …. then it all fell apart in a cascade of excessive profit-taking, overindebtedness, sobering research undermining its claims of poverty alleviation and, worst of all, tragic debtor suicides.

Now the sector is trying to write the next chapter. Though microfinance has picked up the pieces and refocused since the Andhra Pradesh suicides shocked the world, its “rise and fall” narrative still lingers. At Day 1 of this year’s Microcredit Summit, this story formed the unspoken backdrop for many of the discussions – and sometimes emerged, quite jarringly, into the foreground.

The effort to refocus on clients was a common theme from the start of the event, when Norma, a local microfinance client, took the stage in the opening ceremony. Wearing a traditional Yucatan dress, she spoke about her family’s struggles with poverty and how microcredit has helped her turn things around by starting a business. You could almost sense people thinking, “Now this is how it’s supposed to work.” 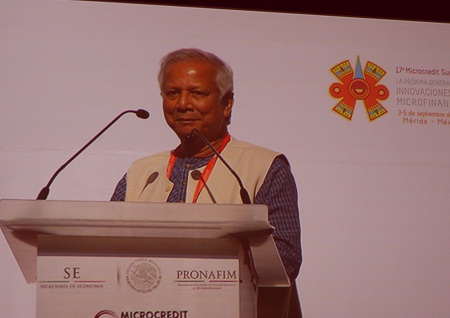 Her brief, spirited talk was followed by a number of (considerably less brief) speeches from Mexican government officials, Microcredit Summit Campaign Director Larry Reed, and Muhammad Yunus himself. More than one speaker wove in some local color by mentioning the Mayan calendar and the apocalyptic fears it inspired when the calendar ended a few years ago. “For the Mayans it wasn’t the end, but the beginning of a new calendar,” said Reed. “We’re part of that time now. When we bring in this new world, we want our legacy to be that extreme poverty no longer exists, that people in the next generation can look back and say that they’ve received a world that was better than the previous one.”

(Muhammad Yunus on the big screen at the summit, Day 1, left.)

Yunus took up that message with some inspirational words whose quiet tone masked a heated undercurrent. “We should make poverty and unemployment a part of history, so future generations won’t understand what the words mean,” he said, before alluding to the challenge that stands in the way of that goal. “It’s a crazy situation around the world. A handful of people own all the wealth. Eighty-five people in the world own more wealth than the bottom half of the entire world’s population. Do you call that a system, or do you call it robbery in the name of a system? Poverty is not created by poor people, it is created by the system we have built. We have to challenge that. We want to create a counterforce, a counter financial system where you bring opportunities to those at the bottom. It’s very difficult, but we don’t give up just because it’s difficult – it makes us more determined to make it happen. And that’s what this summit is about.”

The theme was made more concrete in the next plenary, “Ending Extreme Poverty,” which moderator Larry Reed started with an audience poll. “How many believe we can end extreme poverty by 2030?” he asked. Very few disagreed – which may seem like a surprise in the face of such an ambitious goal. But as the panel progressed, reasons for optimism soon became apparent.

Panelist Alfonso García Mora, practice manager at the World Bank USA, discussed the bank’s 2013 decision to endorse two new goals: bringing an effective end to extreme poverty by 2030, and shifting from a focus on average economic growth to promoting income growth among the bottom 40 percent of people. “The main idea is that the World Bank is changing the way we operate,” he said. “Everything is focused on these two main goals, and everything we do needs to demonstrate that it’ll have an impact on these two specific goals.” Financial inclusion, he said, would also be a crucial element to achieving them. “The (World Bank) president also set another very ambitious target – that by 2020, 95 percent of the population will have access to finance. Today, over 50 percent still don’t have access. We think this is the first step, giving people the tools to get out of poverty and into shared prosperity.” 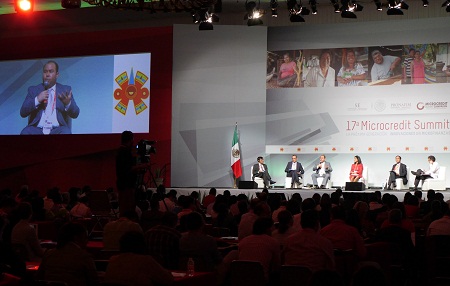 But later in the session, Reed polled the audience on how these ambitious goals could be reached – and the results were surprising. “How many of you believe that we can’t end extreme poverty without governments making massive investments in caring for poor people?” A tiny minority agreed, prompting what might be called a polite smackdown from the panel.

(The summit is the largest microfinance gathering in the world.)

“Government support gives a program tremendous momentum,” said Harsh Kumar Bhanwala, chairman of India’s National Bank for Agriculture and Rural Development. “In India, we opened 15 million bank accounts in a single day when the government launched its financial inclusion initiative. This would not happen if there was not governmental support.”

Tara Nathan, executive director, Public Private Partnerships at MasterCard, USA, added a related point. “Access to financial services has a continuum, and the first step is at the identity level. In many countries, you can’t even identify who an individual is, so that they can open an account, send or receive payments. So we have agreements, like with the government of Nigeria, where the national ID will have a payments capability. We see this as one of the largest financial inclusion initiatives in the world.”

Nathan elaborated on the role digital technology is also playing in fighting extreme poverty. “There are no banks or MFIs in remote locations, and that’s where the power of the mobile phone has done wonders in increasing access for the disenfranchised,” she said. “And we’ve had a number of innovations where we’re leveraging MasterCard’s technology and core capabilities in unique ways – like our partnership with the World Food Program, that delivers humanitarian aid digitally, on a card. And the great thing is, it’s not one and done – that infrastructure can be leveraged in the future, and all those people with cards, and merchants who accept payments, can be considered as financial included.”

The day ended with a number of workshops, among them the blandly named but surprisingly intense session “Responsible Inclusive Finance: From Intent to Action.” At this session, the ghosts of microfinance’s recent struggles were clearly present.

The workshop was intended to help attendees make sense of the sector’s many self-regulatory efforts, including Truelift, the Smart Campaign, MFTransparency and others. Many of these initiatives offer self-assessment tools that allow MFIs to identify their weaknesses. For those that address these issues, some initiatives offer certification in various aspects of client-centric practice. 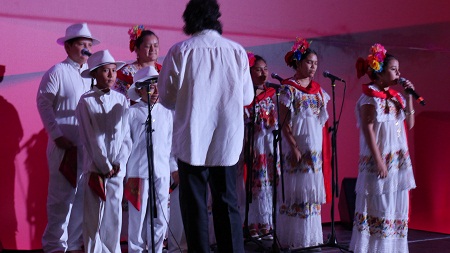 According to moderator Cara Foster, associate for outreach to Latin America at Social Performance Task Force USA, these efforts came about in response to “crises in microfinance markets around the world, some of which have led to negative media attention.” Alex Counts, president and CEO of Grameen Foundation USA, put it more bluntly. “Some years ago it became clear that there were people doing microfinance in at least a partially unethical way. And others were doing it in a purely profit maximization mode – and as long as they’re doing it ethically, there’s nothing wrong with that. And there was a third group doing it ethically, and with social goals. And people got confused, because all three called themselves microfinance. We’re trying to distinguish between them. The goal is to focus on products that don’t harm people, and that do good. If we do this right, making sure that products are better and more customized, we can reclaim the brand.”

As Yunus himself quietly entered the room, the panel started taking questions from the audience. Some dealt with the resources an MFI would need to dedicate to improving social performance. Anne Hastings, director, Microfinance CEO Working Group USA, responded: “I think the reality is the amount of time it takes an institution to make change. You need to set up task forces in your institution, around particular issues that happen in the field. And it can be time consuming. It is so important to do it though, that we really have no choice. Figure out where your weaknesses are, then set your priorities. But expect that when all is said and done, you will have spent tens of thousands of dollars.”

Perhaps sensing some reservations among the many practitioners in attendance, Counts tried to soften the blow. ”To implement these things, you generally don’t need to purchase new technology or hire new staff, and the cost of the rating is generally a tiny percentage of an organization’s annual budget,” he said. “And it really contributes to solving other nagging problems in an organization, and ends up saving time and resources.”

Finally, a questioner asked how these standards help clients avoid over-indebtedness in an environment without credit checking bureaus, mentioning Andhra Pradesh. While other panelists responded, Counts promptly took issue with the question. “On Andhra Pradesh, the issue of over-indebtedness has been grossly exaggerated,” he said, asserting that the linkage was a political move by local government to put private microfinance out of business to make room for public alternatives. “MFIs are being vilified without any data, and without having third party standards to provide that data, they left themselves open to that vilification. So (self regulation) is an issue of doing the right things, but also having a case to tell to regulators and the media, that can show that these exaggerations are baseless.”