In Haiti, insurance payouts are landing in the bank accounts of small business owners as fast as Tropical Storm Isaac landed onshore.

From the Wall Street Journal:

The program is an example of the growing use of so-called microinsurance to help protect some of the world’s poorest people from the devastating economic effects of catastrophes. While business owners in the developed world count on insurance to help them rebuild and recover after a disaster, people in places like Haiti have historically had to start from scratch.

Haiti, plagued by more than its share of devastating earthquakes and floods, is Exhibit A for how Mother Nature can deliver massive setbacks. Fonkoze’s borrowers, which include shopkeepers, hairdressers and farmers, have suffered major losses in recent years.

“For many years, I watched women entrepreneurs struggle to climb the ladder out of poverty, only to be knocked down time and time again by catastrophic losses from hurricanes or earthquakes,” said Anne Hastings, CEO of Fonkoze. “Now for the first time, MiCRO has made it possible for those women to quickly recover their losses, rebuild their source of income, and avoid a potential poverty trap.”

MiCRO offers its clients a unique hybrid insurance product, or parametric policy: a set of weather-related triggers corresponding to wind speed, rainfall levels and earthquake magnitudes that offer a timely payout, combined with additional coverage to the extent that the triggers do not reflect actual losses on the ground.

“These women have the pride and dignity of being the valued customer of a commercial enterprise, not beneficiaries of charity,” said Neal Keny-Guyer, Mercy Corps CEO. 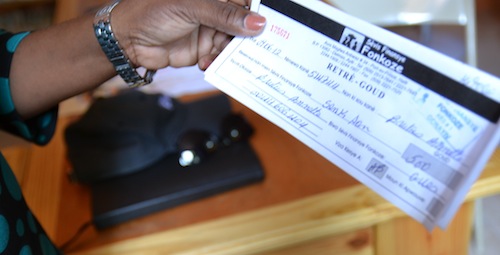 (Women will receive insurance payouts of $125 immediately, triggered by high winds and rainfall, and an assessment of additional damage and loss will calculate the rest of the payout. Photo: Jeremy Barnicle/Mercy Corps.)

Fonkoze took advantage of its existing infrastructure in Haiti, including 46 branches and more than 2,000 credit centers, to implement the insurance. According to the Wall Street Journal, Fonkoze “now requires most of its roughly 60,000 borrowers to contribute 3 percent of its loan values to help defray the cost of the insurance. That covers about half the cost of the coverage, with Fonkoze and its partners, including the governments of Switzerland and the United Kingdom, contributing the rest. Then Fonkoze’s insurer, called MiCRO, buys backup protection from Swiss Re AG, a massive reinsurance company that has been among the leaders in the insurance industry in efforts to develop microinsurance products.”

In the company’s first year, MiCRO has provided $1.64 million in payouts that Fonkoze has used to provide funds to nearly 6,800 Haitian women.

One of the key barriers to the growth of microinsurance is the cost of on-the-ground assessments and policy administration. To address this, MiCRO’s clients help determine whether fellow policyholders are entitled to additional loss-based payouts. This reduces costs and helps put the purchase of microinsurance within their reach, but further cost reductions are needed in the future for Fonkoze and MiCRO to meet ends and become profitable.