Mirror, Mirror on the Wall: Reflections on the next wave of water innovation

On my last trip to Rajasthan I visited a Rajput winter palace in Jaipur. The palace was adorned floor-to-ceiling with mirrors.  Intricately inlayed and imported from Belgium by the royal family who constructed the palace, these hundreds of mirror fragments weren’t installed to flatter royal vanity. Instead, theirs was a functional purpose – to magnify the heat generated from wood fires around the palace, keeping royalty and guests warm in the cold Rajasthan winters, long before central heating and electricity.

Three hundred or so years later, the same basic solution could be a lynchpin in devising a cost-effective water pumping solution in the same regions of India and beyond, and this time the beneficiaries would be small farmers whose lives have only improved incrementally since the times of royalty.

The next innovation in water?

The initiative, called the SunWater Project, is the brainchild of Paul Polak, a former psychiatrist, and author of the book, Out of Poverty, with which regular NextBillion readers will be familiar. Polak has been focusing on creating devices and systems to improve the lives of people living on less than $2 a day for close to three decades. The organization he founded relatively early in his career in BoP innovations work, International Development Enterprises (IDE), is responsible for critical innovations in the design and distribution of foot powered treadle pumps, and is probably better known for innovations that lowered the costs and increased efficiency of drip irrigation systems. IDE replaced conventional emitters with holes and micro tubes, creating modular systems that could be customized to shift water distribution lines to crops in small plots. Together with other design innovations, such as a hanging plastic water storage bag, IDE was able to create water savings of 30-70 percent in small plots, reduce labor, and increase yields in dry seasons.

Given the early focus on innovation in water harvesting and use, from treadle pumps to distribution, the SunWater Project seems a natural progression of next wave of innovation for Polak and his team. So what exactly is this initiative gearing up to tackle? 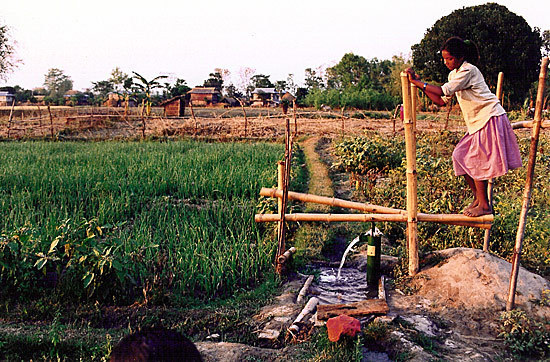 According to Polak, small farmers have come a long way since the heyday of the treadle pump (pictured left), and are now transitioning to diesel pumps which, he estimates, irrigate 2.5 acres of vegetables, and cost roughly $350 to purchase, $450 a year for diesel, and another $150 a year to maintain. That amounts to more than $2,000 over the course of three years. After that, the farmer continues to pay on-going diesel costs (which will likely go up as the Indian government removes subsidies on diesel fuel) and increasing repair costs over the life of the unit, which coincide with damage to the crop when the diesel pump is being repaired. Polak believes these costs are too expensive for poor farmers over the long term.

Polak believes that the solution lies in fundamentally re-engineering the affordability of solar powered (solar photovoltaic) pumps. A 2 kilowatt solar-powered pumping system that can do the same job as a 5 horse power diesel pump, coupled with drip irrigation and water storage solutions that already exist, can greatly boost yields for small farmers.

He concedes there are hitches to overcome with scaling solar technology, the most important being its prohibitive cost. Such a system would run roughly $7,000, far outside the realm of affordable for small scale and subsistence farmers. That’s why Polak and his team are launching an Indiegogo Campaign to fund the creation of a prototype that would bring the price down to targeted range of $1,500 to $2,500 – still expensive, but according to Polak, an affordable price point with appropriate financing, and less costly over the long term.

How can such a drastic price reduction be achieved?

It sounds like an improbably undertaking to bring the cost of a solar photovoltaic (PV) pump from roughly $7,000 to $1,500. But Polak has a plan to reduce costs, by reducing the use of the most expensive components of the system, the solar panels. Similar to the Rajput practice of magnifying heat through mirrors, Polak plans to calibrate mirrors to magnify the effect of the sun in his solar powered pump. To prevent overheating the system includes a simple metal water vessel on the back of the photovoltaic panel, through which a small portion of the pumped groundwater flows, keeping the solar panel cool. (Incidentally, the Rajputs dealt with same problem by simply lifting the heavy drapes that shrouded the palace occasionally to let the cool air back in whenever the structure was too warm).

It’s not rocket science, or is it?

To those that say water in mirrors isn’t rocket science, Polak notes with excitement that, in fact, it kind of is. Many of the team’s engineers are volunteers from Ball Aerospace & Technologies Corp, the company that developed science instruments on the Hubble Space Telescope, and other components of the space and rocket variety.

“We’re taking a whole-systems approach – we use mirrors to concentrate the sun, which brings down the cost of the solar cell. Since we’re pumping water, we use the water to cool the solar cells, increasing their efficiency,” Polak said. “We hook up an inverter so we can use an AC pump motor, which are widely available and cheap. Then we tune the mirrors, solar cells, cooling system, and pump so that it gives the right output for the right cost.”

In theory, these components, once well calibrated, should allow a limited amount of solar panels to produce higher outputs of energy. According to Polak, the fuel costs and operating costs would be close to zero with such technology, making it more affordable for small farmers in the long term.

And what of distribution, repairs and financing?

What happens when these solar pump components degrade or break down? Even at a price point of roughly $2,500, isn’t this huge undertaking for most farmers? And what of sales and distribution strategies? Polak is confident they will work out the right model, as long as they can get the technology prototyped and developed.  The business model he envisions “will integrate solar-powered pumping systems with a package of services including financing (lease to own or loan), support for design, installation and operation/maintenance training, and farm advisory services to enhance farming enterprise profitability.” He is convinced that existing partnerships with financial institutions who lend to farmers will make financing available for the product, and that several viable sales and distributions channels exist.

He emphasizes the importance of not over-planning things. “Everything changes based on our experience in the field. I believe in the process more than having a totally complete business plan.” He describes this process, informed over 30 years, as one of innovation and re-invention with the user as you go. “We go and talk customers and put the product in their hands and they tell us what is wrong and we fix it. It’s the same with the marketing plan, you put it into motion and see what works.”

Innovation on multiple fronts is required to extend solutions that scale at the BoP. While technology innovation can greatly help drive cost savings and platforms for scale, it’s the common sense adaptations to local contexts, and ground innovations in distribution systems, marketing and effective partnerships that tend to make or break a product roll out in these environments. It’s a fairly mammoth undertaking, but Polak’s approach to designing and prototyping development solutions may be just what solar needs to translate to the BoP. And it would be about time.

Click here to learn more about the crowd-funding campaign for the SunWater prototype and/or check out the video below.

Tags
Base of the Pyramid, energy, farmers, solar