Editor’s note: This article was originally published on Upsides, an online platform focused on responsible finance and sustainable development in emerging markets. Upsides is an initiative of FMO and Triodos Bank, which are investors in the hydroelectric project that is the focus of the interview.

In April, construction will start on Nepal’s largest private sector energy project to date: the Lower Solu River hydroelectric generating station. This run-of-the-river power plant is to provide reliable, clean and low-cost electricity to Nepal. With a total installed capacity of 82 megawatts, it should provide electricity to 3 million people or roughly 10 percent of the population. For a country that has faced a perennial shortage of power, the project is a significant step in alleviating Nepal’s power shortages.

The project sponsors include Clean Developers (at 23 percent), a Nepalese infrastructure company, Essel Infraprojects (49 percent), an Indian conglomerate active in the infrastructure sector, and four Nepalese companies. Upsides had the opportunity to speak with Ashish Garg, executive director of Clean Developers, who heads the project management team.

Annemiek Planting: Can you tell us a bit more about the energy landscape in Nepal?

Ashish Garg: It is true that Nepal has faced a huge power shortage for years. Due to demand growth and a lack of domestic power generation at the same time, this energy shortage is unlikely to change in the near future. And the demand is still increasing. Only 42 percent of the population has access to electricity to begin with. Ninety percent of the installed generation capacity comes from hydropower. Especially in the dry season this is a problem: with 20 percent of our population living in Kathmandu, the city regularly faces 12-hour power cuts during the dry season.

And yet Nepal has a tremendous hydropower potential of over 80,000 megawatts – if installed, it will become the second-highest hydropower capacity in the world. However, we only use one percent of this potential while we continue to rely on fossil fuels. Significant amounts of petrol are imported from India. Altogether, this is not a recipe for sustainable economic growth.

AP: With so much potential for hydropower, why does it take so long for these projects to come off the ground? 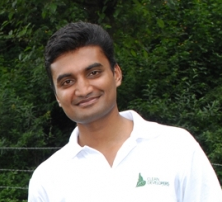 AG (pictured left): Even if we combine the credit appetite of all Nepalese banks, this will not be enough to fund Lower Solu. However, on the international financial market it is really difficult to win the trust of the lenders: we don’t have the proper structural framework in place, Nepal does not have the long-term funds required for projects of this size. With our politically unstable climate and an underdeveloped currency market – the Nepalese Rupee is not widely traded in the international market – liability is a concern to foreign investors. Along with the European development institutions including FMO, DEG, OFID, BIO and GuarantCo, this project has an inclusive approach with involvement of Nepalese banks as well. It is a marriage of two different worlds. It was quite challenging to achieve the many “firsts” and pave the way for the next era of hydropower development in Nepal.

Currently, 80 percent of the electricity from hydropower in Nepal is generated by the government. Lower Solu is our largest private energy-sector project to date, but also the first independent power producer (IPP) in Nepal to be financed by domestic and international lenders. The $142 million funded by international banks is the largest foreign investment in Nepal in decades times.

AP: How was the project initiated?

AG: That’s an interesting story. One of the major reasons why Nepal’s immense hydropower potential has not been tapped is that we had a faulty licensing regime. It was not based on qualities like financial standing or technical expertise. You simply obtained a license on a ‘first-come-first-served’ basis. Unfortunately, the wrong people got hold of these licenses. When a real developer comes along with the money and the expertise, he has to buy these licenses from the license holders. With Lower Solu, it was the first time that the government decided to evaluate the bidders via a stringent competitive bidding process. In 2010, the Nepalese government decided to evaluate bidding parties: those who were technically sound and had positive numbers on their balance sheet could make a bid. Additionally, they set a minimum bidding price of $1 million USD on the license. This way the government hoped to attract investors who were actually committed to developing the project.

And it worked! Eleven bidders from outside the country participated in the transparent bidding process. Clean Developers and Essel Infraprojects (in a join venture) won the project with our bid of USD $2.6 million. We evaluated the project with our own engineers and technical experts, making some modifications before putting it on the international market for financial exposure. And here we are, ready to start construction by the end of April 2015. The project should be operational in four years from now.

AP: Do you believe that this project may pave the way for other investors and future projects? Or do you see other hurdles to overcome?

AG: Well, someone has to take the plunge. Lower Solu may be doing just that for Nepal. The last sizeable foreign investment in hydropower was way back in 2000. Hydropower projects are long-term infrastructure projects that require a stable licensing policy and support from both the state and the all-round system. We have political instability in Nepal, so due to frequent changes in our government, a long-term, stable policy for the further expansion of hydropower projects could not be developed. India is a very important factor in our chances to further develop the sector as well: with a huge power demand in the dry, hot summers, we could export surplus production from Nepal to India, while importing from India during our dry season. Recently, a power exchange between India and Nepal was signed after a pause of 17 years. We are still not sure how stable we will be in the long run, but commercially we have a good proposition. If Lower Solu can happen, other projects may prove to be possible as well. There is a feel-good factor involved in this project. Another crucial issue is that along with the competitive bidding process, the government guaranteed to serve the interests of the banks by providing the necessary transmission lines from Lower Solu to the national grid. All electricity from Lower Solu will be sold to Nepal Electricity Authority, the state-owned monopoly electricity provider.

AP: Who will benefit most from Lower Solu?

AG: One could say that the entire country will benefit from the project. The electricity is strictly produced for Nepal; it cannot be exported. It adds 10 percent to the power capacity of the country, providing electricity to roughly 2 million households. Around 100,000 people live in the area where Lower Solu will be built. The power plant will offer employment both during its construction and thereafter when it is operational. Altogether it will improve the economic development of the region. Last but certainly not least, the project will have a positive impact on the investment climate in our country.

AP: What are the downsides? Will people have to be relocated?

AG: The beauty of the location of the project is that the population density is not high and both river and water are not used for households. Not a single household will need to relocate. Land will have to be bought locally, but the compensation price is higher than the market price. So in general people are happy to sell their land. We could not have had a more ideal site than this. People’s standard of living will improve as well.

AP: Were there unexpected hurdles in the project?

AG: When the government invited us to participate in the bidding process, we soon found that we had to get everything in place very quickly, meet the requirements of international lenders, etc. The government supported us in this, making sure we could start developing the project in 2012. However, due to frequent changes in the Ministry, Nepal Electricity Authority (NEA) and other key figures, due to the political instability I mentioned earlier, the project was delayed by two years. And yet we are much faster than other large-scale projects in Nepal.

AP: What made this project appeal to both domestic and foreign investors?

AG: Development banks like FMO and impact investors like Triodos Investment Management look for private sector projects with a high development impact. Lower Solu is just that. FMO took the lead in arranging a consortium of international and Nepalese lenders to finance the debt. We from Clean Developers were looking for a green, not-too-large project with international funding.

After the journey had started, liability concerns arose among international banks. When the Indian Essel Infraprojects came on board as the financial powerhouse, a good, solid backing was provided that encouraged both foreign and domestic parties to join in. Now we have a perfect mix of sponsors.

The loan financing documents were signed in December 2014, the commitment is there. It is a showcase for other investors in future projects.

Annemiek Planting is managing editor/advisor and journalist at Scripta Communicatie.