Net Impact: Getting to Profit in Africa’s BoP

S.C. Johnson & Son’s venture to supply cleaning products to entrepreneurs for sanitizing public bathrooms in largely slum areas of Mathare, Kenya, (with the ultimate goal of reducing the spread of sanitation remedied ailments like diarrhea), sounds like a perfect blueprint for a sustainable BoP business.

The venture, called Community Cleaning Services (CCS), derives its revenue from the operators of fee-based public toilets and communal toilets in apartment blocks. The public toilet operators, sell access to latrines to patrons, and use a portion of those revenues to pay CCS workers using a range of S.C. Johnson products to maintain those facilities. In apartment blocks, the residents of a floor will club together to pay the fee to CCS. CCS workers have a steady income of two- to three-times that of fellow Mathare residents, provide a valuable and rare service with cleanliness at or above Western standards, and are known and respected in the community by their distinctive uniforms.

Yet despite maintaining tight fixed costs, the venture has still not reached critical mass to reap profits and become self-sustaining. Started two years ago, CCS wasn’t set up to be a charity. And eventually, even the most patient of corporations with a losing proposition will have to ask, as S.C. Johnson’s management is asking, “’Where is the light at the end of the tunnel?’” said Chris Librie, Director-Global Sustainability at S.C. Johnson, pictured below. 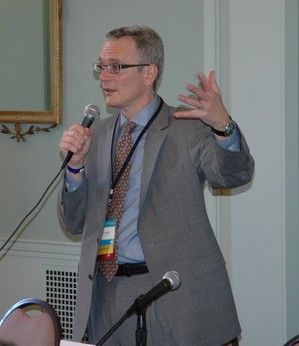 There is no immediate solution to this quandary, but answering hard questions is what Net Impact is all about. Mark Milstein, Director, Center for Sustainable Global Enterprise, Cornell University, which worked with S.C. Johnson in developing the business model around CCS, asked the audience to break into groups and brainstorm solutions in what became a living case study.

Ostensibly, S.C. Johnson doesn’t want to get into the bathroom operations business. But, at least in my group, that was one of the thoughts bandied about. A host of other suggestions were floated, from CCS partnering with health and educational NGOs, to creating marketing and advertising campaigns via cell phones, to reducing or reformulating packaging, to aligning with a microfinance organization. S.C. Johnson is already exploring some of these ideas, and is open to new approaches, Librie said. (Please join the discussion, offer your suggestions to either venture in our comments section).

In a much earlier stage project, Cornell’s Center for Sustainable Global Enterprise with funding from S.C. Johnson and the Bill and Melinda Gates Foundation, is investigating how to create a sustainable business around preventing malaria in Ghana. The fieldwork began this summer around a venture to sell S.C. Johnson pest control products. The maker of household products like Raid and Off spray doesn’t seek to compete with other solutions, such as bed nets or stronger insecticides, but to complement them.

After all, the consumer market for malaria fighting products is estimated at $6 billion. But actually harnessing that for a BoP commercial venture is far more complex than the simple math of market potential.

“Can we come in with more effective products; can we develop business models that actually help prevent the transmission of malaria? Those are compelling questions to be asking,” Milstein said. “It’s a far cry from what motivated early thinking in base of the pyramid.”