Editor’s Note: This article was originally published in On the Up and has been reposted here with permission.

Coca-Cola manages to reach every inch of the earth and when in Africa you can be sure to find a trusty bottle of the brown stuff, no matter how far you are from the nearest town. Whilst living in a remote region of Zambia in the 1980s, Simon and Jane Berry used to marvel at the might of the powerhouse brand. While there was a population density of two people per square kilometer, no mail service and no phone.

“And yet we could still get Coca-Cola!” they said to us in unison over a morning coffee.

Love Coca-Cola or loathe them, their domination is undeniable and many people, Simon and Jane included, see this as a huge opportunity for even greater things. But how could Coca-Cola actually help to save children’s lives? Child mortality remains shockingly high across Africa. Parents of three themselves, Simon and Jane were disturbed to learn in their Zambia days that “on in five died before (age) five.” When their two-year-old son fell ill to diarrhoea, they found out firsthand how life threatening a simple illness can be. Spurred on by this personal experience, they decided Coca-Cola could help.

Between them, Simon and Jane are always brewing up off-the-wall ideas. Jane told us with a smile, “We both have silly ideas but Simon has sillier ideas than I do and tends to hold on to them.” This “silly idea” was to use Coca-Cola’s distribution networks to deliver affordable treatments for childhood diseases to rural communities where medical care was scarce, but Coca-Cola was not. The initial plan was to persuade Coca-Cola to modify its crates, adding a pocket on the side to carry these medical supplies.

Today, armed with a much enhanced business plan, Simon and Jane are rebranding their “silly idea” as a solution to the provision of accessible medical aid across Africa. Twenty five years might seem like a long time to incubate an idea, but the journey from “silly idea” to solution has relied on perseverance and plenty of luck. Whilst in Zambia, they made their first attempt to contact Coca-Cola. With limited communications tools to hand, they opted for a fax and to no-one’s surprise, failed to raise a response. Simon and Jane then moved back to the UK, spent the next decade running a social business called Rural Net UK, and left the idea to lie. Or at least that’s what Jane thought.


In 2008, Simon was watching a live text blog of a conference called Business Call to Action. A brainchild of Gordon Brown, the conference was organized to challenge multi-nationals to see how they could assist development in Africa. When Simon noticed that the CEO of Coca-Cola was in attendance, his ears pricked up. The live blog was open for comments so he took another punt with his latest idea … “Why don’t you take one bottle out of every 10 in a crate and stick a container of aid into it?” he wrote. He waited patiently for a response from the CEO. Nothing.

By now aware that the “silly idea” wasn’t going to rest, Jane suggested that instead of asking Coca-Cola to take one bottle out of every crate, that they instead create a small container which would fit neatly in the excess space between the necks of the bottles. Eventually, Simon conceded that his wife was probably right (again). These containers, since coined “aid pods,” are still the solution of choice. Simon’s vision was firmly re-ignited and his next move was to set up a Facebook group called “Let’s talk to Coca-Cola about saving the world’s children,” that attracted near instantaneous interest.

Within a month of setting up the group, Simon made an all important move on BBC Radio 4’s Interactive PM Programme. This is the online component of the much loved ’PM Programme’ hosted by Eddie Mair. The story got picked up and was featured on the show.

Simon went back to his Facebook group and pledged that once they had 1,000 members, he would pick up the phone to Coca-Cola. After years of silence, the head of Global Stakeholder Relations was more than happy to hear from him. In the three years since, Simon and Jane have quit their day jobs and spent their time building this foundation. In 2009, they set up Cola Life, a social business, to finally deliver on their idea.

Though they run it from their country kitchen in the UK, Cola Life is an organization which has attracted attention from all around the world. Indeed, every idea that Simon and Jane have had about the development of Cola Life has been put out across on their online platforms (website, Facebook, Twitter, etc). From their community of 15,000 followers they ask for comment, analysis and challenge. Though Jane admits that it’s “a bit scary”, the couple have totally embraced the “open Innovation.” this approach known as ’Open Innovation’.

“You just go to the market with it and say ’What do you think of this?’, she Simon told us. Simon and Jane have used this approach to evolve every aspect of their business model.

In what Simon and Jane fondly call an “unlikely alliance,” they have orchestrated a partnership between Coca-Cola, SABMiller (second biggest brewer in the world and bottler for Coca-Cola in many parts of Africa), UNICEF and the Ministry of Health in Zambia. Together, these partners will be party to Cola Life’s first trial in Zambia, due to launch by the end of 2011. Aid pods filled with essential treatments for diarrhea will be distributed across Zambia on the back of Coca-Colalorries. 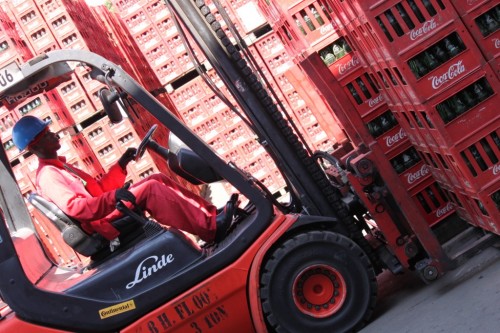 Developed in collaboration with their partners, the end-to-end model for their Zambia trial is leaps and bounds ahead of their very first idea. Coca-Cola outsources the bottling of its products to SABMiller (among others), which then outsources most of the distribution to local delivery companies. These companies then sell their crates to retailers running small to medium sized local shops. A vital element of the trial is that the aid pods will be sold at a low price. Firstly, the local delivery company will pay a per unit price for them. They will sell them to the local retailers for a small mark up. Retailers will sell them to mothers and caregivers for another small mark up. The cost to the mother at the end will be equivalent to the cost of 1-2 eggs. By putting a value on the pods, it increases the likelihood that they will get pulled through the whole distribution chain.

If the trial works out, Simon and Jane’s vision is to set up trials across the continent. Once the concept is proven, they want to hand it over to existing agencies. But before all that, a long list of unknowns lies ahead. Will local distributors in the business of moving bottles be willing to broaden their offering? Will mothers be willing to pay for health care products when they’re accustomed to receiving medical aid for free? Will competitor products like mobile phone talk time take priority over preventative medicines? The list goes on, but Simon and Jane are trying to foresee these challenges and are looking to their community to help them come up with solutions to suit.

When we visited SABMiller headquarters in Zambia’s capital Lusaka, Director of Corporate Affairs Chibamba Kanyama was candid about the challenges that could derail the trial. “People don’t want to be meeting Simon every day,” Kanyama told us, freely acknowledging that corporate social responsibility had to deliver something for them in return. Doubts aside, however, Chibamba was very excited about the potential and has placed Cola Life on the company’s list of CSR priorities for the next financial year. When we visited SABMiller’s central distribution centre, we too sized up the potential scale of Cola Life’s future. A technician explained to us that every day 20,000 Coca-Cola crates are loaded onto lorries for delivery. That’s 480,000 bottles of Coca-Cola (gasp!) but more importantly, at five pods per crate, that’s a potential of 100,000 aid pods per day.

Having now used up the small start up fund they received from Unltd (a UK organisation which funds social entrepreneurs), the most immediate priority facing Simon and Jane is raising the $750,000 they need for the Zambia trial.

Although the pods are sold at a price, they still need a subsidy of about $1 per pod to cover all the associated costs. Though Simon and Jane are looking to traditional funding streams for the trial, they are already hatching plans to make the model more sustainable in the long term.

For sure, the biggest test still lies ahead, but with so much interest and energy in their ideas, it’s hard to see how they might fail.?