Editor's note: This story, originally posted Aug. 17, has been updated with quotes from Rob Schneider, senior partnerships advisor for the U.S. Global Development Lab at the U.S. Agency for International Development (USAID).

That’s the advice Beth Keck gives concerning the case study “Walmart and USAID: The Evolution of a Global Cross-Sector Partnership,” which was recently published by the William Davidson Institute (the parent organization of NextBillion).

The teaching case describes the relationship that developed over 15 years between the world’s largest retailer and the U.S. government agency tasked with ending extreme global poverty.

It’s designed to spur classroom discussion on the role of cross-sector collaborations in addressing some of the world’s greatest challenges. It details why expectations grew, internally and externally, for Walmart to achieve greater social impact through its supply chains, and how USAID came to embrace the private sector in seeking integrated solutions to increasingly complex global problems.

Keck, senior director for women’s economic empowerment at Walmart, says the case holds value beyond the classroom. It’s “very helpful for self-examination,” she said, and can also be used in the development community, by non-governmental organizations not used to working with businesses; and by other global development organizations, including funders, interested in leveraging partnerships.

‘Stand back and have a look’

The case was written by Ted London, adjunct associate professor at the University of Michigan's Ross School of Business and senior research fellow at the William Davidson Institute (WDI), and Colm Fay, research manager at WDI. It was published by WDI Publishing.

London (pictured) said he relished the opportunity to investigate the Walmart-USAID relationship. “To my knowledge, it's one of the few cases that traces the evolution over more than a decade of two enormously influential organizations,” he said. “Both shared their strengths and challenges, and that’s refreshing. It brings forth issues around organizations that have different value propositions.”

Walmart funded the preparation of the case. Keck explained that the case-writing process was a way for the company to examine and analyze how it approaches partnerships. "One of the surprises for me was that we actually had several models of partnerships that we had used over the decades," she said. "It’s going to be very helpful inside Walmart, and I would hope USAID, from an institutional point of view. We have colleagues working on our global responsibility around the world, and understanding the mechanisms for structuring relationships can be very helpful for (them).”

London said the case will “help the partners themselves understand what had happened over the past decade and will help catalyze strategic thinking for both partners.”

Walmart stipulated that the case be made available free to anyone who wants it, Keck said: “We really did want what we have learned and gained from our relationship with USAID to benefit others who are looking at how to have an impact in the world.”

A pathway of understanding

The case discusses major shifts by both organizations that help explain their unique collaboration.

Walmart’s happened in 2005, after Hurricane Katrina and then Hurricane Rita hit the Gulf Coast in the U.S. Walmart’s disaster relief was faster and more comprehensive than even the federal government’s, and inspired then CEO Lee Scott to think what might be possible if Walmart used its size and capabilities to have a positive impact on society. In a famous speech, he set three goals for Walmart: being supplied 100 percent by renewable energy; creating zero waste; and selling products that sustain people and the planet. 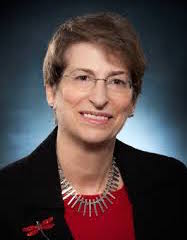 That speech, Keck (pictured) said, took the company “on a pathway of understanding that, yes, we have impact and we need to understand what that impact is. We should use our strength and size and scale for positive impact.”

The pivot was welcomed by stockholders and employees alike, she said. “And it’s actually helped us attract better employees because we get young people who want to work at Walmart because they want to have an impact on the world, and they see now through their job at Walmart they can have that impact.”

Meanwhile, USAID’s viewpoint changed more gradually, perhaps. By 2000, USAID had begun to look to the private sector not only as an essential element of transitioning economies, but as a source of innovative models for delivering development interventions. Then, in 2001, it launched more experiments with the private sector through Global Development Alliances (GDAs). Those experiences paved the way for the relationship with Walmart, beginning in the early 2000s.

Rob Schneider, pictured, senior partnerships advisor for the U.S. Global Development Lab at USAID, provides some background: "USAID has been committed to supporting developing economies through private sector-driven growth since its founding in 1961. We recognized long ago that in order to achieve long-term, sustainable development, we have to collaborate with and support the institutions, private sector partners and civil society organizations that are engines of growth and progress for their own nations.

"That said, there has been a definite increase of USAID’s engagement with the private sector in the last decade. Part of the increase has to do with globalization and the shifting global development landscape – the private sector now plays a larger role in developing economies. In 1960, public resources – largely foreign aid – accounted for 71 percent of financial flows from the U.S. to the developing world. Today, it stands at 9 percent, with 91 percent of U.S. financial flows to the developing world coming from private sources. We see working with the private sector as a necessity if we want to achieve our development objectives."

He pointed out that "USAID has built over 1,500 alliances involving more than 3,500 unique partner organizations in the last 12 years. At the end of 2014, USAID had over 250 active partnerships, with a total lifetime value of $3.6 billion."

The Walmart/USAID relationship had three distinct phases, according to the case.

The first began in Central America, where Walmart and USAID experimented with building the capacity of smallholder farmers. Walmart’s role was as a buyer from farmers trained as part of the program. While this model allowed Walmart to increase the amount of fresh goods purchased from local farmers, and delivered a clear business benefit, the program reached only a small number of farmers and had limited social impact.

That evolved into the second phase, with Walmart and USAID engaging at a corporate level through a GDA, and co-investing in project design and implementation. While this model achieved greater scale than the first, it, too, produced relatively limited business and social outcomes. This was due, in part, to the organizations having different priorities. While USAID’s Feed the Future program focused on low-income populations in remote rural areas, which typically grew staple crops, Walmart required fresh fruit and vegetables for its stores.

The third phase began with the organizations signing a global “memorandum of understanding” and agreeing to join projects that had a large impact on women and which were already underway. The goal was to speed uptake and reduce the cost per farmer trained. Walmart, for example, helped fund one project extension to train 40,000 women farmers, and another to train 50,000 farmers in bio-intensive gardening. Lots of farmers were trained, but there was relatively limited business benefit, since these projects were focused on impacting women farmers and not necessarily aligned with geographies or value chains that were of interest to Walmart.

The case ends with a review of the changing landscape: Walmart has refocused on achieving both business and social value, and the development world has acknowledged that the private sector has a large role to play in solving global challenges. Going forward, readers are left to consider what Walmart might do to ensure that it is set up for success in a changing world; that it has not only the right partners, but the right kinds of partnerships.

Keck says that, without question, USAID is an example of the right kind of partnership for Walmart, offering an alternative worldview and a different perspective on complex issues. “We like working with USAID,” she said. “Because of their public obligation, using taxpayers’ money, they are very attuned to the quality of work they are doing so that gives us an opportunity to work with a very strong partner. … There are clearly areas where we can collaborate in the future.”

Asked how taxpayers have benefited from USAID's partnership with Walmart, Schneider said, "Public-private partnerships – in addition to offering very real benefit in terms of private sector knowledge, supply chains, market access and networks – can help taxpayer money go further. … Our partnerships in the agriculture sector have also leveraged Walmart’s local supply chains and global buying power. American taxpayers benefit from those improved supply chains, better products and knowledge that the goods they buy contribute to the livelihoods of the people and communities they are sourced from."

Schneider said the success of USAID's partnerships is ultimately a matter of development impact, and that "manifests itself in a number of ways depending on the nature of the partnership. … We find that our most successful partnerships with the private sector are those that clearly align core business interests with development objectives, tap into companies’ core capabilities and employ models that are cost-effective, scalable and self-sustaining.

"Partnerships at USAID are more than just the dollars leveraged. They provide access to expertise, technologies and innovations found in the private sector, which when combined with USAID’s technical expertise and in-country knowledge, often result in high-impact development projects that can be sustained long after public funding ends."