David Griswold remembers sitting in a room in Guatemala back in the mid-1990s, tasting coffee offered up by an exporter. As he considered the product and chatted about price, one key person was absent from the negotiations: the farmer who grew the beans.

“The farmer would literally be standing outside the door, no ability to taste his own coffee, not really understanding what the cupping process was, watching me slurp and spit, just hoping to see a thumbs up,” Griswold recalls. “And it seemed so asymmetric that I should be able to have this skill and they can’t.”

The drive toward transparency and “empathy” – a term seldom uttered in the commodities trade – has been Griswold’s mission ever since. As founder and president of Sustainable Harvest, a seller of fair trade coffee to the likes of Green Mountain and Whole Foods, Griswold not only has opened the room up to farmers, but just about everyone else involved in the $20 billion a year coffee market. This mission to inject more symmetry into the business has served Sustainable Harvest well. In 2013, the company closed $70 million in global sales.

The journey toward Sustainable Coffee began when Griswold joined a handful of early employees of Ashoka, working under founder Bill Drayton. In his two years there, he went from unpaid intern to Ashoka’s first director of communications. Writing stories about the Ashoka fellows and their impact, Griswold was soon eager to test out his own chops as a “public service entrepreneur” – the moniker that proceeded “social entrepreneur” back then. He signed on as a volunteer to help a Mexico-based Ashoka Fellow, traveled to southern Mexico and got his first taste of the coffee trade. He found it somewhat bitter, especially when he saw the low margins for coffee farmers compared with the top of the chain at the retail level.

Operating out of a single office in San Francisco, he founded Aztec Harvests. And because he wanted to go “beyond fair trade,” which was just emerging at the time, he made the Mexican coffee farmers he worked with 100 percent owners in the enterprise. 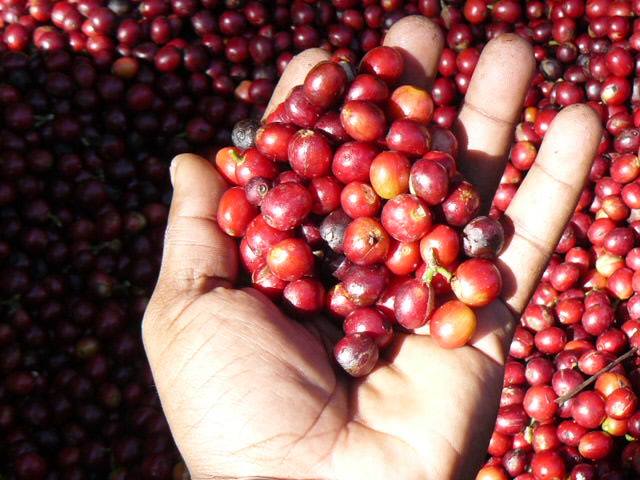 “I started importing beans and I made all the mistakes you could possibly make in terms of not knowing anything about how a commodity business works,” Griswold says.

Several mistakes came out of inexperience, but not all. Griswold entered a world of distrust and secrecy, where no one in the supply chain really knew what his competitors or suppliers were clearing. The lack of information strained relationships, both professional and personal.

“I thought, ‘This is crazy,’” Griswold says. “The idea that everyone would keep their margins secret seemed so inefficient to me. People were guessing what their margins were and they were usually guessing high.”

But some things did work out. Ben & Jerry’s used his coffee for an ice cream flavor. Through his Ashoka connections he was able to sell to United Airlines, which served his coffee on U.S.-Mexico flights. Still, selling just Mexican coffee put him at a disadvantage. So he exited Aztec and started up Sustainable Harvest, which spawned a “two-year walk in the woods to try to find someone willing to fund a high-risk, high-capital, low-margin business,” he recalls with a smile. Getting started with a small business loan, Griswold moved from the Bay Area to Portland in 2000 to lower his costs. At the time, he sourced from several companies in Latin America and his sales were about $3 million, which might sound like a lot for a young business. But with gross margins around 10 percent, well, you can do the math. For the first several years Griswold worked alone, managing everything from answering customer calls to importing logistics, marketing materials and finance.

The issue of transparency and general mistrust continued to bother him. So when some suppliers in Mexico considered making a break from the coffee business, Griswold saw an opportunity to bridge the trust gap. He convinced them to stay and to unite with Sustainable Harvest, creating a training office for growers for improving yields and to understand what their product tastes like when it reaches the cup. This created the first “Let’s Talk” gathering, a trade convention of sorts for all of his supply chain partners that has continued annually for the last decade. It’s a trend Griswold coined more than a decade ago as “Relationship Coffee.”

“Suddenly something clicked there,” he says. “Our buyers wanted to know more about where they were getting their coffee, they wanted to be doing the deals. And the farmers needed more training just to get their small and growing businesses up to speed just to be able to handle the demands of these buyers.”

Coffee farmers who work with Sustainable Harvest are trained in tasting, and specifically, tasting their own coffee. They’re also provided insight into how the entire supply chain functions, the cut that roasters take, the cut importers take, the prices involved in shipping, packaging and retailer mark-ups, and ultimately, to the consumer’s cup. They’re also provided high-tech tools, like iPads and apps, instead of aging computers from the U.S. office. It’s all part of the equalization Griswold tries to achieve. 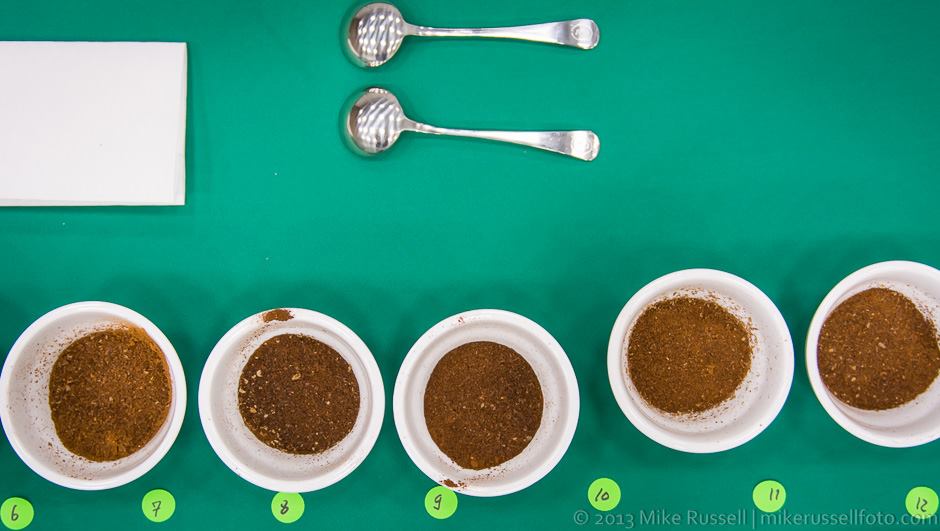 Through it all, Griswold says he has tried to make Sustainable Harvest as transparent as he could, even as the company has spread to hundreds of farming co-ops and added big-name retailers as customers. He’s been accused of over-sharing, he admits.

“I think people are taken aback when you start being really open about numbers,” he says. “You’re getting into delicate areas of conversation. If a farmer makes this much, how much should a retailer make? And those are really deep issues we find transparency brings forward, and we need to face them globally in many areas of commerce.”

(Above: Testing different coffees at the “Let’s Talk Conference” in 2013. Image ©Mike Russell)

Ninety percent of the company’s coffee is certified fair trade organic. And Griswold says freely that his coffee is far and away the highest priced in the industry. The base price paid to farmers is $1.90 (per pound) in a market that at the time of this printing averages transactions of $1.20 a pound. The consistency in quality and delivery are the main reasons for the elevated pricing, he says. But this openness isn’t just about doing good; it’s about improving the product and ultimately the profits, Griswold says.

“It creates a much more consistent supply chain because people are shipping what you want them to ship and they know what they’re shipping,” he says. “It’s not just this roulette game. Most farmers look at coffee for physical defects but not for taste. … Now it’s changing.”

Griswold says the company employs 16 Q-graders (or certified professional tasters) and has invested in training 200 of its suppliers to become certified Q-grader tasters as well. Over time, the firm has tracked the quality scores of the coffee farmers as they steadily improve, along with roasters willing to pay more for high-quality coffees, in a proprietary database system that can measure just about everything important to the business – even the carbon footprint of its shipments.

The coffee industry is facing perilous times. Climate change has touched off la roya (or “coffee rust”), a mold affecting crops because of elevated temperatures in certain coffee-producing regions. Prices have fallen significantly, in large part due to a surge in supply from Brazil and Vietnam. Those suffering the most from low prices are the high-quality specialty producers in Central and South America – Sustainable Harvest’s main suppliers. The trend is prompting farmers to sell their land to much larger coffee suppliers or to golf course developers in coffee stalwarts like Antigua and Costa Rica. According to Griswold, just two decades ago El Salvador produced 128 million pounds of coffee; today it’s down to less than 20 million pounds. 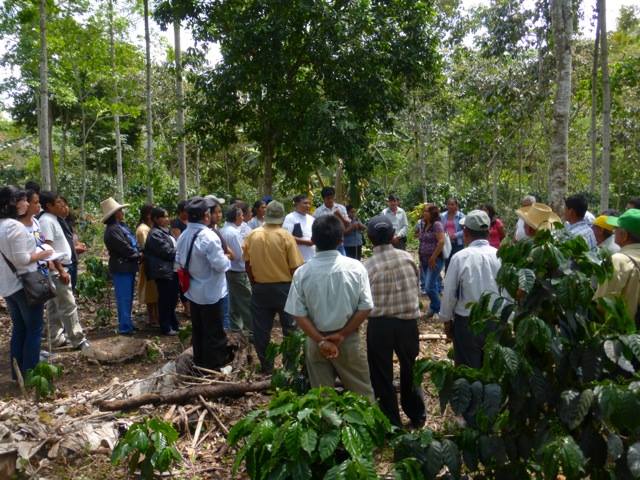 “So who’s left to farm coffee? It can’t just be the landed gentry and the very poor,” Griswold says.

Today’s tough coffee market reminded Griswold of another experience. Early on as an importer, he bought lots of shade-grown coffee, believing it would be more popular than organic or even the still-nascent fair trade varieties. Then the coffee commodity price fell by half and he owed more than $100,000 to his financiers. It took him several years to pay off his debt, and from that taught him an important lesson: to work collaboratively with his suppliers and customers.

(Above: In Peru, a discussion on the essential nutrients coffee plants need to thrive and how fertilizers can help. Image: Sustainable Harvest.)

“It was the worst feeling of my life, and probably the best lesson I could have,” he says. “If I only had success, I don’t think I would understand what it feels like to let your family down, to feel like you don’t know where to turn. So when farmers face coffee market prices that are below costs of production, I can empathize in a very deep way, and explain my work is to try to help change that. ”

That experience has inspired Griswold and his team to continue investing in farmer training and hosting “Let’s Talk Coffee” events, which he says help smallholder farmers know: “You don’t have to walk alone; we’re going to figure this out together.”