NexThought Monday – Time Out: Three Reasons why too many Philadelphia Eagles fans are bad for global development

As a New York Giants fan, some of my fondest football memories have come from watching our rivals, the Philadelphia Eagles, lose meaningful games. As (mis)fortune would have it, the Eagles lost three straight National Football Conference (NFC) Championship games between 2002 and 2004, and then lost the Super Bowl in 2005. To a Giants fan, these outcomes meant celebration; but to people living in developing countries, they meant yet another “Eagles Are Champions” T-shirt.

Let me explain. Every season of the National Football League (NFL), sporting goods manufacturers pre-print T-shirts, sweatshirts and hats for both teams competing in the Super Bowl and the preceding conference championship games, so they can sell the merchandise to fans immediately after the game ends. But, since one team must inevitably lose, this renders half the stock of “winning” gear useless, leaving no market for the items that bear false history.

Enter World Vision, the Christian charity organization whose mission is to help families and communities “reach their full potential by tackling the causes of poverty and injustice.” Recognizing the chance to turn first-world waste into third-world benefit, World Vision and the NFL joined forces to distribute the misprinted clothing to communities throughout the developing world. Since 1994, the NFL has donated hundreds of thousands of clothing items valued at tens of millions of dollars, helping to clothe countless low-income communities with brand new sports gear.

Now you might think this is all fine and dandy – a match made in heaven perhaps. Not so fast. Despite appearing like admirable corporate social responsibility on the surface, this program is thought by some to be questionable foreign aid at best, and poor – if not detrimental – economic development at worst. Here are three reasons why:

1. Giving away free clothing dramatically undercuts the local business community. How can a small clothing manufacturer or retailer compete with free? When many local businesspeople earn only a few hundred dollars of income a year, this annual influx of otherwise worthless goods dilutes their market and drives down prices. And, as highlighted in TIME by James Skikwati, director of the Inter Region Economic Network, it “destroy[s] these villages’ ability to be industrious and produce cotton products.”

2. Tax breaks allow the companies involved to mitigate their losses from misprinting the clothing. Sporting goods manufacturers and retailers like Reebok, Sports Authority and Dick’s are able to write off each item of clothing donated as a tax deduction, with T-shirts valued at $20 despite being worth close to nothing in the real market. So companies can now print twice as much celebratory clothing before championship games, knowing that the “losing” half of stock will get shipped to developing countries and that their bottom line won’t be affected.

3. These tens of thousands of T-shirts, sweatshirts and hats are not necessarily life-saving or even life-changing interventions. As the TIME article mentions, people in the developing world often have clothing, and instead need more pressing interventions like food, education and medicine. In fact, if the NFL allocated the estimated $2 million in merchandise each year to other interventions that World Vision offers, they could (according to gift prices on World Vision’s donation page) build or renovate 51 health clinics; equip 1,852 villages with bed nets to prevent malaria; provide 25,974 motherhood training kits and tools to new moms; offer 66,666 caregiver kits to health workers; or deliver 731,707 vaccines to prevent against diseases like measles, hepatitis, tetanus, whooping cough and polio. 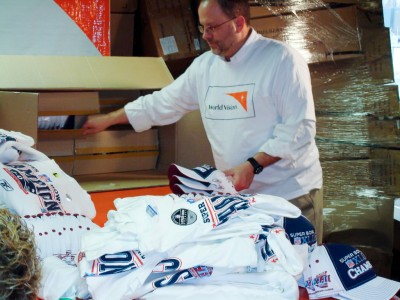 All of these critiques call into question the need for and effectiveness of this donation program – and even the intentions behind it. If World Vision aspires to help communities “reach their full potential,” shouldn’t they aim to support local economic growth rather than undercut it? And shouldn’t they provide interventions that are needed and not just convenient for Western corporations? If the companies involved – including the NFL – continue to claim that they are doing good, shouldn’t we take a closer look at the economic and social impact of the program? And shouldn’t we hold them accountable for potentially reckless and ostensibly greedy manufacturing practices?

In an ever-changing world of global development, we’re seeing multinational companies evolve their approach to corporate social responsibility so that it’s smarter, more efficient and sustainable – both for them and for the local communities they seek to improve. But this clothing donation program appears to more accurately fall under corporate social irresponsibility.

In fairness to World Vision, a spokeswoman responded to some of these critiques, noting that the organization doesn’t just “dump” clothing without first analyzing the market. She maintains that “the quantity of product [they] distribute is too small to have any measurable impact on local economies,” and that the money families save by receiving free clothing enables them to “use the precious cash they do have to develop their small businesses or pay for their children’s medical care.”

So the debate rolls on. Good Intentions Are Not Enough provides a great summary of this controversy, yet the practice appears to continue unabated as we gear up for another NFL season. We Giants fans might derive a sense of schadenfreude from the thousands of people now believing the Eagles were champions from 2002 to 2005, but maybe the NFL can do better, and maybe the global development community should take a closer look at this scheme to determine if it is as mislabeled as the shirts it donates.

Adam Lewis is an associate at Rabin Martin, a global health strategy firm.