NextThought Monday: Market, Government and Finding Synergies Between the Two

At a recent Echoing Green conference outside of Washington, D.C. I heard a mind altering speech by Tom Sheridan, a leading advocate known for his work shifting policy on issues from “AIDS in Africa to human trafficking in Asia.” Tom was not shy about making a bold and compelling statement: Every social entrepreneur not only can, but must advocate for their solution with governmental and other large institutions who are capable of shifting policy. It is our obligation to advocate.

Educate! develops the next generation of leaders and entrepreneurs in Uganda where we provide world-class social entrepreneurship education and long-term mentorship to help youth start enterprises that solve poverty, disease, violence, disempowerment, and environmental degradation. With 50 percent of the population in Uganda under the age of 15, there is a critical and urgent need to spread our solution to reach, most literally, an entire generation of youth. As a result we keep our eyes peeled for any opportunity to grasp that idolized holy grail of social entrepreneurship: a sustainable, market-based approach to scale. Sheridan’s speech helped us see another approach.

Especially for many of the readers of this blog, it’s easy to let advocacy – the process of scaling a solution through policy change – slip into the distance and focus on the market-based approach to scale. However, by doing so aren’t we leaving behind the other arguably more powerful and proven approach to scale and sustainability? 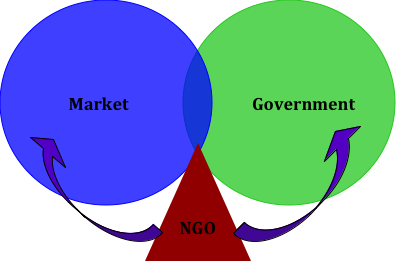 The NGO is the wedge, driving forward its solution. Perhaps it’s a solution that doesn’t yet have a market to propagate it, either because that market doesn’t exist or because the necessary information hasn’t yet reached the consumers. Or perhaps that solution is one which the government has not yet grasped and adopted. As seen above, each arrow represents one path an NGO can take to help its solution fly on its own, become independent, and help make the organization that incubated the solution someday obsolete.

This post argues that social change has swung towards the market-based approach to scale and largely lost sight of the other approach which involves those less vogue, even taboo, words: institutions, lobbying, and policy.

Yet, if we look back just 50 years to the legendary 1960’s in the U.S. and many other parts of the world it could be argued that the social change pendulum was far on the government side of the above diagram, and had largely ignored the market-based path. Agents of social change were synonymous with activists. Protests in the street, public opinion, and the power of the people were the social change tools of the time.

Then a couple decades later the 1980’s saw the beginning of the social entrepreneurship movement and the pendulum began to swing to the market side. Now the social change agents of our time are MBA grads who apply Harvard Business Review articles to the practice of building effective enterprises aimed at optimizing solutions to social and environmental problems. The tools of choice are market research, product design, and financial models. 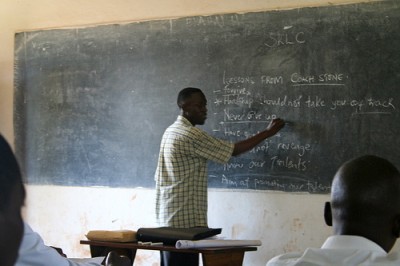 (Above: A mentor leads a classroom discussion).

Of course there are exceptions – I know many exceptional advocates working today and I’m sure there were “social enterprises” back in the 60’s – even if that term was not yet popularized.

Isn’t it time to find the balance, or better yet the synergy between the market and government approaches to scale?

Whether by chance, intelligent design, or some of both, Educate! seems to have stumbled into that space. Through partnership with the National Curriculum Development Center of the Government of Uganda and UN International Labor Organization, Educate!’s social entrepreneurship curriculum has been incorporated into the national education system. Like the flick of a switch, there will now be well over 45,000 youth across the country learning about social entrepreneurship and then practice creating an enterprise or initiative to solve a problem in the community. It was just a year and half ago that we were working with 415 students and cold-calling (or should I say cold-knocking on the door of) key representatives in the government responsible for the education system. From 415 to 45,000 in what has seemed like the blink of an eye. Does the educational market have that power, or speed? What is more, our solution has now been adopted by the government – we’re obsolete so to speak and can move onto the next evolution…

Which brings me to the final point – perhaps the holy grail of social change is not either of the paths above, but rather the synergy between the two. Let’s face it, both the market and government approaches have their weaknesses: the market, as beautiful as its feedback loops are, has trouble reaching the poorest of the poor and the government lacks those very feedback cycles which keep solutions from stagnating. But what if we can use the strengths of both?

Now that the government has adopted our curriculum, a world of possibilities has opened up to scale out the other components of Educate!’s program that go along with the curriculum (specifically mentorship, teacher training, and practical experience starting enterprises) via market based approaches. The government partnership has given Educate! a presence in nearly every school in the country and big credibility (in an education system where the government-created curriculum and exams drive all incentives). In other words, it’s nice lubrication of distribution channels and a major boost for brand recognition. None of the market based approaches to scale we’re currently exploring (which I won’t bore you with here, but would love to talk more about) wouldn’t hold the same promise if it wasn’t for the partnership with the government. It is those same market based approaches which will, appropriately, help keep our curriculum from stagnating now that it’s adopted by the government. Thus, the powerful synergy between the two approaches.

Some closing questions to consider: 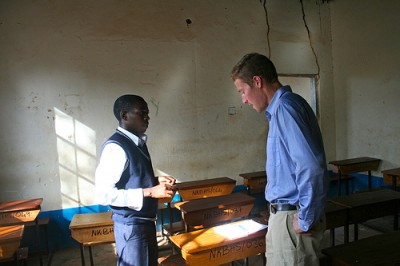