Notes from the Vision Summit in Germany

“People who have a vision should go see a doctor,” former German Chancellor Helmut Schmidt famously said. Around 1,000 of his fellow countrymen and several social visionaries from abroad duly ignored the pragmatist leader’s recommendation at the fourth Vision Summit earlier this month.

The Genisis Insitute gathered the German social entrepreneurship community in the city of Potsdam, just outside of Berlin and home to the d.school (a sister-institution of the d.school at the University of Stanford) on April 8 and 9. Organized around six tracks – from social entrepreneurship basics up to issues regarding finance and scale up of social ventures – the conference lived up to its promise to provide inspiration and room for connecting to like-minded individuals.

The Social Lab Cologne presented a promising example of joining forces for social impact. The Lab brings together educational entrepreneurs from throughout Germany in the city of Cologne, Germany. More than ten participating entrepreneurs receive business model support and enter a close collaboration with each other. This approach enables them to identify and make use of synergies while complementing their individual initiatives to develop a comprehensive approach more impactful than the sum of its parts. The idea is to state an example of how the entire education chain may be improved – from early childhood, through school until job entry.

SecondMuse, an international consultancy promoting the development of innovation through collaborative methods, ran a session focused on joining forces for social impact more broadly. They shared their insights from two of their initiatives, namely ‘Random Hacks of Kindness’ and ‘LAUNCH’. The former is a partnership of the World Bank, Google, Yahoo!, and Microsoft bringing together software developers to design solutions that address challenges in natural disaster risk and response management. ‘LAUNCH’, an initiative with NASA, USAID, the State Department, and Nike, works on identifying, showcasing and supporting innovation to tackle pressing global issues such as in the water and health sectors.

In a session on social franchising, three Organizations run by Ashoka and Schwab Fellows introduced their approaches to scaling up, amongst them Dialogue Social Enterprise (DSE) with ‘Dialogue in the Dark’ where visually impaired guides lead sighted visitors through pitch dark and specially constructed exhibitions. Mirjam Schöning of the Schwab Foundation commented that the 10 percent of the 200 Schwab Social Entrepreneurs employing a social franchising model tend to grow faster (average growth of 17 percent) than those expanding through building subsidiaries (average growth of 8 percent). Andreas Heinecke of DSE explained that his organization uses a “friendchise” model – franchising built on trust and friendship. This approach has allowed DSE to replicate its exhibitions and workshops to more than 30 countries, however, seems to be approaching its growth limit. As a consequence, Andreas posed the question whether a reverse shift from .com to .org (i.e. instead franchising apply an open source approach) might enable growth beyond those limits.

Several speakers from abroad enriched the discussions. Amongst them were Dr. Perumalsamy Namperumalsamy, Chairman Emiritus of Aravind Eye Care, and Bibi Russel, founder of Fashion for Development. At the conference both received the Vision Award 2011. 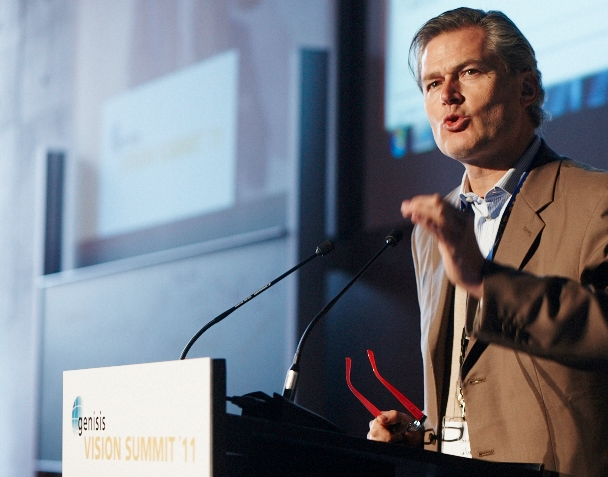 Quite breathtaking not only regarding the speed of flipping through the slides but also in terms of ideas and visions presented was the Keynote speech of Gunter Pauli. Serial entrepreneur and member of the Club of Rome he presented his vision of a Blue Economy – an economy beyond the “Green Economy” and built to be sustainable not only for those who can afford it. He argues that there are 100 sustainable innovations (e.g. see this list of 51 cases) that have the potential to create 100 million jobs over the next ten years. Pauli explained that learning from and working with nature combined with system thinking helps to develop creative solutions to pressing challenges such as poverty and climate change.

In terms of Vision Summit attendees, it was very encouraging to not only meet the usual suspects from the social entrepreneurship space. Next to well-established entrepreneurs, researchers and funders you would meet people who found a flyer about the conference in a train or elsewhere and decided to attend out of curiosity and even dragged along their friends who hadn’t heard about social business before; this is also despite this year’s summit being the first without the attendance of crowd puller Mohammed Yunus.

All in all, this fourth Vision Summit provided an inspiring space, showcasing current initiatives and encouraging collaboration: a good insight into the German social entrepreneurship and social business arena!