Part of the Problem – or Part of the Solution?: EMERGE conference challenges financial service providers to raise their game in serving low-income Americans

It isn’t easy to talk about poverty in the United States.

It’s not that poverty isn’t widespread – on the contrary, the poor population hovers around 46.5 million, among the highest totals ever recorded. And recent research indicates that a majority of Americans between the ages of 25 and 60 will spend at least one year below or near the official poverty line.

Yet poverty doesn’t fit comfortably into our national mythology. We’re accustomed to seeing ourselves as the world’s lone superpower, an exceptional nation that has gotten ahead through hard work and the power of free enterprise. We’ve long viewed our success as the envy of the world – inextricably linked to an economic system that we have developed and defended for centuries. So we tend to think of poverty as the problem of other countries that haven’t managed to emulate our proven model – or of individuals and communities that haven’t been willing to put in the work.

But as the country struggles with the lingering fallout of an economic crisis caused by flaws in the free enterprise system itself, public perceptions around poverty are changing. And perhaps surprisingly, so is the industry whose excesses sparked the 2008 crash in the first place, as financial services providers wake up to the opportunities in serving America’s growing low- and middle-income market.

That’s why NextBillion Financial Innovation is launching a new series – and a new focus area – around domestic innovations. The series will feature regular posts throughout the summer, exploring how financial services providers are serving low-income communities in the U.S. This content will be aggregated in the new Domestic Financial Innovations focus area page, along with future (and a few past) posts that explore how these providers are adjusting to shifting markets, technologies and regulations in their efforts to bring financial access to America’s underserved.

The financial industry’s movement toward low-income markets – and the contradictions it brings – were on full display last week at EMERGE: The Forum on Consumer Financial Services Innovation. Presented by the Center for Financial Services Innovation (a NextBillion Content Partner) and American Banker, the event brought together industry heavyweights with a growing interest in serving lower-income clients like American Express, JPMorgan Chase, Visa and Citi, with innovative companies, nonprofits and researchers focused specifically on doing so.

Some participants at the event emphasized the fact that banks, perceived (rightly or wrongly) as having high costs, restrictive policies and too few branches in poor neighborhoods, are not the financial institutions of choice for a growing number of low-income Americans. The shift away from banks as the sole service providers for the underserved was reflected in the conference’s new name – it had previously been called the Underbanked Financial Services Forum before this year’s event declared that the term “underbanked” has “outlived its usefulness.”

That theme permeated the conference from the start. The event began with a unique activity that sent small groups of participants to local neighborhoods in Los Angeles, to perform the real financial transactions that are common outside of the traditional banking system: check cashing, obtaining and reloading prepaid cards, buying a money order to pay a bill, and looking into payday loans and even pawnshops to acquire cash. Participants reported surprise at the cost and inconvenience of these transactions, but also at the inescapable fact that they worked – and often served the needs of low- and even middle-income people better than traditional branch banking.

A number of panelists emphasized this realization. As Lisa Servon, professor of urban policy at The New School put it, “If banks are so much better for low-income people, why aren’t they using them?” Services like check cashers and payday lenders are often criticized for their high costs, she said, but they can actually be the cheapest option available when you consider the steep overdraft and account management fees common at banks. “Banks are too expensive for people living on the edge,” she said, “and there are more of us living on the edge than ever before.”

Factor in inconveniences like a lack of physical proximity, inconvenient hours and lengthy, incomprehensible policies and forms – she mentioned a 110-page disclosure agreement that was “twice the length of Romeo and Juliet” – and it’s no surprise that many low-income people avoid banks. Instead of presuming to know what’s best for them, Servon said, financial services providers should look at what these customers are already doing to identify their needs and preferences.

One of those preferences involves customer service, she said: Check cashers tend to treat their customers like individuals, while banks seem to view them as account numbers. She spoke of special lines at banks designated for “premier customers,” and offering better treatment. Why isn’t there a special line for the financially underserved, who actually need more information? Or why don’t we treat both sides the same? Servon asked. She directed a final pointed question at the audience: Has anyone ever rushed home to tell their friends about the wonderful treatment they just received at a bank branch? A number of people responded with a laugh. 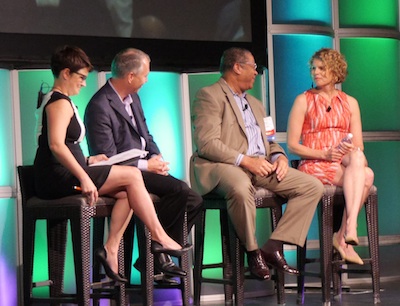 All the complaints about banks – and Servon was not the only panelist to express them – made for some lively debate. Servon sat on a panel with Bruce Murphy, head of corporate responsibility at Key Bank. When his turn came to speak, he weighed his words carefully. “I think the financial services industry, banks in particular, has earned the criticism it’s getting,” he said. “We were making decisions that were fundamentally antithetical to the purpose of banking.”

As examples, he mentioned the banks whose loans and mortgages to those who were unlikely to repay them helped spark the 2008 crisis, and the practice of giving free checking accounts to clients with a high propensity for overdrafts – bringing high fees that benefited banks at clients’ expense. “You’re going to see significant shifts in the way we offer services,” he insisted. “But the reality is, when people want a mortgage, where do they go? When they want longer-term financial strategy, where do they go?” The answer, he said, was clear: Banks will continue to serve roles that payday lenders, prepaid cards and check cashers cannot.

He also injected a note of realism into the discussion that many panelists seemed loathe to mention. “I think we have to be honest in the financial services industry that we cannot serve everyone, and we should not attempt to serve everyone,” he said. “We’re oftentimes thought of as ‘the answer’ – and that’s fundamentally not the case. There are clients that we’re not able to serve.”

For years, Key Bank has been trying to build products, services and transparency to serve the underserved, he said, and by most accounts they’ve made significant strides. “But the reality is that we’re a for-profit institution, and I will never apologize for that. So my view is that we need to balance mission and margin. And we can invest profits back into our community in a way that brings them into the system, so they can afford a mortgage, pay for college and do things that transactional institutions don’t provide.”

Servon was quick to reassure Murphy and the audience that she didn’t want to blame banks for everything that has gone wrong in the American economy in recent years (and recent decades). She mentioned what she views as the real reasons so many people are struggling: stagnant wages, a weak job market and the retraction of the social safety net over the past 50 years. “Banks can’t solve this problem – nobody in this room can – alone,” she said, to audience applause.

It was both exciting and discouraging to listen to the frank conversations of so many intelligent people dedicated to making financial services work for low- and middle-income people. Among all the innovations discussed (and we’ll have more coverage of those in an upcoming post), it was tempting to imagine America’s financial services industry redeeming itself for the 2008 crash by cracking the code to useful, affordable and profitable services that ease the financial pain of the millions who continue to struggle in our economy’s halfhearted recovery.

Yet among all the talk of “win-win” scenarios, the promise of the burgeoning low-income market and the growing awareness of its needs, it was hard not to reflect on some tough questions. Many panelists and attendees seemed to view the cost-cutting potential of technological advances as a trump card that will allow providers to deliver both attractive profits and affordable services. But if that doesn’t prove to be possible, will industry players withdraw from the low-income market, or turn to approaches that prioritize margin over mission?

CFSI President and CEO Jennifer Tescher acknowledged the scope of the challenge in her statement at the end of the event. Despite all the new tools, insights and technology available, she said, it’s not easy to wedge new ideas into old business models. And when it comes to making finance work for low-income people, her closing remarks were punctuated with both optimism and a hard truth: “This is frickin’ hard,” she said, “but the only way we’ll get there is by leveraging the power of this incredible group of innovators. And it starts right here, right now.”