Peddling Poor Products to the Poor: What’s Our Responsibility?

In a recent article, The Guardian documented troubling observations from Khayelitsha, a township outside Cape Town of approximately one million mostly low-income residents. The ubiquitous shack shops are “adorned with Coca-Cola branding.” A ShopRite supermarket sells tomatoes, but a kilo “cost more than a 2-litre bottle of cola.” At the store’s entrance, leaflets promote discounted alcohol with free mobile phone deals.

“The aisle ends,” the reporter notes, “had special offers for Nestlé’s coffee-style caffeine drink Ricoffy listing dextrin (a starch sugar) and dextrose (a form of sugar) as its two main ingredients.” Somberly ironic, “the checkout was stacked with sweets alongside ’funeral plan pay-as-you-go’ starter packs.” To marketers, these are familiar tactics – out-of-home advertising and in-store promotions are advertising staples. And as evidenced by the West’s soaring rates of non-communicable diseases (NCDs) like diabetes and heart disease, we know they work.

They’re also now working in emerging markets. Diabetes prevalence in South Africa will climb approximately 58 percent between 2000 and 2030, driven largely by diets heavy in processed foods and beverages. While popularly thought to be the exclusive burden of rich countries, preventable NCDs are reaching endemic proportions across the developing world. Currently, more than 70 percent of those with diabetes live in low- and middle-income countries. The mortality rate from NCDs among women in Africa is now twice as high as the rate in high-income countries. And as the WHO reports, NCDs are now the biggest worldwide killers, rapidly surpassing infectious diseases like HIV, malaria and tuberculosis.

These harrowing figures should give the BoP business community pause. Publications – including this one – are flush with stories of multinational corporations bringing their marketing acumen and resources to bear in low-income markets to better serve the poor. Nestlé, for example, skillfully markets NIDO Essentia at the BoP, a fortified milk specially developed to address micronutrient deficiencies in Africa. The model is a paragon of BoP marketing: sold in “affordably packaged units” (i.e. sachets), the company “partners with small entrepreneurs who sell NIDO Essentia door to door or through small retail shops based in low-income communities.” To date, the brand claims to have reached 80 percent penetration across its rural and urban markets. 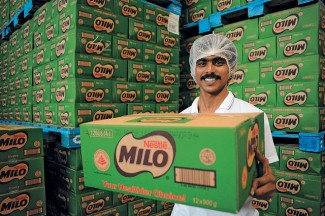 But Nestlé also markets Milo, a brand that encompasses products from a chocolate milk energy drink (targeted at African primary school children) to chocolate cereal (with a whopping 34 grams of sugar per serving). And as we know now, added sugars are causally related to long-term weight gain, type 2 diabetes and cardiovascular risk. Lately, the cereal has come under attack in developed markets for its large discrepancy “between nutritional value and promotional claims.” With one hand, companies like Nestlé are contributing to development; with the other, they’re taking away. (Above left: Nestlé’s Milo energy drink, which includes the “Healthier Choice symbol.” Image Credit: Nestlé’s Flickr Photostream).

In 2010, Nestlé’s Food and Beverage products in emerging markets experienced market share growth over three times that of developed regions like Europe. The Milo brand in particular clocked in double-digit growth in Asia, Oceania and Africa.

For its part, Nestlé views itself as “providing products that are healthier, safe and affordable for consumers wherever they are,” according to the Guardian article. The company also notes that “it gives consumers the information they need to make healthier choices, through the labelling and sponsored education programmes.” As for the processed foods? A company spokesperson explains:

“Often in emerging markets, processed food appeals to consumers because it is guaranteed to be safe. It can also help address deficiencies. We fortify many of what we call our popularly positioned products to help meet this need. Our range of products in South Africa and in Brazil is wider than that offered by many of our competitors. We are always looking for ways to improve both the taste and nutritional value of our products.”

As large businesses like Nestlé deepen their engagement in low-income markets, increasing sales of both beneficial and deleterious products to the poor, what is our responsibility? What is the culpability of the BoP business community as the endemic of NCDs develops into the largest health threat facing developing countries? As we devise and propagate inventive business models for tapping low-income markets, how do we ensure these models are used constructively? This September, the U.N. cited the “globalization of trade and marketing” as a key cause of the swelling burden of NCDs.

How do we make certain the power of marketing works toward development goals, not against them?