Investing in women is “smart economics,” according to a 2006 World Bank report and Natalia Oberti Noguera is doing just that. Through her new for-profit venture, she is diversifying the investor pool to create capital for women entrepreneurs. The Pipeline Fund Fellowship (PFF) trains women philanthropists to become angel investors through education and mentorship. At the end of the six-month program, the ten Pipeline Fund Fellows collectively choose which social enterprise will receive their $50,000 investment. (Entrepreneurs who are interested in applying for funding can submit applications by midnight EST on Thursday, May 12, 2011.)

After only a year, PFF’s personable, 27-year old founder has attracted media coverage from Bloomberg, Dowser, Forbes, Mashable, TechCrunch and The New York Times. She has also announced plans to launch the program in San Francisco and L.A.

On April 30, I learned about Natalia’s latest expansion plan while attending the 2011 PFF Conference in New York City, sponsored by Goodwin Procter, 85 Broads and In Good Company. There I met Lina Montoya, who will be launching PFF Colombia later this year after she receives her MBA from the University of Maryland. Originally from Medellin Colombia, Lina worked in private banking and portfolio management at Bancolombia before receiving a Fulbright Scholarship to study in the U.S.

Lina believes that Colombia is ready for angel investors. “There is now greater security, political stability and private investment, and an improved regulatory environment. Entrepreneurship and job creation are major goals of President Santos. And the venture capital community in Colombia is growing. It will grow faster if VCs know they have angel investors supplying a pipeline of SMEs. As for potential angels, from my experience working with clients at Bancolombia, I know the money exists.”

Natalia elaborated on their expansion approach, “We plan to establish relationships with key stakeholders, universities, foundations, philanthropic institutions, and incubators, and assess how to best replicate PFF in a country with a different culture and language.”

According to Natalia, “PFF’s goals include creating capital for women-led for-profit triple bottom line startups. We’re not interested in simply financial returns.” PFF Colombia will also open up new sources of capital for Colombian entrepreneurs who are caught in the ’missing middle’ financing gap. As explained in a recent Fortune article, “SMEs provide over 30% of total employment and generate 16% of GDP in low-income countries. In middle-income countries, SMEs capture an even larger share at 57% and 39%, respectively. But they are often considered too risky for commercial investment and need much more investment capital than can be provided by microfinance.”

Motivating wealthy Colombians to form angel networks is one way to mitigate investment risk. Angel investors typically take an active role in coaching entrepreneurs, and local angels will have access to local resources and market knowledge, opening new opportunities and foreseeing risks. Enabling local financial intermediaries to gain experience investing in SMEs will also lead to the development of a more mature financial sector, according to NextBillion blogger Oscar Abello.

Building an Ecosystem of Women Investors

And then there are the benefits of creating more gender diversity among investors. In one of her tweets during the PFF Conference, Natalia announced, “More female investors = more networks that include female entrepreneurs & more #diversity in the deal-flow!” Statistics supports her Tweet. As Illuminate Ventures’ Cindy Padnos wrote, “Women now represent just over 15% of the angel investors, but just 5%-7% of the partner-level high-tech venture capital investors in the U.S. Firms with women investment partners are 70% more likely to lead an investment in a woman entrepreneur than those with only male partners.” 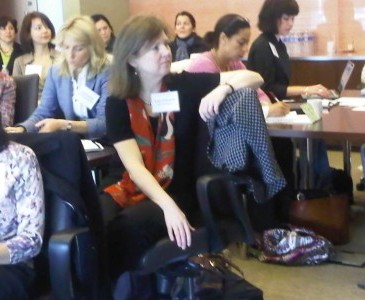 By recruiting investors from the pool of women philanthropists, Natalia will also ensure that PFF stays true to its mission. At the Conference, Monica Barrera, a 2011 Pipeline Fund Fellow from Chile, shared the story behind her socially-minded investment motives. Years ago, she moved to the U.S., fell in love, married and had two daughters. Shortly after their births, her husband died. “Out of necessity, my focus shifted from just my family, to my career so that I could support my daughters.” And so, for the past 16 years, Monica has owned her own dental practice in New York and has been a dedicated contributor to her community. “Now,” Monica said, “I want to empower other women to have economic independence, and I can do this as an angel investor.”