Editor’s Note: This article was originally posted on the Acumen Fund blog.

On April 9, Acumen Fund in India hosted an event to talk about energy access at the BoP. The event was structured as a conversation between Damian Miller, founder and CEO of Orb Energy and Jan Piercy, executive vice president of SBI, ShoreBank International, and a long-time Acumen Fund Global Advisor.

In India, almost 290 million people lack access to electricity, according to the 2011 survey by the International Energy Agency. While people in the developed world have access to light with the simple flip of a switch, people in rural India and other parts of the developing world struggle at the base of the energy access ladder. Improving energy access for the bottom of the pyramid is a steep challenge – as the poor ascend this ladder, they move from using traditional fuels like wood and kerosene towards universal access –what most of the developed world takes for granted.

This mobility up the ladder isn’t just a question of improving the quality of light – the repercussions are far greater than that. At the bottom of the ladder, kerosene and wood are not only ineffective and expensive (in terms of money, time and effort), but are also hazardous to health. Productivity lost and money spent on health treatment means lower incomes, trapping families at the bottom of the pyramid. Our goal at Acumen Fund is to help move individuals up this ladder, and achieve universal access by investing in innovative entrepreneurs who aim to solve this very problem. 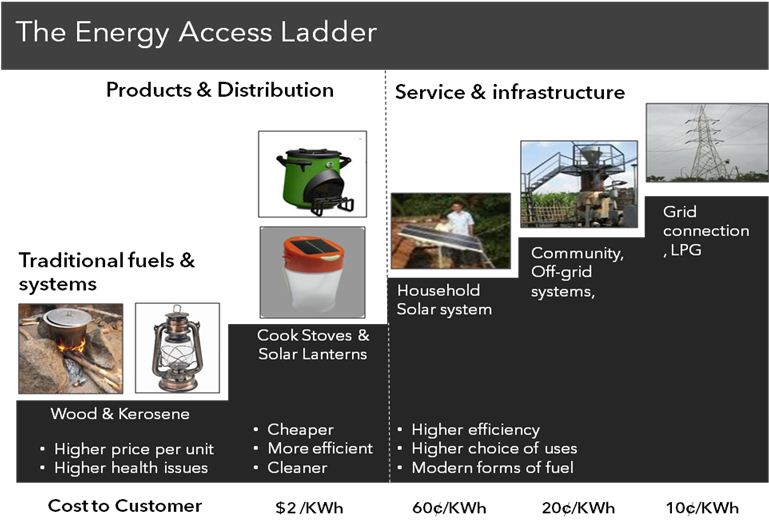 In 2011, Acumen Fund made an investment of $1.14M in Orb Energy to provide affordable solar energy systems for low-income households in India. With our investment, Orb is one step closer to making solar energy more affordable to these households with thelaunch of their newest product. The Solectric Plug and Play is a 5 watt solar panel with a Lithium battery, 2 LED lamps, a mobile charging point and a provision for grid charging – meaning it can be charged through the conventional power grid during intermittent times of electricity flow. The product is available at a retail price of Rs. 5,990, and Orb has successfully sold over 1,000 units in the one month since its launch.

When Acumen invested in Orb Energy, our hypothesis was that as BoP consumers move up the ladder to household energy solutions, they get more choice and flexibility as the economics of the business allows for customer service which is absent in most consumer durable sales to the BoP. Orb’s large portfolio of offerings, both Solar PV and Solar water heating, ranging from basic household systems to large commercial installations, provides the platform to support a retail network of over a 100 branches and a 600 strong field force.

Across brands, sectors and income segments, the most successful companies are those that provide customer service. In addition to the affordable price-point and sleek design of its products, what really differentiates Orb from its competitors is the service. On Acumen’s first diligence visit to Orb, it was apparent how important this concept is to the company. The Sales Engineer not only explained the entire process of installation, but noticing that the customer was nodding too readily, paused and started quizzing him to make sure he actually understood! No matter how innovative, affordable or attractive – most technologies fail to be adopted if consumers do not understand how to best make use of the product. The best way to increase adoption rates and fight competition is a happy customer.