Impact investing has grown rapidly since the term was coined in 2007. As wealth is transferred to a younger generation of investors with different priorities, greater emphasis is being placed on investments that generate positive social and environmental change, and as a result capital is slowly being directed towards creating impact. In 2018 alone, US $94.8 billion in capital was channeled towards impact, more than double the cumulative amount invested in the previous two years. The impact investing industry commanded US $502 billion in aggregate assets under management (AUM) by the end of 2018, over half of which was held by asset managers, just over a quarter held by development finance institutions (DFIs) and the rest controlled by banks, pension funds, insurance companies, foundations and family offices. 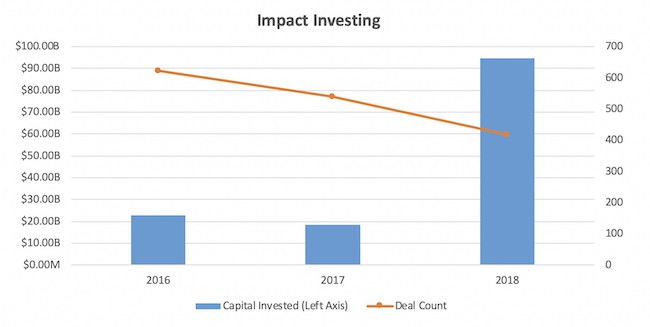 It does not come as a surprise that impact investing has been adopted by development-focused organisations like the International Finance Corporation and other DFIs. But it has increasingly also attracted the attention of more profit-driven institutions like banks and now, private equity firms – companies which have traditionally been seen as the pinnacle of capitalist enterprise seeking the highest possible returns on investment. Indeed, some of the largest and most well-established global private equity and investment management firms have embraced impact investing, marking an important milestone in the practice. These firms include Apollo Global Management, Kohlberg Kravis Roberts (KKR), The Blackstone Group and TPG Growth, which together hold over US $1 trillion in AUM.

New-York based private equity giants Apollo Global Management are set to raise US $1 billion for their first social impact fund, while KKR exceeded the billion-dollar mark it targeted in its debut Global Impact Fund. TPG Growth’s impact investing vehicle, the Rise Fund, amassed US $2 billion in AUM and will be aiming for US $3 billion for its next round, while the Blackstone Group hired a former Goldman Sachs Managing Director to head their new impact investing strategy. These commitments to seek more than just financial returns by some of the biggest firms in private equity and investment management will likely draw more of the same from their peers. This represents the crossing of a major hurdle necessary for impact investing to truly achieve scale.

However, the growth in money-backed demand for these types of investments begs the question of whether there is a sufficient supply of appropriate enterprises to absorb this capital. According to a 2019 survey carried out by the Global Impact Investing Network (GIIN), finding high-quality investment opportunities with a track record is a significant challenge for over a third of investors, and a moderate challenge for another 40%. At StratLink Advisory Group, a Nairobi-based financial advisory firm focusing on emerging and frontier markets, we have had considerable experience raising strategic debt and equity capital for firms, ranging from startups to mature enterprises, and are at the forefront of impact investment fundraising in East Africa.

Our experience echoes these results from the GIIN survey, in that demand for impact investments outweighs the supply of suitable firms able to absorb these capital injections. In Kenya, one of the factors contributing to this is a lack of knowledge about impact investing among locally established, natively owned firms. There are a multitude of companies that generate significant impact in the communities they serve that are investment ready but, due to a lack of awareness, never consider impact investing as a method of raising capital. Many of these firms operate outside of the capital city Nairobi where it is easier to go unnoticed by advisory companies like StratLink.

Another factor contributing to the mismatch between impact investing funds and the availability of investment-ready firms is a reluctance by local companies to give up equity. A family-owned Kenyan company in the western part of the country that StratLink engaged for a brief period of time serves as a case in point. The enterprise is a bakery which uses locally sourced inputs in its flour mill to produce high volumes of low-cost bread that is sold widely in that region, including in rural areas. The bakery was an ideal candidate for an impact investment, but was unwilling to sell an equity stake to an investor who was not a family member. Unfortunately, many Kenyan firms share this aversion to equity capital raising, which can make it challenging to source suitable firms for impact investments.

Avoiding the Risk of Impact Washing

The emergence of new and sizeable impact funds backed by private equity behemoths – together with a limited pipeline of actionable deals – will have opposing effects. On one hand, this will encourage existing and new firms to incorporate positive impact into their operations, in order to attract this expanding pool of impact investment capital. On the other hand, there is the much-discussed risk that this may generate perverse incentives, including “impact washing” by asset managers who deceitfully market investments as addressing environmental, social or governance issues to attract investors.

At the firm level, exaggerating impact to lure capital may also be an unwanted consequence – something StratLink experienced firsthand while engaging with a potential client. The firm provided short-term, business loans at high interest rates, significantly higher than the prevailing commercial bank lending rates at the time, to small and medium-sized enterprises which were facing challenges accessing credit from formal institutions. The lender was promoting the narrative that their loans support financial inclusion, which made the company attractive to impact investors. However, it could be argued that the lending rates they levied were exploitative and unsustainable from the borrower’s perspective.

In conclusion, the entry into impact investing of big players in the private equity space is an important step toward achieving scale for investments that seek social and environmental impact as well as financial return. However, the growth in the number of suitable and investment-ready firms in the market seems to be lagging behind the rapidly expanding pool of funds targeting investments that generate impact – for reasons that include a lack of awareness of the practice and an aversion towards equity capital raising. This imbalance risks generating unwanted outcomes such as impact washing. But, all things considered, the outlook for the industry is bright – as long as these potential hazards are carefully managed.

Julio De Souza is Director of SME and Impact Finance and Gianluca Storchi is a senior research analyst at StratLink.