Editor’s Note: This post was originally published on the Acumen Fund blog. All photos by Keya Madhvani.

Like most states in India, Andhra Pradesh (AP) has the population of a nation state – 83 million people (equivalent to the population of Egypt), but with an average GDP of USD 3,000 per annum (that of Nicaragua). Earlier this month, we traveled to Parvatipuram, a four-hour drive out of the sleepy coastal port of Vishakapatnam, to witness the outreach camps and meet communities impacted by AF investee, Pushpagiri Vitreo Retina Institute (PVRI), first hand.

Founded in 2004, PVRI’s combined business model allows them to treat fee-paying patients in addition to serving all low-income patients, the latter being either free of cost or through the Rajiv Aarogyasri government insurance plan in Andhra Pradesh (AP). PVRI is the only eye care facility in the state accredited to provide this care to what are commonly known as BPL or “Below Poverty Line’ card holders; anyone who earns under INR 3,000 per month (roughly USD 70). The program has allowed PVRI to conduct over 400 outreach camps to date, offering free screenings, medical prescriptions and referral services to rural patients who are difficult to reach due to their distance from PRVI’s central hospital facility in Secunderabad, Hyderabad’s sister city.

After a night in Parvatipuram, we arrive in the village of Maharaja Nagaram the next morning, just as the camp opens to an already full ’waiting room.’ A local temple had lent their space for the day and the various platforms of the temple act as different staging rooms: a registration and waiting room, initial screening room and doctor’s consultation room. Most of the patients are elderly and from the surrounding village. We were curious to learn how they found out about the camp and their expectations for how PVRI might help them. Currently running upwards of 10 camps a month in different villages, PVRI uses a combination of marketing techniques to get the word out about the clinics. Outreach for the Aarogyasri scheme camps is mandated by the government enabling promotional activities through local TV ads and the distribution of flyers.

At this particular camp, all the patients said they heard about the camps through a local auto driver who drove through the surrounding villages banging a tambourine, singing songs, and announcing the camps on a loudspeaker. The best marketers, however, are returning patients themselves. If patients are found to have cataracts or need retinal surgery, PVRI covers the transportation to Hyderabad and the cost of the surgery. You don’t get a better story than ’once I was blind and after travelling more than 625 km, I can now see’ to build interest, excitement and most importantly, trust. (Seth Godin would be proud).

Gourama is a middle aged woman who lived in the village and was experiencing increasing blindness in her right eye. She had long dark hair and a warm smile, but kept using her bright orange sari to wipe away the water that collected in the corner of her strained eye. She told us how her situation had been unchanged for close to three years and in spite of other camps coming through the area, this was the first time she’d had the courage to screen herself. As her blindness has gotten progressively worse, she became more desperate to find a solution. She would be happy to travel all the way to Hyderabad she said, if it meant restoring her vision.

PRVI’s target customers are daily agricultural labourers. In the high season (June to September) when there is work available they might earn as much as INR 150 for women and INR 200 for men (USD 3 or 4). The greater challenge comes in the dry, summer months of March, April and May when many villagers are forced to seek work under NREGA (Mahatma Gandhi National Rural Employment Guarantee Act), which ensures only their most basic needs being met. Families struggle with savings, prioritising day to day requirements, which means things like education for their children and medical expenses are the last on the list. Govind Hari, the CEO of PVRI, has learned that many of these villagers aren’t even aware of the care that is available to them. PVRI plays a key role in educating and empowering these individuals.

This disconnect and lack of access to services was particularly evident on crossing the Orissa border, less than 15 km away, in the heart of the tribal belt. Our presence was met with skepticism, which raised an important question for us. When individuals have never received quality care, convincing them to travel to a distant city for an operation is a sizeable challenge. This makes it all the more commendable that PVRI successfully keeps its facilities brimming with patients, primarily from urban and peri-urban areas, but also the three main tribal belts of Andhra Pradesh. 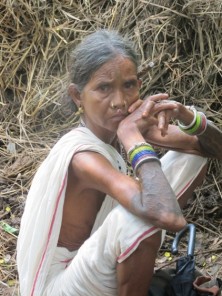 When we returned to the Maharaja Nagaram camp, we found out that they had screened 118 people that day, 29 of whom were found to have cataracts and were referred to Hyderabad for surgery the very next day.

As we landed in Hyderabad, the former home to the Acumen Fund India office, and absorbed the stark contrast of rural and urban India, a sight which is so familiar across the country. As we drove into the city from the airport, on massive concrete flyovers, we were eager to see patients we met in Maharaja Nagaram; Parvathamma, Sanyasamma and Appelaswamy to find out if they had arrived for their operations. (Pictured right: Greeted with skepticism. A tribal from a village on the AP-Orissa border.)

The familiar and encouraging site of a packed waiting room greeted us when we entered the main PVRI facility. We were proudly taken around the hospital from one room to the next, met by friendly smiling faces every step of the way. However, one ward in particular stayed with us. This small room was filled with patients from Bellampally, a village in the tribal belt of Adilabad. Gnarled by a lifetime of sunshine and manual labour, four women and two men greeted us with warmth and enthusiasm, all donning space-age post operative glasses. These people were distinctly different from those we had spoken to at the eye-camp. They seemed empowered. And even though they gracefully bent down and joined their hands in the Indian sign for gratitude, they seemed to possess a sense of dignity that had been missing in the patients we met only a day before. 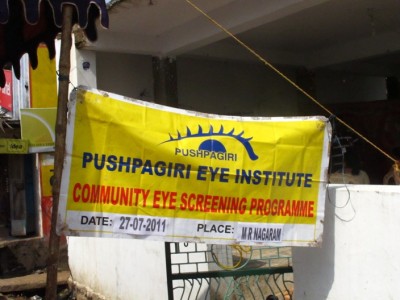 (Above: A banner advertising the eye-screening camp in Maharaja Nagaram)

Walking through the hospital was like walking through a transporter of sorts, where we could really see the impact that PVRI was having. CEO Hari is very open with his praise for Dr. K Viswanath, chairman-medical for PVRI, to whom he attributes the success of PVRIs tight operational procedures. It’s hard for Dr. Viswanath to choose just one story that motivates his work, but on our insistence he shares a story of young tribal boy. This child was born with eye-problems and came to the PVRI hospital for his surgery that would allow him to see for the first time in nine years. Dr. Viswanath relayed how the boy ecstatically ran through the hallways of the hospital, experiencing the world and all its colours for the very first time. It’s a moment I will hold dear always, the doctor said, with a soft smile on his face and a twinkle in his eye.

PVRI has successfully reached hundreds of thousands of patients in the past 7 years. Its goal is to reach as many patients as possible and Acumen Fund’s investment is to support expansion plans for two new hospitals in Vizianagaram, in the North East of Andhra Pradesh and in Kadapa, in the South East part of the state, to enable them to better serve these communities and reach a larger number of low income patients.