Rethinking the Role of Business in Conservation: Why Small Local Enterprises are Key to Biodiversity and Climate Action

Climate change mitigation and adaptation are the focus of widespread and growing discussion in the global development sector. But these discussions tend to overlook the conservation of the planet’s biological diversity. For instance, even at a climate change forum as ambitious and wide-ranging as last year’s COP26 summit, the loss of biodiversity received little stage time. And though one of the major outcomes of the summit was the commitment by over 140 world leaders to halt deforestation by 2030, the pledge is largely centred upon forests’ value in mitigating climate change, while it places a lesser focus on the substantial impact of deforestation on biodiversity.

The lack of attention towards biodiversity is likewise reflected in the exposure (or lack thereof) that the “other” COP received last year. The first part of “COP15,” the UN Biodiversity Conference – a two-part event hosted by China – took place in an online format just weeks before COP26. But it attracted little attention beyond the realm of biodiversity players and news outlets.

However, climate change and biodiversity loss are two sides of the same coin. And while biodiversity conservation still lacks the necessary recognition as a critical variable in addressing the climate crisis, it is now widely recognized that both international climate and biodiversity targets can only be achieved with the private sector playing a key role. Unfortunately, efforts like COP26 have tended to fall short in envisioning a role for the private sector that goes beyond its ability to provide climate finance.

Likewise, the contemporary debate on business and biodiversity still takes a narrow view, focusing mainly on how to fund large conservation projects with private money, and how to motivate corporations to become more biodiversity-friendly. But instead of trying to fit nature into conventional business logic, we should start recognising that nature protection is itself a viable business proposition. The best therapy for our ailing planet is to empower local businesses that profit from the protection or restoration of nature, and to integrate local communities into their value chains.

Rethinking the role of business in nature protection

In a world ruled by capitalist modes of production, we must find ways to consummate a marriage between market-based solutions and nature protection. To that end, a critically overlooked but impactful group is local biodiversity enterprises with innovative business models and an intrinsic motivation to conserve local wildlife. Biodiversity enterprises are micro, small and medium-sized enterprises (MSMEs) operating at the community level and using market-based mechanisms to sustainably manage, restore and protect biodiversity-rich ecosystems. These enterprises, by using business approaches and including local communities and marginalised people in their value chains, can resolve the dilemma of having to choose between economic development and ecological protection.

Biodiversity enterprises do not reinvent the wheel of business – they sell products and services for a profit, just like any other company. But they make the restoration, management or protection of biodiversity a crucial variable in the products or services they offer. While other companies make money from exploiting nature, these businesses make money from nature protection or restoration.

The table below gives several thriving examples of biodiversity entrepreneurship. For example, enterprises like Ikusasa Environmental Services, which operate in areas with uncontrolled invasive plant species, have specialised in products such as essential oils made from processing these plants, thereby increasing biodiversity integrity while generating profits. Enterprises in highly diverse ecosystems, such as primary rainforests, have established partnerships with indigenous communities and farmers to sustainably buy, harvest and process medicinal plants and herbs (e.g., Muthi Futhi) and honey (e.g., Green Honey), ensuring an equilibrium of resource extraction and fair product prices. And tree nurseries focusing on climate-resilient cashew seedlings (like Mootoo Cashew Suppliers) generate revenue while simultaneously rebuilding depleted ecosystems. 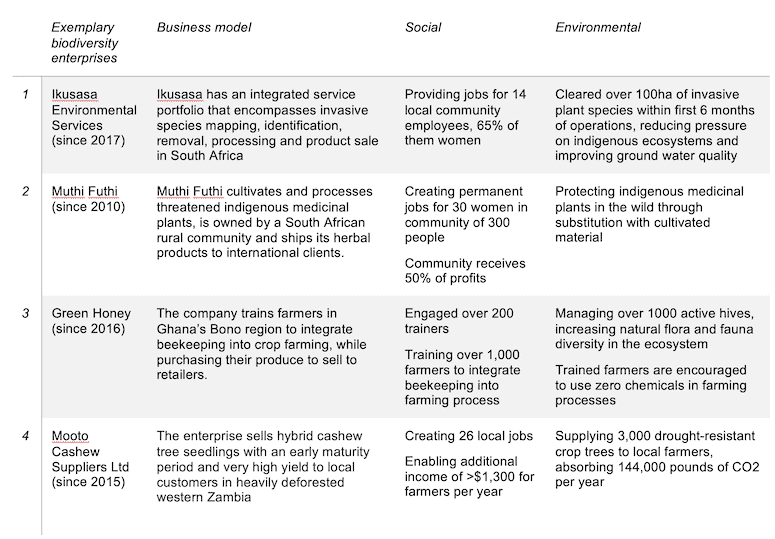 Biodiversity enterprises like these are operationalising the concept of nature-based solutions – a term that’s currently playing a very prominent role in international environmental debates, going hand-in-hand with the well-known concept of ecosystem-based adaptation. They significantly contribute to the protection, sustainable management and restoration of natural and modified ecosystems. At the same time, they are locally based, known and accepted, and they hire locally for the long term. That way, they also address societal challenges like unemployment and poverty effectively and adaptively, simultaneously providing benefits to both human well-being and biodiversity.

Breaking away from the mainstream of current conservationism

However, biodiversity MSMEs are far from mainstream. In addition to the challenges faced generally by MSMEs in low-income economies – primarily the lack of financing options and supportive policy frameworks – biodiversity enterprises are burdened by a lack of recognition from major biodiversity and climate stakeholders. Many of these companies do not make it to maturity. As small-scale businesses, they do not have access to the same resources as large public environmental and climate projects with sophisticated monitoring and evaluation frameworks and the capacity for detailed data collection. This lack of impact measurement and reporting capacity also leads to their exclusion from existing biodiversity and climate financing and support schemes, which are usually designed for large-scale, internationally certified business actors. It is an upside-down system, in which local biodiversity MSMEs struggle to find support to scale-up their conservation-driven business models, while conventional businesses use funds dedicated to nature conservation only to launch nature-friendly niche products – without ending their harmful business-as-usual operations.

To unlock biodiversity enterprises’ full potential, international conservation needs a paradigm shift. The solution is not ill-planned, temporary public conservation projects or short-sighted attempts to insert nature protection into conventional business operations. Private sector, public and non-governmental conservation finance has to increase substantially – but local private sector actors also need access to funding, as they know best how to tackle local issues and get buy-in from their communities.

Although there are some promising first steps in this direction from biodiversity enterprise-focused funders like CI Ventures and Mirova, their budget and beneficiary volumes are still marginal. To advance these efforts, policymakers at the national level must create finance and policy frameworks to help small-scale biodiversity enterprises grow and scale up their impacts. Locally-based, community-embedded business actors are the central piece in the puzzle of successful biodiversity and climate action. It is time biodiversity enterprises receive the exposure and support they deserve, both during the upcoming second part of the COP15 Conference and beyond.