Weekly Roundup 2/8/14: Why the Hult Prize is Tackling Health Care in the Slums: Social entrepreneurs tackle toughest ‘President’s Challenge’ yet

How do you solve the world’s toughest challenges? One way is the launch the world’s largest student competition.

That’s the idea behind the Hult Prize, which is designed to get students at universities around the world thinking about business solutions to global problems. The winners get $1 million and the chance to bounce their social enterprise startup ideas off some of the brightest minds in the international business community.

The Hult Prize is presented in partnership with the Clinton Global Initiative and focuses on a particular problem chosen each year by former President Bill Clinton. In his 2014 President’s Challenge, Clinton is asking the teams of four or five students to “build sustainable and scalable social enterprises to address non-communicable disease in urban slums.” And, to top it off, the challenge calls for all this to be completed by 2019.

Among 10,000-plus applicants this year, more than 200 regional finalists have been selected. The next round of competition will begin in March in Boston, San Francisco, London, Dubai, Shanghai and Sao Paulo. Winners there will spend the summer at the Hult Prize Accelerator, where they’ll hone and then make their final pitch. The ultimate winner will be named in September.

Previous challenges were “One Laptop Per Child” in 2010; “The Clean Water Crisis” in 2011; “Global Poverty” in 2012; and “The Global Food Crisis” in 2013. Clearly, these are all complex issues. This year’s challenge, however, might be the most complex yet.

Slums are informal, many times illegal, settlements. Residents can’t typically depend on government services; in fact, slums exist because of government failure. 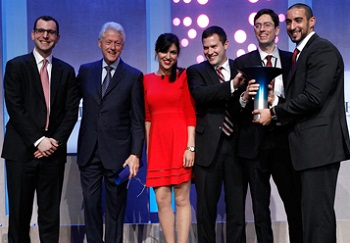 Yet the numbers in these informal, service-free places are staggering. According to the challenge, 250 million slum dwellers around the world suffer from chronic diseases, and that number is growing at a scary pace. More than half the world’s 7.2 billion people live in urban areas, and “approximately 180,000 people move to cities every day. Researchers suggest that current cities will have to expand by an area equivalent to the size of Greater London every month for the next 40 years.”

The non-communicable diseases that dominate in the slums are cardiovascular disease, cancer, chronic respiratory disease and diabetes. In other words, the same diseases the rest of world struggles with.

The difference is people living in slums sometimes don’t even officially exist and haven’t been able to count on consistent help from governments or NGOs. Social enterprises – with their focus on sustainability as opposed to donations – might be the best hope.

And who better to come up with promising social enterprises than promising young people, undaunted by legacies of failure and Hult’s challenge to “tackle grave issues faced by billions of people”?

Past winners of this prize have been amazing. We can’t wait to see what solutions the students come up with this year.

Speaking of solutions, the three finalists for this year’s World Design Impact Prize have been announced, and two health care ideas are included: the ABC Syringe and the BioLite HomeStove (see below). The winner will be announced Feb. 28.

NexThought Monday – Money Stories: What if financial products could accommodate the tales we tell ourselves? By Ignacio Mas

Flushing Five Myths About the Business of Sanitation By Jemima Sy

Keeping Your Impact Business Team Motivated: It starts with knowing their motivations By Frederica Marques

Is Africa ’Rising’ or ’Falling’? : The question is not which narrative is true, but which will win? By Nathan Gamester

Banking on Impact: Building the business case for social and environmental due diligence in lending By Jesse Last and Mike McCreless

A Bank Account for All Adults … By 2016: India’s Nachiket Mor committee report has made headlines – will it make an impact? By James Militzer — WDI