More than Ceremony: In Rwanda, Reflections from the 10,000 Women Graduation

The road from the airport to my hotel is a 20-minute winding drive, through the hills of Kigali. It was evening, and the city lights were burning; but not yet bright enough to compete with the stars. This was a return trip to Rwanda, and every time I take this initial ride, I scan the streets comparing to what I saw I last time, looking for familiar sights and additional improvements. New landscaping, new traffic lights, improved roads, the same police at every corner, and usual hustle and bustle of a city not ready to sleep. The taxi driver noticed my smile, and asked if this was my first time. When I tell him this is my eighth trip. He said, “Ah, I can see you like Rwanda.” Yes I do.

I’ve returned to spend the week overseeing the preparation for the graduation of the eighth cohort of the Goldman Sachs 10,000 Women Entrepreneur Certificate program. On July 27 (a Friday), the First Lady of Rwanda Jeannette Kagame, would be attending our ceremony as 29 women are awarded their certificates. We are honored that she is able to attend, and eager for her to not only celebrate with us the completion of an extensive, nine-module, 31-day training program, but also to see what an amazing group comprise the 10,000 Women Rwanda graduates.

A few days before graduation, I attended the practice for a skit to be performed at the ceremony. The women represented seven cohorts of graduates, spanning four years. When I arrived early, about half of the graduates were already waiting. The remaining trickled in, smiling to the group, before finding another from their cohort. A spontaneous smile would light their faces before greeting one another in traditional Rwanda-style: brushing first their right cheeks together, then their left, their right cheeks again before pulling back to shake each others’ hand. They greeted one another in Kinyarwanda, but even without understanding their words, I could feel the warmth and joy they had for one another. During the next hour, the women teased, corrected, guided, and finally concluded with praying for one another and that the graduation would go well.

The following day, I attended the business plan competition for cohort eight. The soon-to-be graduates were presenting before a panel of judges. In the past, I have sat in on selection interviews and often heard women quietly confess, with eyes fixed on their folded hands, that this is their first time being interviewed. However, today the women were animated and excited to discuss their business; they could confidently answer any question presented. And even in the moments when it seemed the nerves might get the best of some of them, they were quickly supported by classmates with smiles, cheers, and encouragement. The graduating class consisted entirely of female owners or majority stakeholders in a variety of businesses including hardware stores, hair salons, tailors, bakeries, and wielding shops, to name a few.

To stay committed to the program takes sacrifice for the participants and their families. Classmates became champions and a support-group to one another. When reviewing program applications, the number one reason given for applying to the program is to build a network. For these women, networking is more than swapping cards and accessing if a business relationship would be beneficial. It involves sharing themselves. Business is personal. And this personal nature adds to the dynamic of the business success.

Thursday was the final meeting for all the 10,000 Women graduates participating in the ceremony. With the First Lady attending graduation the following day, nerves were high. Those selected to participate in the graduate mini-expo, ever businesswomen, were arguing and negotiating for the prized spot on the expo floor to meet the First Lady. 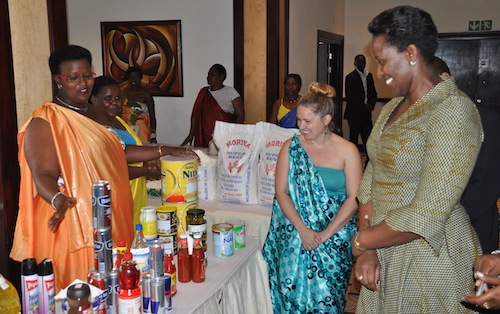 Friday, day of graduation; the months of planning and preparation was finally coming to an end. The graduates arrived early, dressed in coordinating traditional fashion: a skirt that gathers high on the waist with matching fabric tied at the shoulder and draped across the body. I could feel the excitement, the nervousness, and … the stress! Some of these women stopped their education at primary-six level, some of them never traveled to the capital city before this training, all were thrilled and amazed that the First Lady was coming; all were eager to make the perfect impression on her.

(Pictured left: Rwanda’s First Lady Jeannette Kagame chats with one of the graduates from 10,000 Women).

During the ceremony the graduates performed the skit they had practiced earlier in the week, each highlighting how the training impacted their businesses as well as their personal lives. The First Lady chuckled when Therese, from an outer district of Rwanda, said before the training she was intimidated by people from Kigali, but now she has the confidence to face anyone. Kagame spontaneously clapped when Christine, a tailor from cohort five, said the training program gave her the skills to advise her husband on how to start his own business. We were so excited to have the First Lady attend; it was fantastic to see her excitement in return.

For us, it wasn’t just a graduation ceremony for cohort eight (the program will have a total of 11 cohorts) – it was an opportunity to reflect and celebrate how far all the 237 graduates, starting from September 2008, have come. Rwanda has a tragic past, but a promising future. Of late, Rwanda has been making news based on its economic improvements. In my opinion, the secret to this growth are the women I described. I see them as the facilitators for the burgeoning success of Rwanda with their open hearts, innovative minds, and entrepreneurship spirits. With laughter, and joy, and friendship, and love, and hard work, and determination, these women and their businesses are refreshing springs to a community bringing new growth, new life and new hope.

The William Davidson Institute at the University of Michigan, in partnership with the School of Finance and Banking in Rwanda, manage and administer the Goldman Sachs 10,000 Women Entrepreneurship Certificate Program in Rwanda. Goldman Sachs launched 10,000 Women globally in March 2008. It is a $100 million, five-year campaign to foster greater shared economic growth by providing 10,000 underserved women around the world with a business and management education. The program is coordinated in local markets by a network of more than 80 academic and NGO partners and is in 43 countries.