ShelterTech Mexico 2017: Promoting Entrepreneurship and Investment in the Housing Sector

For more than 50 years Habitat for Humanity has worked in 1,400 communities across the U.S. and in nearly 70 countries and has helped 9.8 million people achieve strength, stability and independence through safe, decent and affordable shelter. Almost a quarter of the world’s population lives in substandard housing. According to a 2014 report by McKinsey Global Institute, an estimated 1.6 billion people will lack adequate shelter by 2025, impacting their health and livelihoods and their children’s education. Habitat’s construction efforts alone cannot keep pace with the massive and growing need. In fact, no response by governments or private philanthropy alone can meet the shelter needs.

To accelerate private-sector solutions that meet the needs of low-income households, Habitat for Humanity launched the Terwilliger Center for Innovation in Shelter in 2016. The center aims to mobilize investment capital to the housing sector, facilitate and advise housing market actors, and advance the knowledge around adequate housing and market systems, with the goal of helping markets better reach the housing needs of low-income families. In Mexico, the Terwilliger Center works through the Centro de Innovación a la Vivienda (CIV), established in 2014 by Habitat for Humanity Mexico, to implement housing market-related programs.

Last February, the Terwilliger Center and the CIV launched ShelterTech Mexico 2017, a three-month accelerator focused on startups that are increasing access for marginalized communities to basic services in any of three areas: water and sanitation, energy, and innovative construction materials. Our partner in this program was Village Capital, a global entrepreneur support organization, which provided the methodology for the program and accompanied us throughout the process. The Village Capital methodology is designed for high-growth enterprises seeking to raise money from venture capital investors. Throughout the investment-readiness program, companies evaluate one another – and themselves – through the lens of an investor, as they participate in a collaborative, rigorous peer due-diligence process.

For our first cohort, we selected nine startups out of over 50 applicants from across Mexico. The participants worked on various aspects of their businesses including equipment, problem and vision, value proposition, market validation, business model, product and market adequacy, scale and growth, and liquidity. Throughout this process, the startups interacted with mentors and investors in the housing sector, exchanging ideas and receiving useful advice.

In my experience with the accelerator, some of the most valuable feedback was generated within the cohort itself, as the level of trust among cohort members strengthened month to month, making the evaluation and feedback sessions more enriching. On the first day of our program, I met representatives of all the companies that we had spent several weeks analyzing, and finally those ideas and numbers had faces. At first everyone held back – after all, we were all strangers – but over the following weeks a community was formed in which concerns and advice were exchanged and friendships forged. We were also able to see the progress each company made: some making changes to their business models, with others improving their products, sales strategy and pitches. The evolution of all of the startups was palpable. It was surprising to me to see the alliances that were made among all the participants; we even saw a cross-entrepreneur investment arise! 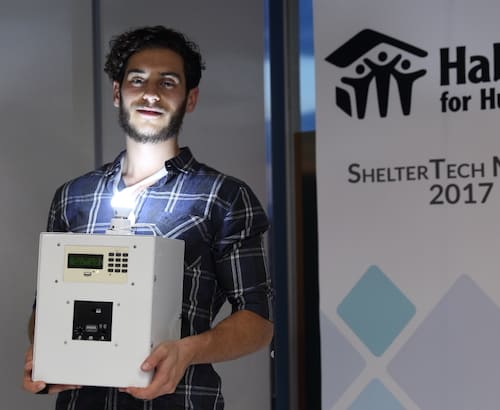 At the end of the program, the startups evaluated one another using the Village Capital peer selection methodology to determine the two companies best prepared to receive an investment of US $50,000 each. Who, after all, is better suited to evaluate you than someone in your same position? Scores are transparent and normalized using Z-score. Teams don’t self-rank, but they are required to defend their scores face to face. I am very maternal, so while I couldn’t say that any one team was my favorite “son,” it was very rewarding when the cohort selected the two winners: Energryn and Vitaluz.

With nine patents, Energryn is the most patented company in the world in the field of solar water heating. SOLESYTO, their solar water heating solution, is a hybrid system with the smallest ecological footprint in the world. This is particularly important in Mexico, as the country consumes the most liquefied petroleum gas (LPG) per inhabitant in the world. An average per family expenditure is US $21.50 per month, and in 2017 the average price of LPG increased by more than 35 percent. Beyond the expense, more than half of Mexican households lack a water heater and only 1 percent of homes have a solar heater, in spite of the fact that Mexico ranks third in the world for average solar radiation. One feature of SOLESYTO that really excited me is Energryn’s decision to use a lightweight design so that women could carry and install it. Energryn breaks with the traditional male-dominated scheme in both the thoughtful design and in hiring women for the task of installation.

Vitaluz addresses another pervasive issue in Mexico: Approximately 3 million people (600,000 households) in Mexico lack access to electricity. These families are forced to use lighting alternatives that are both costly and harmful to their health and the environment. Yusef Jacobs, Vitaluz CEO, explains his company’s solution clearly: “Through our prepaid solar systems, we offer electricity and lighting to the Mexican population that is not connected to the electric grid, and we do it in a sustainable, autonomous and more affordable way than common alternatives.” Through a portable solar panel system, Vitaluz offers a sustainable, prepaid electricity service that is cheaper than the alternatives, offering both economic savings and a better quality of life to its users.  Jacobs is a creative, young entrepreneur, and he seems unstoppable. He told me that when he first had the idea for the solar solution, he immediately went about creating a prototype. He has worked hard to develop the initial cardboard box prototype into a solution that can be implemented across the country.

For Habitat for Humanity’s Terwilliger Center, the ShelterTech Mexico 2017 program is a key contributor to our mission and a clear example of the role of a facilitator.

“Over the next decade, we hope companies we are working with will be some of the major players bringing solutions for the Base of the Pyramid. It’s a long story. Who is the next generation of game changers for energy, water and housing in Mexico? Good ideas and good entrepreneurs around the world should help power the next generation of affordable housing,” said Patrick Kelley, global senior director of Habitat’s Terwilliger Center for Innovation in Shelter.

Melva Flores is the manager of housing market systems at Centro de Innovación a la Vivienda in Mexico City and is one of Habitat for Humanity’s Terwilliger fellows.

Photo: Representatives of Energryn, courtesy of Habitat for Humanity

Tags
Base of the Pyramid, business development, social enterprise