Housing and sanitation: Perhaps no two sectors have greater potential for substantial impact on the many complex problems facing humanity – if their solutions are scaled.

What is particularly exciting about affordable housing is the fact that it’s a platform for dramatic changes in other sectors, explained Matt Franklin of MidPen Housing Corporation, a nonprofit that develops and manages new low-income housing. He said providing safe, affordable and stable housing frees up time, energy and money for individuals and families to deal with other priorities in life which are usually around health, education and advancing their general well-being. In a separate session focused on sanitation, Anthony Kilbride of SOIL pointed out that when you address the sanitation value chain (beyond basic access to toilets) and transform waste into compost and biogas, the impact moves beyond the expected health impacts and into other sectors such as agriculture, reforestation and energy.

But what is limiting sanitation and housing solutions from scaling? Panelists in three different sessions – one on sanitation, another on housing and a third on scaling impact – provided similar answers to this question.

For one, more standardization of solutions is critical. As Kevin Starr of Mulago Foundation pointed out, solutions have to be simple and replicable with minimal moving parts if the government, the private sector or nonprofits are going to take them to scale. These sentiments were echoed in the housing and sanitation sessions with Dana Pancrazi of F.B. Heron Foundation, who noted that standardization is necessary because customization limits scale. Innovators need to create a robust and “idiot proof” system if the private sector is going to get hooked, added Kilbride.

Another answer is that much funding is directed toward the latest fads. Starr said funders have a tendency to look for the new bright shiny thing and, when it’s ready to scale, they all move on to the next new thing. Pancrazi echoed the sentiment in a separate session on housing, as did Anoop Jain of Humanure Power in a session on sanitation, when he urged investors to understand that there is no silver bullet solution to sanitation. During the scaling impact session, Greg Coussa of the International Centre for Social Franchising agreed that the field needs a fundamental shift away from focusing on the bright star or silver bullet. It’s time to scale what has already been proven and rather than scaling a project, funders need to commit for the long haul, he said. 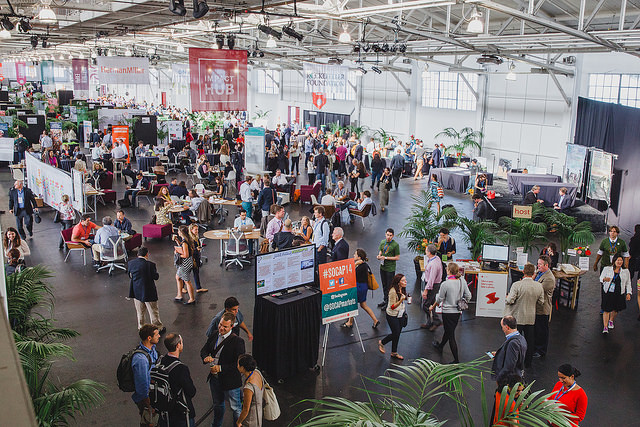 All three sessions also noted the need for collaboration across key stakeholders (government, investors, foundations, nonprofits, MNCs and enterprises) to scale at a larger level. Pancrazi emphasized the need for collective solutions, including building a gateway for investors. Given that the government is a key player in bringing sanitation solutions to scale, Jain called for conversations focused on strengthening the efficiency of government services. Sebastian Tilmans of Resource Sanitation added that more work needs to be done to design tools such as software for waste collection so they are applicable in multiple contexts and can be leveraged by different solutions.

And, of course, lack of data also came up in all three sessions. Pancrazi stated that much more can be done on data aggregation. The chronic lack of data was also echoed in a separate session when Coussa said that in many cases we are simply not measuring enough.

A unique challenge to scale was brought up in the sanitation session – the need for behavior change. Panelists were quick to clarify that the problem with use usually has to do with the service provided, not the users. Jain expressed frustration at recent publications in respected outlets such as The Economist that hinted the rural population in India prefers to defecate outside. Jain said it is not only about availability of toilets at home, but also the availability of toilets outside the home near where people work and go to school, as well as the associated costs. Kilbride also explained that Ecological Sanitation (EcoSan), when human waste is collected and recycled for use in reforestation and agriculture, requires more education. Kilbride’s company, for instance, spends a lot of time with a community before they introduce toilets there. They first show them the actual toilet and explain how the urine diversion mechanism works, then they show them the compost and take them to the conversion facility and a garden that uses the compost.

At the end of the sanitation session Jain reminded everyone that to scale, regardless of what type of stakeholder you are, “you have to stay committed – (and in the case of poor sanitation) too many people are dying of diarrhea, dehydration, HIV/TB.” With more standardization of solutions, collaboration across stakeholders and funding for the long haul we will be able to scale proven solutions and contribute in bigger ways to poverty reduction.

Heather Esper is the Program Manager of Impact Assessment at the William Davidson Institute at the University of Michigan.