All images by Jonathan Kalan

The Democratic Republic of the Congo (DRC) and the world of social entrepreneurship may seem strange bedfellows. One is constantly in the media for its good, the other for bad. One demonstrates economic empowerment, the other an absence thereof.

In fact, the most internationally known ‘enterprises’ in the Eastern DRC, a region plagued first by civil war, then ethnic conflict, and now roving militias funded by foreign militaries, seems perhaps as far from ‘social’ as you can get. Brutally controlled mines, illegal logging and poaching, raw mineral extraction, the list goes on.

But here’s where we may be wrong.

A major Post-Conflict Environmental Assessment of the DRC, partially released in October 2011 by the United Nations Environment Programme (UNEP) underlines the global significance and extraordinary potential of the country’s natural and mineral resources, and puts social entrepreneurship in the spotlight as a way to help realize it.

It seems that DRC’s tiny ‘social economy’ has been a natural outgrowth of the failure of the state, the informalization of the economy, and the collapse of social services. This led to, as the report puts it, a spontaneous creation of community managed “associations… found across natural resource based sectors – agriculture, mining, forestry, fisheries and water” that continue to thrive to this day.”

I spoke to Hassan Partow, the DR Congo programme manager at UNEP, who worked on the report, and he filled me in further. “While the DRC may institutionally/administratively be a ’failed state’, it boasts a very dynamic and robust society” he wrote in an email. “As a result, social and environmental entrepreneurship has great potential. However, due to the lack of vision and policy support, the potential of these social enterprises has remained stifled in the form of non-profit associations.”

Yet these social entrepreneurs do exist, and given the vast wealth of natural resources the DRC holds, if resources are harnessed properly by local communities and entrepreneurs, they could be significant catalysts for economic and social development. As just one example, the DRC has the second largest forest carbon stock in the tropical world-giving it a clear major stake in the carbon market.

Weeks after learning about this report, as I bounced through Eastern DRC’s Ituri region, I kept my eye out for stories that could perhaps shed some light on this revelation.

The first man we met in Bunia, the quickly recovering capital of Ituri, was Kalongo Rwabikanga (pictured below). He was, by all definitions, the kind of guy I was looking for. 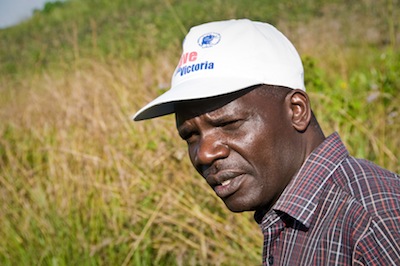 An inspiring Congolese man in his 30s, his organization Synergie Simama has brought together the work of ten local grassroots organizations around Ituri after the conflict, to empower and assist disabled and vulnerable communities through vocational training, physiotherapy, surgeries, education, and much more.

Kalongo left Bunia in 1999, when Congo’s second war broke out, to pursue a Masters degree in community development in Nairobi. “I left with an objective”, he told me, “because the situation in Bunia needed to change. There was a lack of knowledge about development, and if I had the opportunity to go to Nairobi to acquire the skills, I could return to help the community”

Despite tempting job opportunities elsewhere, he in fact returned in 2004, and saw a tremendous increase in the number of people left disabled from the violence, and realized a single project could not take care of everyone.

Treating disabilities is different from treating other illnesses. Malaria can be treated in a week- yet orthopedic surgery, or physiotherapy, is a long process. With limited budget support from Irish Aid and Catholic Blind Missions, Synergie Simama asks for direct community participation. People give what they have- If they don’t have, they don’t give. Many don’t have, so Kalongo decided “let’s increase the community capacity, so that the community can effectively contribute to the process of rehabilitation” 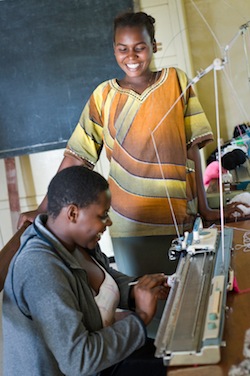 As a result, Synergie Simama now has several vocational training centers that teach sewing, tailoring, carpentry and welding, and help disabled individuals become economically independent and re-integrate into their communities. The organization also has begun large-scale agricultural activities. With a tractor, they help two communities (which were in direct conflict nine years ago) cultivate acres of communally-shared land. Apart from an increase food in the community, the families are able to sell the excess and generate some income to contribute to the rehabilitation process.

“Reducing community poverty, and bringing the community together to help people with disabilities” is how Kalongo puts it.

In Bogoro village, the site of a brutal one-day, 200 person massacre back in 2003, we arrived just one day before Bogoro Muungano Kwa Maendeleo (BMM) was to graduate its fourth class. A sewing vocational center for at risk and disabled women, BMM (students pictured at right) is one of Synergie Simama’s most successful projects. The following morning, 15 women would take off on bus to their home villages armed with new skills, and a brand new sewing machine. According to Kalongo, 70 percent of graduates find or make work for themselves after the program.

Though I often write to shift the narrative of Africa toward a more positive tone, even I must confess, I did not expect to see such signs of hope and community-based entrepreneurship in the eastern Congo – and there are many more examples. And it’s not just the business that’s important to them. “We are clearing our minds of war,” one man told me.

Many of the social enterprise examples we explore on NextBillion are in relatively stable environments. Looking at the DRC, I have begun to wonder: What is the role of social enterprises in conflict resolution, and in both ongoing or post-conflict areas?

Tags
Base of the Pyramid, entrepreneurship, skill development