Special Series (Part 3): BPO for the BoP : The trials and successes of an early-stage Impact Sourcing Service Provider in Africa

Editor’s note: This post is the third in a six-part series examining the emerging Impact Sourcing space through work performed by the William Davidson Institute (WDI) and funded by the Rockefeller Foundation.

In part one of our series on Impact Sourcing, we defined the term and some of the factors accelerating Impact Sourcing’s growth. In part two, we explored the major trends driving the development of Impact Sourcing, assessed its potential and discussed the challenges that have hindered the space to date.

We will now focus our discussion on Impact Sourcing Service Providers (ISSPs), which constitute a critical component of the emerging Impact Sourcing space. ISSPs are business process outsourcing (BPO) organizations with the specific social objective, often outlined in their mission, to hire workers from poor and vulnerable communities to perform BPO work. While the first ISSPs emerged in rural areas as reaction to rising costs in Tier 1 and Tier 2 cities in developing countries, they have begun forming with the explicit and purposeful intent to employ and advance those from the BoP and other traditionally disadvantaged communities.

To gather a more comprehensive and wide-ranging perspective of ISSPs, the WDI team visited three organizations based in Kenya at various stages of development. They ranged from an early-stage enterprise to a mature organization looking to scale. With these field visits, we hoped to gain a deeper sense of the impacts ISSPs were having on the lives of the people they employ, learn about the key challenges that ISSPs currently face, and better understand the best practices and lessons learned by ISSPs to date.

One of the WDI team’s visits was with Impact Sourcing Africa (ISA), a new ISSP in Kisumu, Kenya. ISA commenced operations in October 2012 and aims to provide employment opportunities to poor and vulnerable communities from the Nyanza region of Kenya. Specifically, ISA aspires to create social impact by providing employment to youth in the year between high school and college to enhance their skillsets, provide valuable formal sector work experience, help them earn income to pay for family and personal expenses, and to keep students busy and engaged as they make the transition to college.

The four founders of ISA were entrepreneurs who did not have previous BPO industry experience. However, they were excited by the potential of Impact Sourcing to serve has a transformational tool in the lives of the disenfranchised youth in the Kisumu area. “The more I learned about BPO and Impact Sourcing, the more I saw the potential to affect more than a few lives, but the ability to really transform people and impact their families as well,” says Stella Opondo, one of the ISA founders.

Despite a lack of experience, ISA’s founders gained both the information and confidence to launch the business by participating in the Enablis Rockefeller Impact Sourcing Project (ERISP). The Enablis Entrepreneurial Network, a Canadian-based nonprofit focused on supporting entrepreneurs in the developing world, received a grant from the Rockefeller Foundation to train the ISA team and others in the major aspects of running a BPO operation. Through this program and other networking summits, ISA eventually was connected to Rural Shores, an experienced ISSP based in India. At the invitation of one of Rural Shores’ co-founders, the ISA team visited and worked at Rural Shores operations in South India. While they found adjusting to the change in diet a bit difficult, this experience served as the launching point for ISA to begin its operations. 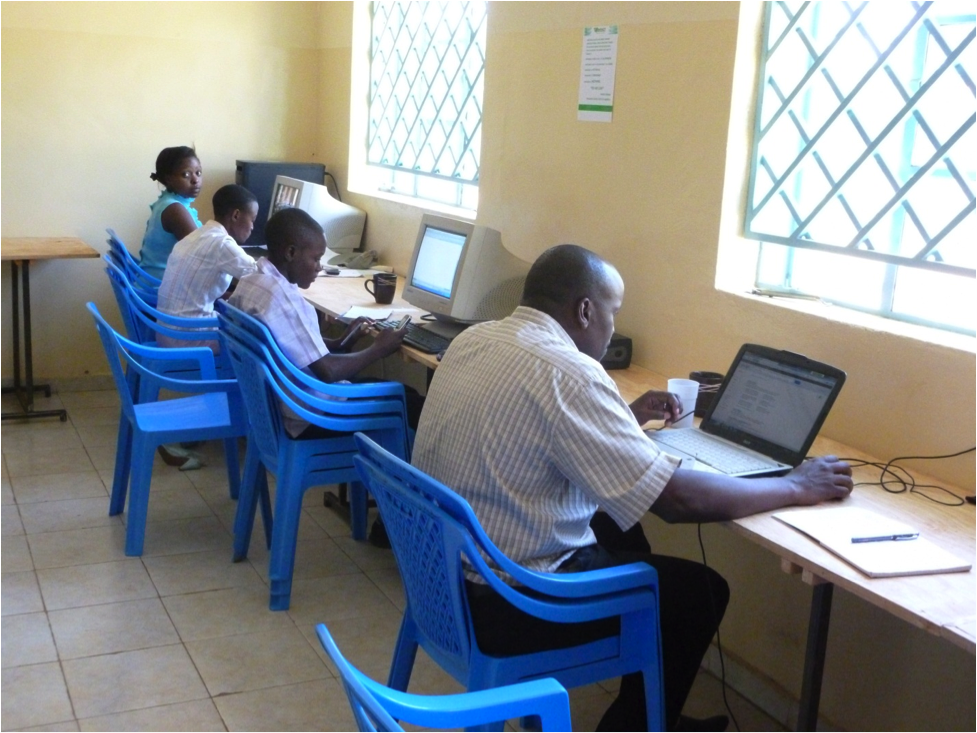 ISA founders have a grand vision for their budding Impact Sourcing enterprise. “Our goal is to hire 100 employees at our Kisumu center in the next three years and long-term ISA wants to develop similarly-sized centers in each of Kenya’s 47 counties,” says ISA Co-Founder Moses Nijiraini.

The organization is off to a solid start, already employing 11 employees, some of who are physically-disabled, and working through an intermediary with four UK-based clients to provide services such as content development for magazines. ISA sees short-term potential to expand to additional services such as data entry and transcription.

However, ISA has faced some challenges in achieving their ambitious objectives. As a start-up enterprise, ISA has had to be creative in terms of accessing resources. They rely on second-hand computer and office equipment. Their office is located inside the Rotary Youth Empowerment Center in Kisumu, which is provided at no cost by the Ministry of Youth and Social Services. The inability to purchase additional computers has been a limiting factor in hiring more employees.

While the founders have been impressed with the caliber and quality of the work ISA employees have produced in such a short span of time, training workers has been demanding. ISA has purposefully kept hiring requirements to the bare minimum; the only prerequisites are a high school degree and a willingness to work hard. As a result, newly hired employees have widely varying knowledge-levels (some without any previous computer experience). This makes developing a standardized training curriculum and program extremely difficult.

Much like other ISSPs that the WDI team visited, ISA has also had difficulty securing direct client work because of their lack of experience. A short track record can become a “chicken-and-egg” scenario – clients won’t work with ISSPs that don’t have experience, but an ISSP cannot gain experience without a few clients initially willing to take a chance.

Despite these hindrances, the positive atmosphere is immediately apparent when you speak to ISA workers. In addition to the benefit of increased income, employees discussed the development of new skills and an increased confidence in achieving their future goals as a result of gaining workplace experience.

It is this sense of employee optimism, along with the dedication of its founders, which ISA will need to leverage and build upon if it hopes to fulfill its mission of creating an impact in the lives of its employees.