In the fall of 2014, the Desautels Faculty of Management at McGill University began offering one of the first programs of its kind in Canada. Driven largely by student input and faculty collaboration, the concentration in Social Business and Enterprise is intended for students interested in harnessing the not-for-profit, civil and for-profit sectors to tackle social issues.

Students have been challenged to reconceptualise strategy formation and implementation with an emphasis on economic development, the environment, corporate social responsibility and social impact. Leading the effort is Robert J. David, Associate Professor of Strategy and Organization and the Cleghorn Faculty Scholar at the Desautels Faculty of Management. He is also Director of the Centre for Strategy Studies in Organization at McGill.

I interviewed Professor David as part of the Social Business Academia Report published by The Yunus and You Foundation in 2014. This report details the many social business activities that take place at universities around the world. It also features university profiles, interviews and book reviews. David’s experience at McGill is particularly illustrative of how scholars and students are working together to forge new curricula in the realm of social business.

Leonhard Nima: Could you please tell us about the concentration and the idea behind it?

Robert J. David: It is important to know where we started. McGill has had a concentration in this space – not necessarily and specifically in the social business space, but in the social context space – for maybe 15 years now.

The Social Context of Business concentration was a very general one for students who were interested in the not-for-profit and civil sector. We had a grab bag of courses that did not have a great coherence, but nonetheless gave students who were interested in the civil and not-for-profit sector something that they could take and put on their transcript. Over time we realized that this program needed to be revised and needed essentially more focus and coherence.

But at that time we, the faculty members, did not have a strong sense what that should be. At that point I met the student Joanna Klimczak, and it turns out that independently a group of students led by Joanna and Mariana Botero explored an initiative in the direction of social business. We had an interesting first conversation and had subsequent conversations about common interests, and decided to work together.

We came to the table with a very general sense of what we wanted to do, and Joanna and Mariana helped us to really sharpen that into what we see now. My research is not necessarily in the area of social business and in many ways, the students who are deeply involved in this space are much closer to the ground than we are as faculty members, who have interests for the most part in different areas.

LN: How did the faculty/student collaboration practically look like? Did you have regular meetings, and how long did it take to get the final approval for the concentration? 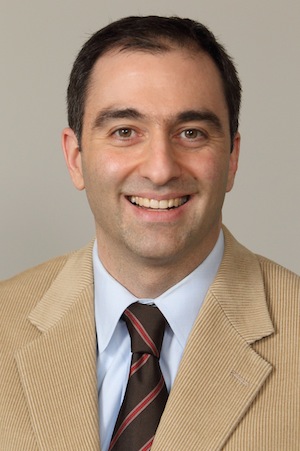 RD (pictured left): My area had formed a small task force with four faculty members to look into revising the existing concentration. The revision of the concentration was part of a larger project that also involved a Major in Strategic Management (a Major is ten courses with 30 credits and a concentration is five courses with 15 credits). The two students Joanna Klimczak and Mariana Botero were put on that task force as our student representatives.

Some people in my area wanted to call this concentration Social Enterprise. And Joanna and Mariana were quite intense on calling it Social Business. And frankly, as the chair I didn’t have a strong preference, the nuances on these terms were a little bit lost on me. Eventually we settled on Social Business and Enterprise and you may see this as a compromise solution, but I see it as something better than a compromise solution. I see it as something that conveys the meaning that both groups wanted to convey.

There were six levels of approval by six committees. To go from when Joanna and I first started talking to the Undergraduate Program Committee took about ten months. We first started talking in January 2013 and the final approval by the Senate came in April 2014, but that is not counting the pre-work that the students had done and the pre-work that we had done … which took a few extra months.

But I think the bulk of the work was from January until October 2013, because once it was approved at the Undergraduate Program Committee it was mostly set, and it was just a matter of running it through the additional committees.

LN: When is the concentration finally starting?

RD: We considered the starting for the concentration this academic year (2014/2015). That said, it is already on the books and any student taking the specific courses can already count these courses towards the concentration.

I should say that the Major in Strategic Management consists of our two concentrations, the Social Business & Enterprise that we have been talking about, and then we have Global Strategy, which one might consider a traditional strategy concentration that you might find at other schools. It has a very traditional business approach. The Major is actually a combination of the concentrations, roughly speaking. So students who graduate with that will have those two aspects to their curriculum, which I think will be very interesting.

LN: What are the main lessons learned? Any advice you could give to other universities that would like to start something similar?

RD: The main lesson learned is that faculty members really need to be open to their students’ ideas. A lot of faculties have students on the committees; they all have mechanisms for students to give input. But that is not necessarily the same as true collaboration. And the students who serve on these committees are not the only ones who should be listened to.

You have to talk to the department chairs, you (need) to get their permission, you (need) to talk about enrollment numbers, you (need) to talk about financial issues. Including courses from many different faculties in the university is a big, big deal. And that ends up being one of the distinctive things of this program. If you look at the courses you will see management courses, but you will also see courses from the agriculture school, geography, from international development, political science. And that is something quite unique, especially for business schools, which tend to not always speak to the other parts of the university.

The key turning point was when the group of students decided to work with us, and I think given what I know about university governance structures, it is exceedingly difficult for anything to happen without having the faculty on board. And I think the learning on the student side was to do it with us rather than parallel to us. In this case it worked out great, and unfortunately it doesn’t mean that it is always going to work that way. I think it was a question of the individuals involved to some extent. If this openness is shown more generally then it can work in many cases.

The student input was data driven. Universities and especially professors love data. We are academics, we like data, we like evidence, and the way Joanna and her colleagues presented things to us was very data driven. In many ways a lot of their input was related to the actual selection of courses. The students presented course outlines, learning points, how it fits with the concentration, and quotations from students who have taken the courses and what they have to say.

And any reasonable person, who looks at that, will say that this input is great. We expect students to bring enthusiasm, and certainly these students did bring enthusiasm, but what they also brought was an analytic and professional look at things, which we don’t always see. The level of maturity in terms of the way they were presenting, and the data that they would bring, was very, very high.

That’s what made things work.

Leonhard Nima is the Founder of Nima Social Business Consulting and an Adjunct Professor of Social Entrepreneurship at Hult International Business School in San Francisco.