On June 2, 2010, I lay in shock on a delivery bed at the Sutter Birth Center in Davis, California.

After days of grueling labor I had successfully delivered my son, Mason, but not without complications. For various reasons I began to post-partum hemorrhage, losing several liters of blood. There were a few chaotic, surreal moments where the people tending to me seemed to move in hyperspeed, while I lay shaking, gushing blood. It wasn’t until my team of midwives and nurses stopped the flood that I noticed the surgeon in the doorway awaiting news, or the crash cart team in the corner ready to sweep my baby away.

Once the bleeding had stopped, my medical care continued, as providers weighed the pros and cons of a transfusion or hysterectomy (I averted both), and carefully and routinely monitored my condition over the next few days and months. The care I received helped me make a full recovery, but the experience could very easily have permanently damaged my health – or even ended my life.

And this was in the United States.

Imagine how this scenario would unfold in rural Somalia—home to one of the world’s highest maternal mortality rates, according to the CIA World Factbook—where most women are delivering babies at home or in primary care centers that lack appropriate emergency medical facilities. If a mother-to-be begins to hemorrhage she may be hours or days away from a hospital, likely to bleed to death before she gets the care she needs.

This scenario isn’t unusual. Obstetric hemorrhaging is the leading cause of maternal death worldwide; every four minutes a woman dies from unstoppable bleeding during delivery. But about half of those deaths could be prevented using a new, incredibly simple first aid device called a LifeWrap—picture a scuba-style wetsuit sliced into strips that Velcro around a woman’s lower body. Made of neoprene, the LifeWrap is a non-pneumatic anti-shock garment (NASG) that helps to stabilize women experiencing post-partum hemorrhaging until they can receive appropriate care.

A pioneering team of researchers, led by registered nurse, midwife and Professor Suellen Miller at the University of California at San Francisco, created the LifeWrap based on various inflatable suits used in operating rooms and on battlefields over the past century. But rather than designing an inflatable device that would be too costly for low-resource settings, they repurposed the NASG for obstetrical hemorrhage. 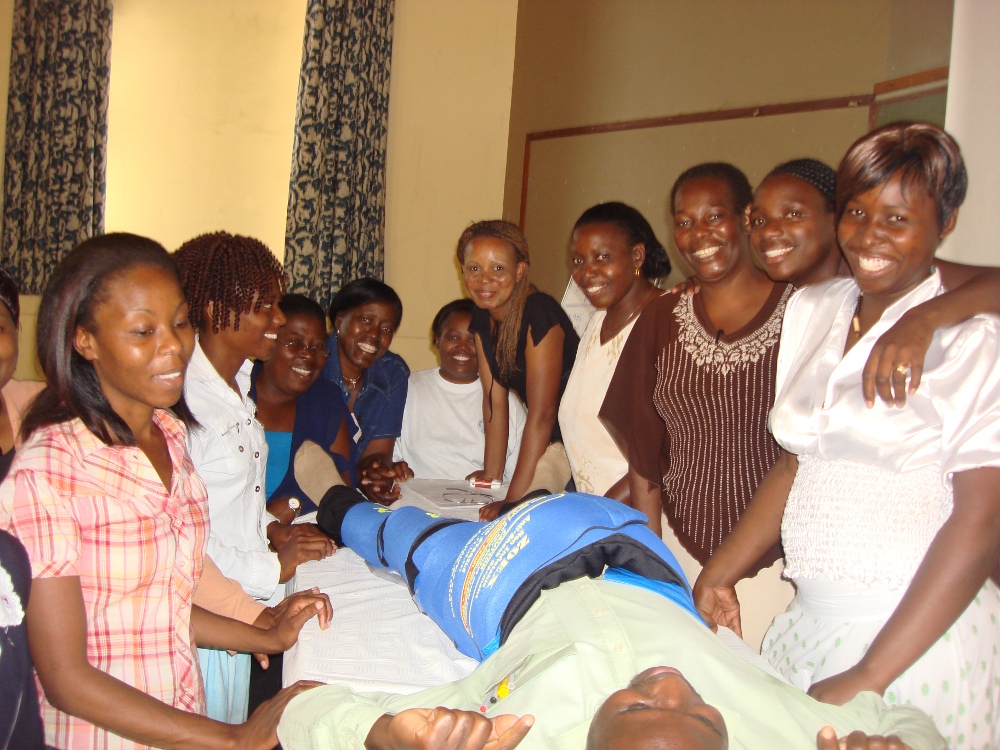 The LifeWrap doesn’t replace lost blood or treat the source of the problem, but it buys critical time. We go into shock when our brain, heart and lungs are deprived of oxygen. During a post-partum hemorrhage, shock is induced by both the loss of blood, and the accumulation of remaining blood in the lower abdomen and legs. The LifeWrap basically works by reversing this accumulation. The wide strips of neoprene and Velcro are tightly wound around a woman’s legs, hips and lower abdomen, creating a counter pressure that returns blood to the vital organs and decreases blood flow to the compressed areas (while also reducing blood loss).

(Left: A LifeWrap garment in use.)

So far, the suit has been found to be effective for up to 48 hours and can be used 40 times (washed with bleach in between uses) before needing replacement. More than 4,000 LifeWraps have been distributed in Ethiopia, Peru, Tanzania, Bangladesh, Nigeria, Egypt, India, Zambia, Zimbabwe, and Cambodia. Miller and her team at the Safe Motherhood Program/Bixby Center/UCSF have used the LifeWrap NASG on more than 5,000 women in four countries (Nigeria, Egypt, Zambia and Zimbabwe).

So why aren’t we seeing LifeWraps throughout the developing world? There are a few barriers to uptake. While seemingly simple to administer, the LifeWrap does require a bit of training, and it should be part of a broader medical strategy. This is necessary because if the LifeWrap is removed before the source of bleeding is corrected, the woman may go into a deeper state of shock.

Originally selling for a few hundred dollars, the cost was also prohibitive. But now that the Bluefuzion Group, a Hong Kong-based company, is manufacturing the device for around $56.00 USD, sales are up.

Miller and UCSF’s Safe Motherhood Program are conducting market research to better understand how the LifeWrap NASG functions in the real world, and to gain insight to improve user trainings. But their primary focus is clinical research. Without a marketing and sales team to serve as a conduit between UCSF and the international humanitarian organizations, professional associations and emergency rescue agencies that could use LifeWraps, dissemination will likely be rather slow.

Editor’s Note: Alexa Bach-McElrone is founder and principal of Bach-McElrone Consulting, providing sustainability and communications advice in the San Francisco Bay area and beyond. This is her first post as a NextBillion guest writer.