There is a widely held belief that the adage “cash is king” is especially true for those who have very little of it. Indeed, with news of stolen credit card data from the hacked cash registers at Target and of crypto-currencies, such as Bitcoin, enabling criminal activities, it does seem that plain old currency may have its advantages for all of us. And advocates for the poor often argue that cash is the most trustworthy payment instrument. The poor make their earnings in cash and make purchases in stores that deal primarily in cash. Lower income households have fewer connections with formal financial services systems, such as banks, credit cards, digital access or online payment systems. Likewise, for many small businesses, transacting in cash is often the preferred mode. A cash economy would appear to be the most inclusive relative to an economy with cash alternatives involving digital substitutes of varying degrees of sophistication and fee structures.

Unlike information products, such as film, books and video rentals, with viable digital substitutes, cash seems quite remarkable in its persistence in remaining in circulation. According to the U.S. Federal Reserve, as of June 2013 there was about $1.2 trillion worth of paper bills and coins in circulation in an economy that was estimated at $16.6 trillion in nominal GDP terms. While it has been steadily displaced by a variety of competitors, such as credit and debit cards and electronically facilitated payments and mobile payments, and now even by crypto-currencies, we cannot expect cash to disappear altogether. There are many reasons for its “stickiness.” Cash is accepted universally, as long as you are within the boundaries of the country issuing the currency; this offers the user a sense of security. It gives the spender a sense of control over spending. Most significantly, cash offers anonymity, which is an attractive attribute to many.

Simultaneously, moving beyond cash involves many switching costs that require coordination – because for each transaction, both parties must be able to use the same new system. With so many new digital options, it is hard for any single alternative to achieve scale, which makes it harder to coordinate. At the same time, regulatory constraints limit cooperation among the relevant industry players, such as banking services, telecommunications, software and retail, which continue to operate in individual silos.

Does this mean that the continued presence of cash is in the best interests of the poor? Not quite. Ironically, the stickiness of cash and its continued usage imposes significant social costs. Far from being an ally of the poor, it imposes disproportionate costs on those at lower income levels. My colleague Benjamin Mazzotta and I have been studying the costs of cash across a wide range of countries: U.S., Mexico, Egypt and India; we also expect to extend our research to Nigeria (see: http://fletcher.tufts.edu/CostofCash). With the exception of the U.S., these other countries represent economies primarily conducted in cash. The U.S. offers an interesting case study in what happens when about a third of all transactions are conducted through cash payments.

The use of cash involves several forms of social costs that disproportionately affect the American poor: 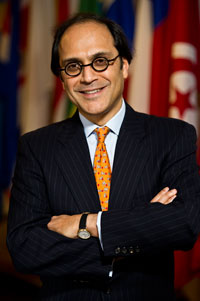 1. By FDIC estimates, 8.2 percent of U.S. households are unbanked and 20.1 percent are underbanked. Cash usage imposes a regressive tax with the highest impact on the unbanked. The unbanked pay four times more in fees to access their money than those with bank accounts, and they pay $4 in higher fees per month for cash access on average than those with formal financial services. They have a five times higher risk of paying cash access fees on payroll and Electronic Benefit Transfer (EBT) cards. Poorer consumers also have to spend far more time getting cash. On average, Americans spend 28 minutes a month travelling to get cash, but that time isn’t evenly distributed. People who don’t use a bank spend about five minutes longer getting to the place where they can get cash, and unemployed people spent nearly nine minutes more. (Taken together, these fees and time investments can be significant issues for people living at or near poverty).

2. For businesses, paper money has to be managed: it must be stored, guarded and accounted for. It can be difficult to transport and is inherently insecure. U.S. retail businesses lose about $40 billion annually because of the theft of cash alone. This cost is also disproportionately borne by smaller businesses – the “mom and pops,” many of which operate in poor neighborhoods and rural areas – that are more cash dependent and cannot afford sophisticated security and cash transportation services.

3. For the government, the annual value of under-reported taxes in the United States is $400 billion to $600 billion. According to the national taxpayer advocate’s estimates, 52 percent of this gap is because of under-reporting by self-employed taxpayers. If even half of this under-reporting is directly enabled by a cash economy, the U.S. Treasury loses at least $100 billion annually because of cash. The implications for a shortfall in tax revenues are quite direct in terms of their impact on the poor. About 12 percent of the federal budget in 2012 supported programs that provide aid (other than health insurance or Social Security benefits) to poor families. Such government safety net programs kept some 25 million people out of poverty in 2010. The existence of the tax gap puts pressure on the government to cut back on safety net programs, because they are the ones that are among the first to be cut.

It is also interesting to consider these costs of cash in the U.S. in the context of the corresponding burdens in developing economies, where cash use is much more prevalent. As part of an international study to analyze cash usage behavior in emerging markets across North Africa, Asia and Latin America, we have been conducting research in Egypt, India and Mexico. In a way, all developing economies have one characteristic in common, i.e. an overwhelming reliance on cash and a very low penetration of alternative payment systems. Each of these countries has a common set of challenges, e.g. infrastructure, tax evasion and distrust of institutions. However, each of the countries we have studied has its own idiosyncratic challenges. In a country such as Egypt, only 10 percent of adults have a bank account and less than 2 percent have a credit card; therefore, it is not surprising that 94 percent of financial transactions are conducted in cash. With the political instability in Egypt, financial institutions themselves face questions about their own future, a factor that will further deter consumers from embracing their services in the near-term. India, where about 60 percent of adults are unbanked, according to McKinsey, is also a cash-heavy economy. In addition to the prevalence of cash, its use as a percentage of GDP has been increasing by about 2 percent over the past two decades, possibly because of concerns about inflation. In Mexico, 53 percent of the value of consumer payments are cashless, according to studies done by MasterCard Advisors. However, this proportion is not growing; it has remained relatively static over the period of 2005-2011, and a sizable proportion of the transactions remain unrecorded because of the prevalence of the drug cartels in the country.

Each of the societies in these emerging markets pays a price for the heavy usage of cash – and this is not surprising. While the overall costs of cash usage in these markets are daunting, they are more evenly spread across the respective populations. Our research highlights the fact that a developed economy, such as the U.S., pays a price as well – but it’s a price of a different kind. Because of the high penetration of the financial services sector in the U.S., the disproportionate burden borne by those who are unbanked makes the inequitable spread of the burden particularly striking. This observation should be a call to action for decision-makers who care about social justice and inclusive policy. It is time we acknowledged the cash paradox: while cash may be considered the poor man’s best friend, the disproportionate burden it places on the poor also makes it an enemy.

Editor’s note: a version of this post was published on Harvard Business Review.

Bhaskar Chakravorti is the Senior Associate Dean of International Business & Finance at The Fletcher School at Tufts University and founding Executive Director of Fletcher’s Institute for Business in the Global Context.