The Implications of Scarcity for Microfinance: Grameen Foundation’s Alex Counts, on how understanding scarcity’s impact can improve microfinance practices

Just as increasing use of a “gender lens” has transformed thinking about and the practice of international development in recent decades, so too can behavioral economics in the near future.

In some cases, this discipline explains and reaffirms current practice. In other cases, the study of behavioral economics provides an alternative explanation of why some things work and others don’t. In still other cases, it suggests that current thinking and so-called “best practices” are wrong and counter-productive. Now and then, it prompts us to consider readopting a practice that has fallen out of favor. (For an introduction to the thesis put forward in the book “Scarcity: Why Having So Little Means So Much,” visit Part One of this blog.)

Now, I will comment on the specific insights and implications I see for microfinance and international development when looked at through a behavioral economics lens.

Group-based Lending Methodologies: The analysis of scarcity helps explain the power of, and the tendency to use, group mechanisms in microfinance. The frequent contact clients have with staff and other clients has the potential to “get inside the tunnel” poor people often experience (in which they’re intensely focused on making ends meet day-to-day), thereby mitigating some of the resulting destructive actions and behaviors. (Perhaps group methodologies should be re-thought through the behavioral lens to magnify this positive influence by refining how those contact points are used.)

It may be that the need to pay off one’s loan in public on an agreed-upon schedule incentivizes people to focus more on the medium-term considerations and strategies than would normally be the case for people who are “tunneling.” For instance, family members of loan clients may be willing to work longer hours or more productively, and less willing to give in to temptations, such as smoking or consuming alcohol, in order to meet their loan payment obligations. (The reduction in “sin expenses” in families taking a microloan has been confirmed in at least one randomized controlled trial.) “Scarcity” also gives a new explanation for the importance of frequent loan payments, as the authors say that having “frequent interim deadlines” is a proven way of penetrating the tunnel that a single deadline months off in the future usually cannot. It also raises questions about the wisdom of building in grace periods into loan contracts with low-income people.

The Role of Technology: This analysis has some interesting implications for the use of technology in microfinance. On the one hand, to the extent non-intrusive technology obviates the need in accessing financial products for human contact – contact that has the potential to pierce the tunnel and focus clients’ attention on so-called “important but not urgent” matters – it could be a negative influence. On the other hand, SMS reminders to do things that pay long-term dividends but would otherwise be neglected while tunneling – like saving small amounts of money or taking one’s medication on time – have shown promise. I find this a strong endorsement of Grameen Foundation’s rejection of simplistic technology solutions to meeting the diverse financial needs of the world’s poor, while strongly supporting technology solutions that involve human networks. The importance of human networks in making technology useful to the poor is something I delved into in my post on the Financial Inclusion 2020 conference held last October on the Center for Financial Inclusion blog. That conference, incidentally, is where I first heard of the book “Scarcity,” as one of its co-authors gave a very compelling presentation there.

The importance of savings: The wisdom of the recent emphasis of microfinance professionals on promoting savings is confirmed by behavioral economics. This is because accumulating liquid assets tends to reduce or eliminate the harmful impact of tunneling by creating what the authors term “slack.” However, it also suggests to me that compulsory savings, which recently has been deemphasized and dropped by many organizations, may deserve another look. (Or at least opt-out savings plans, where clients are required to save unless they choose not to participate.) This is because people exhibiting tunneling behaviors will tend to neglect savings unless it is automatic, which partially explains the phenomenon of dormant savings accounts littering the developing world.

Flexible Loans and Consumption Loans: Easy access to very small, short-term loans from microfinance institutions (MFIs) is another potential source of slack – they mitigate against the tendency of poor people to decapitalize their businesses or take very high interest informal loans to meet immediate needs, or deal with “shocks.” At one point the authors reflect on some of their own research in India and state: “[W]e were amazed by the high demand for loans that averaged less than $10. The product does not help build wealth [and] on the surface it does not look like the kind of sum that can transform a life. Yet it might do just that.”

The authors correctly note that loans can be a tool for reinforcing the negative impacts of tunneling, or for alleviating them, depending on the context and especially how they relate to magnifying or reducing the negative impacts of scarcity and its taxation on bandwidth. This insight forces us to think differently about the stale and perhaps wrongheaded critiques of microloans centered around how some of the funds officially sanctioned for starting or expanding small businesses are in fact used for other purposes, usually defined as “consumption.” (In fact, some studies that have found that up to 40 percent of the funds clients receive in the form of microloans are not used for investment in business – statistics that are sometimes used to undermine the case for microcredit.) This critique loses some of its power when viewed through the behavioral economics lens. If microloan proceeds not directly invested in a business are used to provide helpful “slack,” reduce scarcity (and the negative behaviors it leads to), and/or pay off high-interest debts accumulated in the past, they may be as high-impact as the parts of the loans invested in income-generating ventures. 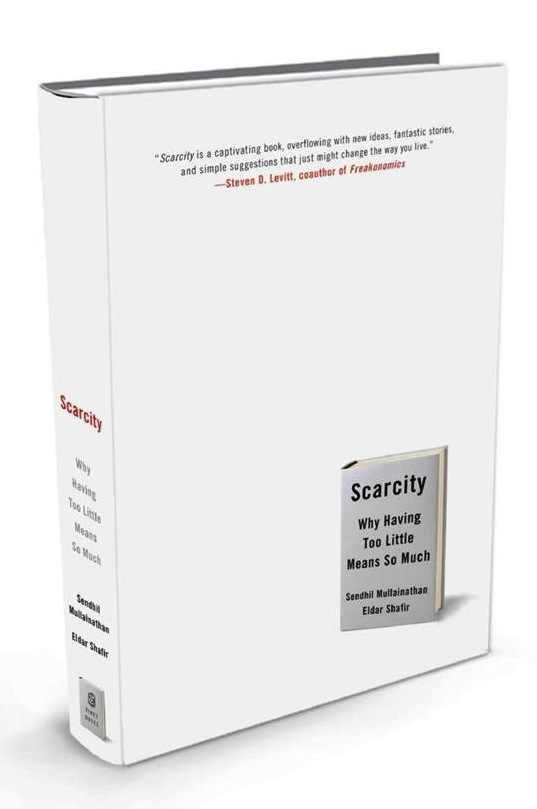 Microinsurance: The potentially critical role of well-designed micro-insurance products is reinforced, as they help people deal with shocks and as such, provide slack, and thereby reduce the need for periodic tunneling. However, getting people operating under scarcity to pay attention to and then agree to pay for long-term risk management is clearly more of a challenge than most have previously understood. Fortunately, behavioral economics gives us some tools to confront that challenge. It suggests that building insurance into loan contracts – something that is fairly widely practiced even though it is increasingly discouraged – deserves another look.

Over-indebtedness: Behavioral economics analysis of scarcity explains and warns against the insidiousness of over-indebtedness, which is a logical consequence of scarcity (particularly for the poorest), especially when access to loans is relatively easy. It also explains why many MFI clients continue to borrow from moneylenders. This in turn reinforces the importance of credit bureaus, self-restraint by MFIs in pushing loans beyond what can be usefully deployed by clients, and client protection principles. The magnitude of people’s tendency to focus on alleviating short-term scarcity (which is often through taking a loan regardless of the long-term consequences) suggests that these long-overdue measures may only prove to be partial solutions, especially for those suffering from the most acute scarcity. But clearly they move in the right direction.

The overall importance of microloans: The capacity of microloans to give poor people needed slack is directly related to their reliability. This affirms David Roodman’s point about the most important achievement of the microfinance movement being the delivery of loans on a mass scale in ways that are predictable. Reliability may even be more important than the cost of the loans, since even relatively high interest rates are likely to be much lower than the long-term costs of mortgaging one’s future by selling productive assets, neglecting children’s schooling, or buying medication recommended by one’s doctor – behaviors that are commonly exhibited by all people (rich or poor) who are tunneling.

But perhaps even more important, reliable and appropriately used financial services decrease the need for tunneling through providing slack. In other words, they make it easier to juggle (akin to suddenly having fewer balls in the air) from a cognitive perspective. They can also dampen other negative impacts of tunneling, such as the inability to control temptations or temper, to be pro-active in taking care of one’s health, or to remember to vote – behaviors that are consistent with well-being in the long term. But as we saw above, financial services that are provided irresponsibly, or even with insufficient attention to behavioral economics, can also aggravate and worsen these same conditions.

The Concept of the Rational Borrower: Behavioral economics tends to reinforce an important implication of an idea underpinning the approaches many microfinance practitioners take, the one that assumes that in most instances, “borrowers know best.” The implication of this assumption is that extensive training of clients is usually not cost-effective, and possibly not useful at all. But behavioral economics arrives at this conclusion for a different reason. The advocates of “borrower knows best” often claim that the poor are best suited to leverage their existing “survival skills” and those can be pathways out of poverty if complemented by responsive financial services. Behavioral economics’ explanation for the ineffectiveness of most efforts to train microfinance clients is that their experience of scarcity gives them limited bandwidth to absorb and apply new information. On the other hand, behavioral economics challenges another aspect of the “borrower knows best” school – the part that argues that the poor can properly weigh short and long-term considerations, since people who are tunneling often fail to do this.

Optimizing Staff Performance: In a section dealing with how to apply behavioral economics to organizations, the authors describe and explain why workers, in many contexts, get more done in 40 hours a week than in 60. Basically, “working overtime” can pay short-term productivity dividends, but those dividends are usually short-lived. The cumulative impact on workers’ mental bandwidth is one way of explaining why this is so. For microfinance managers, the potential negative impacts of pushing field staff to consistently reach aggressive goals on long-term productivity and even ethical behavior are made manifest. And like many of the observed impacts in behavioral economics, it is not their existence but their magnitude which is most striking and unexpected. In addition, taking into account staff members’ “cognitive load” and adjusting their responsibilities accordingly makes good sense. For example, giving staff assigned to troubled, remote or otherwise difficult branches additional annual leave or smaller caseloads would be a wise human resource policy.

Enhancing Social Performance: In an important tangent that relates to the larger question of how scarcity and abundance relate to each other, the authors attempt to partially explain the financial crisis of 2008. They hypothesize that in the lead-up to the crisis, financial institutions were exhibiting the behavior of “tunneling” with an exaggerated focus on short-term profits. They argue that the growing importance of “chief risk officers” in financial institutions is a way to “penetrate the tunnel” and as such, better balance short and long-term considerations. In the microfinance context, some loan officers and their managers have shown a tendency to tunnel by focusing inordinately on short-term financial profits, to the detriment of long-term client relationships, consumer protection, honest and ethical behavior by staff, and organizational social performance (also known as client advancement). Having empowered “social performance” and “client protection” officers is one way to create a healthier balance, as is generating (and, importantly, making visible) real-time data on social performance through use of tools like the Progress out of Poverty Index – in the parlance of the book, they also have the potential to “get inside the tunnel” that the organization and its staff tend to inhabit.