The IT Revolution in Health Care: Jeffrey Sachs’ keynote at the Global Health & Innovation Conference

A lot has changed in global health in the past 10 years, but one thing has stayed the same: each year, in New Haven, Connecticut, Unite for Sight has organized the Global Health and Innovation Conference. The first conference, held in 2004, was a modest event, with about 100 attendees. The tenth, held this weekend, was significantly bigger, with around 2,200 attendees and about 300 presentations. The long list of presenters featured academics, entrepreneurs, health professionals and activists – including some global health and development “rock stars” like Jeffrey Sachs and Al Sommer.

Many participants seemed to be regulars at the event. Sarang Samal, the founder of Kalinga Eye Hospital in India, told me this was his eighth year presenting at the conference, and other presenters and participants shared similar experiences. But this was my first time, so here are a few first impressions:

There was so much going on that it was impossible to take in more than a fraction of the presentations. Fortunately, Unite for Sight will (eventually) post videos of their keynote speakers and other selected sessions. In the meantime, I’ll be posting a few brief rundowns of the keynotes I attended, along with some videos.

Let’s start with probably the biggest name at the conference, Jeffrey Sachs, Director of the Earth Institute at Columbia University, whose presentation was called “Information Technology and the Revolution in Health Care.”

At first, Sachs’ speech seemed more suited to a tech conference than a global health event. He shared graphs and statistics that showed how far information technology has advanced in recent decades – a few highlights:

Then he segued into the fact that expanding cellphone and Internet access have brought this technology to rural BoP communities, and the reasoning behind his focus on IT became clear. With 800 million mobile subscribers in sub-Saharan Africa alone, Sachs views mobile phone access as “the most transformative single event in development work of our generation.” In public health, it has revolutionized data and systems analysis to the extent that “Africa will probably have electronic medical records before the U.S.”

Here are a few of the mobile phone/broadband applications occurring now that Sachs believes will come to fruition in the coming years: 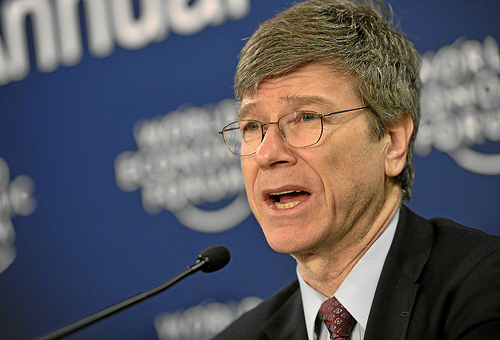 Part of our job in global health and development, Sachs said, is to catch up to what’s possible technologically, as we move through the remaining 1000 days of the U.N.’s Millenium Development Goals (MDGs). To that end, he focused on the potential of community health workers, connected to other health professionals through mobile phones, which he views as the single most important lever for progressing toward the MDGs by 2015.

With mobile technology, he believes that integrated systems management is now within reach for the health sector. Ministers of health and community health organizers should soon have real-time information on facilities, vital events, epidemic surveillance, and community health workers’ individual performance, integrated into a single support system. With up-to-the-minute data now possible for births, deaths, and other health events everywhere, better management will be possible. And the mass availability of online training and education will transform public health, enabling school-to-school and peer-to-peer contact for advising, mentoring and partnering effectively.

In light of this new technology, and the continued economic development of Africa, Sachs believes that the UN’s post-2015 agenda should include goals that are even more ambitious than the MDGs. Some possibilities: the end of extreme poverty and the effective elimination of preventable disease by 2030. He added that UN Secretary General Ban Ki-moon has asked him to help set up a global network, largely university-based, to support local solutions and make local processes and breakthroughs replicable around the world. He ended with a call to action: “We have phenomenal tools that we never had before, let’s use them and get the job done.”

I’ll be posting more coverage of the conference keynotes and selected sessions in the coming days, along with videos of presentations and one-on-one interviews with presenters. In the meantime, here’s a great intro to the conference by one of the most gifted public speakers I’ve ever seen.

“The Art of the Patient Narrative: Using Narrative to Enhance Diagnosis and Transform International Policy,” by Leana Wen