A little over a year ago, Rwandan Christine Murebwayire graduated from the Goldman Sachs 10,000 Women program. A widow and mother of four with one adopted child, Christine runs a banana wine and juice-manufacturing co-op. Over the course of her six-month training, Christine and fellow classmates created detailed and actionable business plans, and participated in a range of follow-up support services, including one-on-one mentoring and advising on accessing capital.

Since graduating from the program in February 2009 (a total 119 fellow women entrepreneurs have graduated since its September 2008 launch in Rwanda), Christine’s business has increased profits, expanded into Tanzania and soon plans to venture into the Kenyan market. She’s gone on to negotiate with the government to offer training and seeds to local banana farmers to assist in modernized farming. Further, Christine has provided technical training on banana fiber processing for several women in her community. In turn, many of these women have set up their own businesses, adding Christine as a client. As if that weren’t enough, Christine also offers school loans to local banana farmers when they are unable to pay for their children’s school fees – loans that are paid back in bananas the following harvest season.

“The 10,000 Women program not only helped me improve my business, but empowered me to help my community,” Christine told Sharolyn Arnett, Program Manager-Executive Education, at the William Davidson Institute. WDI and the School of Finance and Banking implement the program in Rwanda.

This is just one of a growing number of success stories for the project, launched in March of 2008 by Goldman Sachs. By the end of 2010, 3,000 women will have enrolled and/or graduated from the 10,000 Women project. The effort has taken root in 22 countries and has involved more than 70 academic or nonprofit organizations to assist with administering training and wrap-around services to help graduates apply what they’ve learned toward growing or starting businesses.

The goal of the five-year effort is to provide 10,000 underserved female SME managers and/or aspiring entrepreneurs across the world with management training, know-how and access to capital The initiative was founded upon the extensive research produced by the World Bank, World Economic Forum, Goldman Sachs’ own Global Market Institute, and others, that document the host of economic and social benefits that result from investing in women.

In speaking about this ’multiplier effect,’ Ngozi Okonjo-Iweala, Managing Director at The World Bank, has said: “Gender equality is smart economics because investing in women promotes economic growth as well as social progress. Developing countries with higher gender equality tend to have lower poverty rates, and better progress on health, nutritional status and girls’ education.”

And Goldman Sachs 10,000 Women is seeing these results. Preliminary data shows that 70% of graduates are reporting business growth and 50% have hired additional employee(s), according to the Goldman Sachs Foundation. As for the more implicit, ripple effect of the program, on average, each woman who enrolls goes on to mentor 14 other women. It’s a significant number, especially considering that each class is compromised of 25-30 women. Most local 10,000 Women programs involve 150 hours of curricula concentrated over one month or extended for up to six months, especially for women with families.

It goes without saying that many of the participating women are not only going against a societal grain by participating in business. But in some cases, they’re risking more than just cultural mores. Creating a network of both casual connections via social networks as well as through formal chapters of 10,000 Women has been a welcome impact of the program, and likely a sustaining force behind it. One notable example is in Afghanistan, where graduates created their own 10,000 Women Alumni Association to reach out other women and to lobby the government on business inclusivity. In India, a 10,000 Women cohort formed a nonprofit to formally pass on what they’ve learned. Relationships among women have been further solidified through case writing competitions within cohorts. 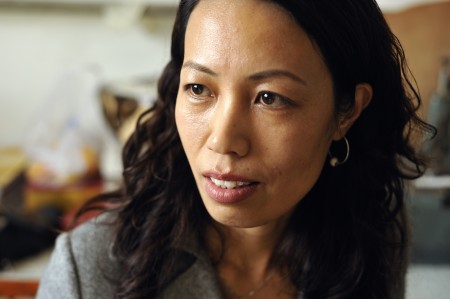 (Above: 10,000 Women graduate Liu Xia of Beijing, China. She’s the owner of Craftmen’s Shoe Bar, which makes high-quality, customized, made-to-measure leather products. “Almost everyday I can see different changes. There are differences in my staff, myself, my products and service as well as the feedback from customers. I will try my best to bring my enterprise to the next level soon.” In order to meet the needs of future development, she hired and trained five designers and 11 new craftsmen. Image Courtesy of Goldman Sachs ).

The initiative has received tremendous attention from world leaders. U.S. Secretary of State Hillary Clinton recently met 10,000 Women alumni before several were honored at an event last month in Washington, D.C. Additionally, Liberian President Ellen Johnson Sirleaf delivered the keynote speech to graduates earlier this month and the Rwandan Minister of Commerce and Trade attended graduation ceremonies there in July.

In addition to the investments and support, Goldman Sachs plans to continue to monitor the graduates’ businesses across several metrics, including jobs created, inventory and revenues for up to 24 months after graduation.

Additionally, we hope to post more updates from graduates and students as we hear of them. (So please feel free to pass them along). The video below features the story of Emelienne Nyirumana, the Founder and Treasurer of Cocoki, who was accepted into the 10,000 Women program this summer. Cocoki is a co-op partner with Indego Africa, which provides training in accounting, computer literacy, and English to handicraft cooperatives in Rwanda.