The Power of Exposure: The Influence of Role Models and Design on Aspirations

It is human nature to observe and compare ourselves to others. Our future goals broaden as we meet successful people with similar characteristics and past experiences. Exposure to role models and institutions help us imagine how our life could be different.

But for a large portion of the BoP, such mentors do not exist. As a result, they aren’t aware of a different way of life and thus feel that their lives will be a mirror image of their parents’ lives – often repeating the cycle of poverty. Even if they have the ambition to change their circumstances, they don’t have the knowledge of how to do so. This is why exposure to successful people who we can relate to can be very powerful.

People also can change their circumstances through exposure to improved living environments, thereby creating change at the community level. The designer Giancarlo Mazzanti said it well: “The first step toward quality is the dignity of the space, and its way of showing another path.”

As a mayor of Medellín, Colombia, Sergio Fajardo wanted to provide young Colombians alternatives to crime and violence, and to change the mindset that they can’t aspire to anything better. In particular he chose to do this by creating aesthetically inspiring public buildings and spaces in poor neighborhoods. Fajardo told Newsweek in 2007: “People who say that a beautiful building doesn’t improve education don’t understand something critical. The first step toward quality education is the quality of the space. When the poorest kid in Medellín arrives in the best classroom in the city, there is a powerful message of social inclusion.”

Fajardo began to invest in poor neighborhoods by building state-of-the-art public spaces and libraries. He focused on areas with high levels of violence that scored low on various human development indices. They built five “library parks,” which included public gathering space, a library, community center and auditorium with computer stations, reading rooms and spaces for local organizations. Mazzanti designed one of the libraries that sits on a hilltop and offers panoramic views of the city (Pictured above left and below right. Flickr credit here and here). As part of his work, Fajardo also was behind the Jardin Botánico-Orquideorama, a 42,200-square-foot canopy of wood-framed hexagons housing an orchid garden. 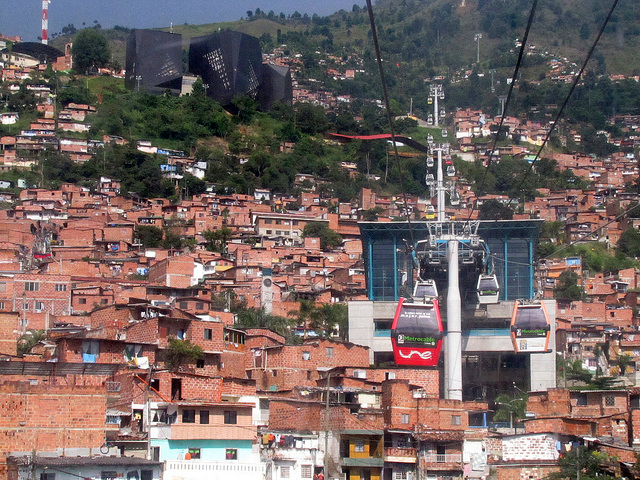 In a 2010 interview, shortly after Fajardo lost an election for Colombia’s highest office, he said :“we sought urban transformation, by using architecture as a social and political vehicle to achieve positive change. So we came to those neighborhoods where all hope had been lost, and it was there where we decided to build the most beautiful buildings. And why did we want to have these beautiful public works in the poorest neighborhoods? Because we reject the paradigm that, when it comes to poor people, any little thing will do—that they will be happy just to get anything at all.”

People thought he was crazy for investing in poor neighborhoods rather than rich ones. However, over time, observers noted that residents living near the Fajardo structures took better care of their homes, enhancing them with new additions and fresh coats of paint. Exposure to Fajardo’s work was enough for many neighboring residents to rethink how they lived.

If exposure to role models and dignified spaces can play such a powerful role in people’s lives in the physical world, the potential for ICT to provide similar types of experiences in the virtual world seems boundless. Given that a large portion of the BoP have cell phones, what type of role do you think ICT can have in changing the BoP’s futures by exposing them to new information, ideas and possibilities?