What the SOCCKET is (And What it is Not)

It looks like the prototype do-gooder-gimmick – a football (soccer ball) that produces and stores electricity, which can power a solar lantern at night. Each ball financed by Western backers, they are donated in developing countries. I had the chance to kick it at the Rio Summit – it’s a fun concept, but does it hold up to its promise?

At the Rio+20 conference and the gazillion side-events, people spent a lot of time in dimly-lit, strongly air-conditioned conference rooms at lofty panel discussions. What a relief to get out in the sun, take a look at the sea on the other side of the river, and see some people kicking a soccer ball on the green grass in front of the hotel tower.

Their ball is not any ball, but holds a tangible promise: Provide hours and days of fun play to children in the developing world, and help to plug the persistent “power gap.” But will it work?

The SOCCKET is an interesting piece of technology. It looks like a soccer ball, you can play soccer with it, and if you do, it stores some of the energy that keeps it flying and bouncing in a battery inside. This one can be connected to an external lighting source, say, an LED light or cell phone in need of a recharge.

How is it all financed? On the of Uncharted Play website, the company behind the product, people can donate a ball, for $60 USD a piece, which is then sent to a child in a developing country via a variety of partner organisations. 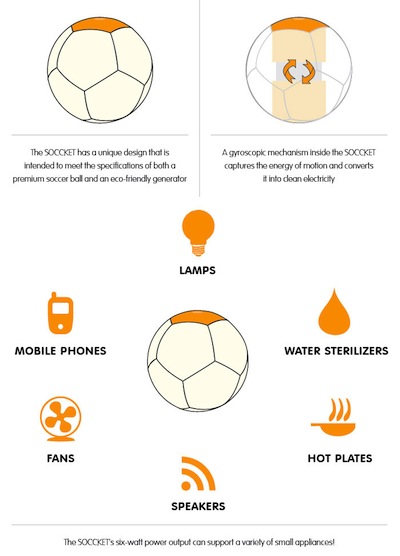 First, the ball is fun, and the organization tells beautiful stories about the way local kids in developing countries live it, and love to play around with it.

Second, it helps to replace kerosene with a clean, reliable light source (via LED). As the currently wide-spread kerosene used for lighting causes severe respiratory problems, especially among children, so the SOCCKET definitely does make contribution here.

Third, the SOCCKET team mobilizes an interesting funding source – western citizens who feel thrilled and inspired by the unusual product and combination, and open their wallets that might otherwise have stayed shut (or, would have been spent on buying an gimmick for their already overcrowded homes).

Last, they have been able to get BIG attention – including a sponsored commercial, reports in major news outlets, and even an endorsement of world-saving-figurehead Bill Clinton. That not only brings in funding for distributing SOCCKETs – but also draws attention to the cause of bringing electricity and clean light to the billions so far excluded.

(Left: A description of how the SOCCKET works. Image credit: Uncharted Play).

Especially a project with such a critical mission, and relying on the trust of consumers donating, merits strong diligence and discussion. So, here a list of potential cons.

First, the company’s funding source is a key restriction, and some might argue that the problem’s size lies beyond a one-on-one funding strategy. Even with the significant outreach and exposure that the project has, it will probably never make the “big dent” that other, “scalable” interventions could have, like those relying on poor consumers actually paying for a lighting product.

Second, while the ball has an astonishing play-to-light ratio, lighting a whole village (or, even a bunch of households) would require a group of children playing for an extended amount of time, and regularly swapping balls once they’re sufficiently charged. As that is not a very likely scenario (on a daily basis), it is another limiting factor.

Third, and related to that, is the question of whether the funds are most efficiently applied to solve the problem at hand – lacking access to lighting – by the current product. It may actually be a quite expensive intervention as compared to other programmes giving a better “bang for the buck.” Especially with NGOs competing for donor money, that becomes an issue, and the “fancy” SOCCKET might crowd out quieter, less appealing, but more impactful interventions (like, deworming medicine or rehydration kits).

Fourth, the project plays on the hero theme of development: Ivy League students invent a smart product “for” (and partly with) the poor, funded by donations from rich consumers, while the poor remain in the role of the thankful receiver. The “grant ethic” in the developing world of being entitled to “free stuff” has done lots of damage – why should a household pay for a solar lantern, when the one next door had receive a SOCCKET for free? This could make the life for market-based approaches more difficult.

Fifth, there is more to “access to energy” than just lighting. While the SOCCKET may fulfil “small” energy needs, the really life-changing – cooking water, productive uses in agriculture like pumping water or processing produce, transportation – are out of reach for the SOCCKET . While a solution does not need to address all challenges out there, other energy solutions like solar home systems might be more “scalable.”

Last, a practical problem could be the waste – what happens when the ball is damaged or defective? Will it be properly deposed – not like a soccer ball that will rot away on its own, but like a potentially hazardous piece of e-waste?

And the bottom line?

The team says, they are working on more “FUNctional” products that hopefully address some of the criticism above. Also, some of the problems might be addressed by working with solid local partners that community the products benefits and limits, and avoid fostering a grant mentality through it.

Admittedly – the idea is cool and fun. Plus, the team has set an amazing example what is possible by thinking creatively and bold, and moving fast. Overall, the story is thus definitely an eye-opener – as well as a good starting point for discussing development projects, and how to get out the most impact from them. Let’s get the discussion started!