The True Measure of Land’s Value

As a trained agriculturist, I have always measured the worth of land in a very scientific manner. I consider the climate, water resources and soil. Weighing this all in my mind’s eye, I visualize the land’s productive value and measure it in terms of kilogram of produce per hectare.

I now recognize that this common approach fails to consider one of the most important factors related to land: who owns the land.

This became clear to me in 2004, when I was working as a development professional in a faraway village in Hazaribagh district of Jharkhand, East India. The goal of my project in the village of Gotia was working to introduce a high-yielding variety of pigeon pea and encourage villagers to plant it on fallow land to improve their income.

When I arrived and explained my plans to villagers, women were eager to try. The men said it was too risky and too much additional work and announced they would not contribute their labor.

They stuck to their words. There was no sight of men in the field throughout the cultivation season.

Women procured a tractor to do the plowing; 18 women from the village sowed the seeds and did the weeding. This was in addition to their regular work on the family’s rice field, cooking, fetching water and childcare.

Among the 18 women was Shanti Devi, who participated but she participated without her husband’s consent. I saw how difficult it was for her to manage all of her responsibilities simultaneously. She had five children, including an infant and a toddler. One day I asked her why she did not quit.

She told me, “All other work is my responsibility towards my family, but this work I am doing for myself. The extra income I will get from this land, I will use to buy a necklace for myself. I had hoped to buy one for the last few years. Quitting the plan means quitting my dream.”

Her strong conviction about her dream persuaded me and lessened my guilt about increasing the women’s workload.

But then, the most remarkable change occurred. As the fruits of the women’s labor became apparent for all to see, I noticed men suddenly interested in our project. They were asking about possible diseases, post-harvest operations and plans for bringing the produce to market.

As a naïve and young development worker, I was very happy with this change. I was looking at this as my success; at last, I had convinced the entire village about the initiative’s merits. But when it came to taking the produce to market, the men came forward and the women took a step back.

A few days later, very excitedly I asked Devi to show me her necklace. With a blank face, she said she did not buy it. After keeping money for household expenditures and children’s needs, the remainder was spent to buy a radio and a bicycle for her husband. 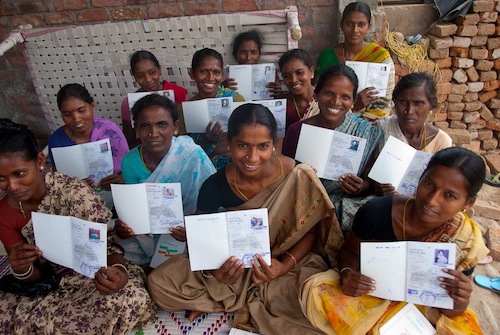 (Women who received title to land as a result of a partnership between the government of India and Landesa. Photo courtesy of Landesa and Deborah Espinosa.)

I was shocked and bewildered. While I understood her interest in using the money to pay household expenditures, I was disturbed by the fact that his interests were prioritized over hers. Buying jewelry, in our culture, makes sense, because jewelry is an asset and can be resold easily when the money is needed. It is used widely in areas where there are no banks.

When I asked her why she neglected her own choice, as it was her hard-earned money, she very quietly replied: “I was the one who worked on the crop, but land was his.”

By providing an example from my world she tried to make me understand hers, “It is like a nanny taking care of a baby. The parents might be negligent and you as a nanny may take the utmost care of the baby and treat it as if it were your own. But at the end of the day, it is not your baby. You are just a caretaker.”

Her words revealed a very different aspect of land to me. Land is not only a means to produce food. Its value cannot only be measured in kilos per hectare. It is a significant factor in power relations within a family, a community, a society.

Devi taught me an important lesson: In working with women to increase family income, we might increase household income and help the family out of the poverty trap, but women, the primary stakeholders of the initiative, will still be trapped in their underprivileged status within the family and the society.

Today, I still feel guilt for increasing the workload of Shanti Devi. But I remain determined to enable her to buy that necklace. The key to achieving true empowerment for women is recognizing the real value of land – economic and social – and the power secure rights to land have to transform an individual, a family and a community.

Sabita Parida is a program coordinator with Oxfam, India and just completed the Visiting Professionals Program at Landesa, a global development non-profit that works to secure land rights for the world’s poor women and men. Follow @Landesa_Global. The blog represents the author’s personal views.