There is a Fortune at the BoP: So why aren’t large corporations capturing it?

It is no secret that in the field of inclusive business, we have placed great expectations on the potential of large companies to alleviate poverty in Latin America. In fact, the agenda of inclusive business began as a call for large corporations to fight global poverty. The first generation of writings on the “bottom of the pyramid” were based on the premise that large corporations are better positioned to address the market, to have the financial muscle, distribution channels, and technological and managerial sophistication to meet the challenge of serving the poor. That premise remains valid as multilateral agencies, NGOs and development organizations continue to focus much of their efforts in that direction. However, the experience of recent years shows that in practice, large corporations have not always responded enthusiastically to the challenge of serving the BOP profitably.

Consider the experience of the program “Development of New Market Opportunities at the Bottom of the Economic Pyramid,” released in 2006 by the IDB’s Multilateral Investment Fund and CESPEDES (The Commission on Private Sector Studies for Sustainable Development) the Mexican chapter of the WBCSD. This call was presented as a “perfect storm” of favorable factors. Mexico has a sizable population of around 112 million people, with a substantial portion (44.2 percent) living below the poverty line (Consejo Nacional de Evaluación de la Política de Desarrollo Social, 2008). This generates the necessary market incentive to investigate commercial solutions to the unmet needs of this population mass. Second, this is a country with a significant level of relative development, a member of the OECD and a vibrant private sector. Its large corporations have endogenous capacity for R&D, which can not be said of the private sector in many Latin American countries. It is no coincidence that several of the most talked about BoP initiatives have occurred precisely in Mexico. This combination of poverty, business volume and sophistication, which can also be found in countries like India or Brazil, would seem to position this nation as a suitable laboratory for innovation in the development of initiatives for the BOP.

Third, the initiative had a major supporting ecosystem, backed by highly credible organizations, such as the Inter-American Development Bank or CESPEDES, along with an advisory board loaded with business experience, capacity for regulatory influence, and intellectual sophistication. Finally, the participating companies had the incentive of nontrivial economic support to achieve the objectives of the program: $200,000 (non-refundable).

After six months (November 2006 to April 2007) of intensive advocacy work in the major cities (Mexico City, Monterrey and Guadalajara), which included awareness sessions and training workshops (general and targeted), not a single project was generated. At each successive stage the response of the large corporations dwindled until the program ended without a single approved project. Faced with this disappointing reality, program organizers rearranged the call, to aim not only at large corporations, but also SMEs and NGOs. The participation of large corporations, thought of as the main protagonist of the program, was very different than planned. Even after the adjustment in the call, only about a third of the proposals received came from large corporations, and of these only half ended up being implemented. 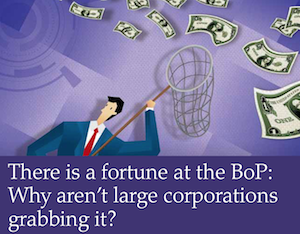 In short, despite the “perfect storm” of favorable factors, large corporations’ participation was kept to a minimum (12.5 percent of projects). It was paradoxical for the organizers that Mexico’s large corporations, which usually respond to the altruistic call of social responsibility, were not seduced by the invitation to capture a large market opportunity.

What barriers hinder the involvement of large corporations with the low-income segment? Considering the importance of the question, it is surprising how little attention it spurred in the literature on the subject. We recently published an article in INCAE Business Review with the same title as this post. It summarizes the findings of a study that sought to answer this question and explain the paradox. Download the study in English here or in Spanish here.

Tags
Base of the Pyramid, multinational corporation, research