Getting Back to the ‘Heyday’ for Vaccines: PATH’s Batson on how ‘really smart innovations’ are bending the global health curve

Amie Batson, chief strategy officer at PATH, believes the best way to turn innovation into impact in global health is to use a disciplined public-private approach.

Why? Because she’s seen it work.

“We focus on the middle of the value chain,” Batson said, “which is that kind of hard slog of riding it through all the stages necessary to get a product into reality. And so PATH is all about partnerships with others.

“At the end of the day, you can have a great idea, but if it’s not reaching the people who need it, it’s useless.”

A key to driving technical and social innovations in global health, she said, is inclusive financing.

She described how the vaccine market has evolved over the past 25 years and laid the groundwork for many of the innovations and partnerships occurring today. 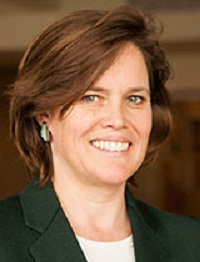 After a massive push for global immunization in the ’80s, countries had 80 percent coverage, vaccines cost pennies per dose and “no one gave them much thought.” But problems emerged. Some countries had laws that required the receipt of vaccines before payment, and UNICEF required payment before shipping vaccines. Thus, the Vaccine Independence Initiative was developed in 1991 to create a buffer between procurement and financing, through a $10 million revolving fund, and it still exists today.

At about this same time, the cost of vaccines started rising. “Suddenly, the cost of a vaccine went up by 50 percent. That means it went from 4 cents per dose to 6 cents per dose,” Batson said. “There was an outrage in the immunization community. People said the manufacturers were taking advantage of UNICEF. How dare they increase the cost of the vaccines by 2 cents?”

The manufacturers claimed they were giving UNICEF the absolute lowest price per dose that they could, so people started studying the economies of the vaccine market. That eventually led to a growing understanding that the market had to work for industry as well as the public sector. “Slowly, a vaccine strategy evolved,” Batson said.

A fundamental gap was acknowledged: “Big, rich countries get their needs met,” Batson said. “Small, poor countries don’t.” That means vaccines don’t always reach the children who need them in developing countries, and millions die as a result. The solution? A differentiated market and tiered pricing.

GAVI was established in the late ’90s as a pooled financing mechanism for underutilized and new vaccines, funded in part with a “game-changing” $750 million from the Bill & Melinda Gates Foundation.

It started with the understanding that the most deadly diseases in the developing world can or could be prevented. For example, pneumonia kills more children than any other disease on the planet, and while pneumococcal vaccines exist, they’re out of reach in some low-income countries. So the GAVI Alliance launched an Advance Market Commitment in 2009, a complicated public-private partnership to guarantee a market for pneumococcal vaccines.

By pulling together industry, donors and developing countries – the supply agreement included an AMC subsidy, GAVI funding and a co-pay by involved countries – it extracted much of the risk for the private sector. The idea is to get the vaccine in the hands of those who need it most, not just those who can afford it. The concept and model set a precedent in global health.

The focus should be on similar creativity going forward, Batson said. “If we really want to bend the curve,” she said, “that’s only going to come from the really smart innovations.”

And countries must be seen as core partners. “There was a lot of focus on global, but there’s this whole new understanding around development. We went from what we did to countries, to what we did for countries, to where we are today, which is what are you doing with countries.”

Foundations and governments today are “more sensitive to the transaction costs of each solution. … We did have a heyday in the vaccine world, and it’s going to be tougher now. The economic situation has changed.”

PATH is trying to be less reactive to what donors are saying, she said, and more proactive, identifying gaps in global health and shaping the thinking of donors.

“The world changes and new lenses can be put against the same problems and solutions.”