Tough Stuff Fortifying the Base

A teacher purchases uses a solar panel to power an accompanying lantern, keeping her school illuminated. One of her students listens to an educational program (or maybe the occasional football game) on a radio powered by the household solar panel. His mother texts her employees via a mobile phone, electrified earlier in the day from the same panel.

This electrified ecosystem is the vision of Tough Stuff, which is working to bring low-cost energy to the BoP (and I don’t just say that because it was recently named among the winners of the 2010 Tech Awards, which will honor the company and others on Nov. 6).

Based in Mauritius, Africa, Tough Stuff has the familiar, loftier aim to alleviate poverty, enable education, and enhance health, safety and quality of life by selling solar-powered products. Even before teaming up together to build a series of products, Tough Stuff’s founders, Adriaan Mol and Andrew Tanswell, each developed the belief that lifting people out of poverty is not achieved by the traditional development aid approach, rather by enterprise solutions. Creating wealth, or helping decrease expenditures, are the only long-lasting ways to help the impoverished, say the partners. This founding philosophy quickly formed the base of the founders’ mission.

Because Tough Stuff furnishes a devastatingly low-income population, cost management is paramount. No Tough Stuff product exceeds US$10. While the firm is not the only enterprise to sell solar powered lanterns and charging strips, it is one of the few that provides a modular option in which consumers can purchase detachable components of the technology, making it more affordable. The complete menu of products includes solar panels, LED lamps, cell phone connectors, radio connectors, and rechargeable battery packs. 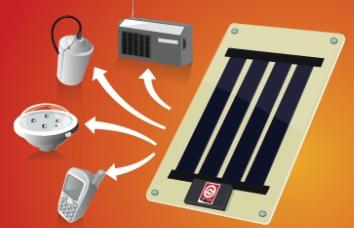 Tanswell notes that because most energy dollars are not just spent on lighting, but on charging cell phones and listening to the radio, the company’s products would have to accomplish more than just extinguishing kerosene costs, in order to lessen poverty. If Tough Stuff had only cut kerosene from a consumer’s shopping list, there would still be cell phone expenses and radio expenses eating away at their savings. Modularity fosters individuality by allowing a consumer to select only the appliances needed to feed his/her particular energy appetite, while trimming the fat on less crucial elements. Of course, this process conserves energy usage as well, by eliminating products and energy consumption that one does not find necessary to their daily functions.

Despite the apparent benefits of customizable solar powered products, how does Tough Stuff get consumers to foot the bill? The reality is that those who live off the grid typically live in rural areas, and are subsequently even poorer than the typical poverty common to the developing world. In these communities, perks are certainly of secondary concern to feasibility. So, how does Tough Stuff make the sale?

First, according to the company, products can pay for themselves in as quickly as two months due to the steep cost of kerosene and other less desirable alternatives. (These savings total approximately US$98 dollars of savings per year, not counting the hours of productivity gained by the owner.) For a product that can live anywhere from five to ten years, that is a pretty enticing bargain. Central in convincing consumers to dedicate a large percentage of their earnings on one small household item is delivering a durable product in return. If a Tough Stuff solar panel falls off the roof, it won’t break, if you drop the phone charger, it will survive, and if you step on the radio, it will still crank out the tunes and the news as promised. Although this sounds like a line from a practiced car salesman, in the instance of Tough Stuff, quality is more than just a perk — it’s a requirement, as indicated by the company name.

Design is another factor that influences purchases in the developing world, the same way that it influences purchases in the West. Attention to small details, such as ensuring the solar lamp looks like a conventional lamp that anyone on the street would be able to recognize, is crucial to its receptivity. Similarly, the ability to touch and feel a product increases the chances of a purchase.

The third way in which the Tough Stuff model jumps the poverty hurdle is by allowing consumers to rent products instead of laying out the full funds in one lump sum. Business in a Box, as it is called, not only lessens immediate expenditures, it also increases wealth by creating a business out of the rental service. After being trained in operating and installing the solar products, local entrepreneurs set off to earn their income in rentals. One such entrepreneur quickly earned Tough Stuff fame by identifying a need and willingness for parents who would rent lamps for their schoolchildren to facilitate their studies. What began as 30 lamps soon became a rental business of 150 lamps.

For Tough Stuff’s founders, solutions for the BoP are relatively attainable for those who have the right amount of passion. As Tanswell puts it, Tough Stuff’s early accomplishments (and of course their subsequent success) weren’t “born out of a lab or a college MBA course, rather from entrepreneurial background.” When asked what he sees for Tough Stuff’s immediate and long term future, Tanswell remarked that he and his team “don’t plan on standing still.”