We Have Seen the Future, and It’s Universal: Single-payer systems being penciled onto BoP health care’s ‘blank slate’

Those who study trends at the bottom of the pyramid – and there were many of them at this week’s BoP Summit 2013, hosted by the William Davidson Institute – agree that the worldwide movement toward universal health coverage is gaining momentum.

Speaking at a Tuesday plenary on best practices, roadblocks and next steps in health care, panelist Gina Lagomarsino, managing director of Results for Development, said, “There’s a growing belief that systems that rely on direct, out-of-pocket expenditures lead to inequities. … They just don’t work very well.”

Rwanda is an example of the possibilities: More than 90 percent of its people have had coverage since 2010, according to another plenary panelist, John Simon, founding partner of Total Impact Advisors.

A pervasive problem, Lagomarsino said, is that individuals don’t tend to prioritize preventive care, even in developed countries. About 150 million people worldwide suffer financial catastrophe annually because of health care expenses, according to WHO, and another 100 million are pushed below the poverty line.

Technology could be part of the solution. Lagomarsino – who was introduced at the summit as an “innovation scout” – pointed to RSBY, a national health insurance program in India, which issues a cards providing cashless insurance for hospitalization. The card could conceivably be loaded with all sorts of options, not just for hospitalization.

“How do we shape this model in health financing so it creates opportunities for entrepreneurs?” she asked.

Simon is encouraged by systems that utilize payment with cards or even mobile phones – like M-Pesa, the cell-phone based money transfer service in parts of Africa – and “take advantage of the blank slate that exists in health care at the bottom of the pyramid.” 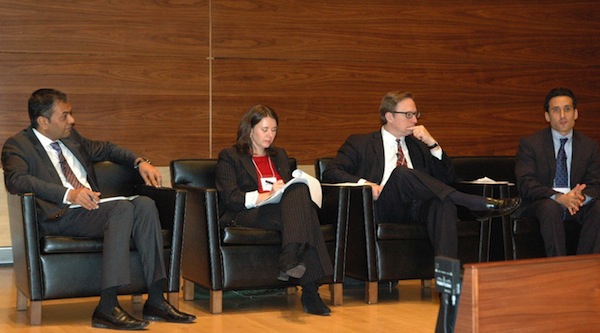 He believes universal health coverage in Africa comes with huge risks and opportunities. “The risk is recreating the system we have (in the U.S.),” he said. “The opportunity is to create systems responsive to patients.”

Lagomarsino said in an interview after the plenary that various countries are in the process of finding a system that fits their individual needs and capabilities: “The mechanisms different countries are using vary quite a bit.” But trends are developing. “Some governments are seeing their role as a financing role,” she said, “but not necessarily being the ones providing the care.”

Simon, in an email after the plenary, said, “Ultimately, governments will need to finance the coverage, but for now, several, including Rwanda, are getting a lot of help from donors. The share between public and private is still an open question in my mind.”

Lagomarsino also said that if a country is starting from scratch, “It could make sense to have a single-payer system. … We have a fragmented system in the U.S. and that’s caused a lot of problems.”

Simon, when asked to outline a system for a developing country, said circumstances vary but “some key principles should apply – the need for risk adjustment mechanisms, the need for sliding scale subsidies, cost containment measures, and the need for some burden sharing on the part of the patient at all levels, so that price signals can have some effect.”