This week our attention was torn from Kenya’s mobile money wars to a new domestic payments battle that, at this point, seems a bit unfair.

In one corner we have Apple, which (as you may have heard) has launched a mobile payment app called Apple Pay in the U.S. The product is drawing rave reviews for its simplicity and security – if not for its still-limited network of participating merchants. Riding the existing payment rails established by credit card companies and banks, the app lets iPhone 6 users register their credit cards on their phone, then pay through one of those cards by waving the phone near a Near Field Communications (NFC) reader in stores. In typical Apple style, within three days, the app had racked up over 1 million activations and become the top mobile wallet in the country.

Huddled in the other corner, a consortium of top retailers has aligned itself in opposition to Apple’s entry into the market – with two members, CVS and Rite-Aid, going so far as to block Apple Pay by disabling their stores’ existing NFC readers. The consortium, the Merchant Customer Exchange (MCX), includes the likes of Wal-Mart, 7-11 and other heavyweights, and it has drawn a line in the sand: retailers apparently will have to leave the group if they choose to accept Apple Pay. The reason for their resistance is that their own competing mobile payment app, CurrentC, is slated to launch early next year. Linked directly to customers’ bank accounts, CurrentC would allow merchants to sidestep the credit card companies – saving some of the roughly $66 billion in credit-card-related fees U.S. retailers pay each year.

Most MCX companies are unused to underdog status, but in spite of their prominence, CurrentC was virtually unknown prior to this week, when it found itself thrust into the public eye in the most embarrassing manner possible. After CVS and Rite-Aid made national headlines by raining on Apple’s parade, CurrentC and its reportedly clunky user experience quickly became the subject of mockery, and MCX companies soon found themselves threatened with boycotts. To make matters worse, the app was hit with a minor but untimely hack, which resulted in the theft of emails of people testing the app, which is still in the beta phase. Naturally, brutal online ridicule ensued.

Apple Pay has kindled a long-simmering dispute between merchants and credit card companies, and it’s too soon to say which side will win. But after a week of bad press, MCX was already making noises about possibly “pivoting to NFC” and even allowing Apple Pay in its members’ stores eventually. And regardless of who wins, the impact won’t be as revolutionary as mobile money’s emergence has been in BoP countries – after all, American consumers have had alternatives to cash for decades. So what significance, if any, does all this drama have for low-income people in the U.S. or the developing world? It’s hard to say, but here are some possibilities:

1. No impact: At prices that can exceed $1000, the iPhone 6 is unlikely to be a favorite of the low-income market. If Apple isn’t able to smooth things over with MCX and/or get a significant number of other major merchants on board, Apple Pay could remain a niche product whose utility is limited to saving hipsters approximately 3.5 seconds in the Whole Foods checkout line.

3. Direct impact: Recently Apple has made moves to target lower-income markets, including with last year’s poorly received iPhone 5c. But its success has been hampered by its unwillingness to significantly alter its business model of selling high-end electronics at a premium price – even the plastic-cased 5c was hardly cheap. Yet in his recent comments on the MCX dust-up, Apple CEO Tim Cook hinted that emerging markets are still on Apple’s radar screen: “We have a lot of merchants to sign up,” he said of Apple Pay. “We have a lot more banks to sign up. And we have the whole rest of the world.”

And Now for Something Completely Different

Though you wouldn’t guess it from U.S. tech media coverage, the week also featured plenty of non-Apple related news – but we’d like to shift the focus from Ebola and global conflict to look at something more positive.

In his new web publication www.OurWorldinData.org, Oxford Economist Max Roser dynamically presents social, economic and environmental history in compelling ways, debunking a lot of the pessimistic media coverage you hear these days. In many ways, our world is doing quite well (aside from the health of the planet and its animal inhabitants, as Business Insider points out).

“The evidence shows that we are becoming less violent and increasingly more tolerant, that we are leading healthier lives, are better fed, and that poverty around the world is declining rapidly. Taking these facts into account paints a very positive picture of how the world is changing,” says Roser, a James Martin Fellow researching income inequality and inclusive growth at the Institute for New Economic Thinking,

From our vantage point, the sharp declines in extreme poverty are what jump off the data-filled pages. A few screen shots from the analysis: 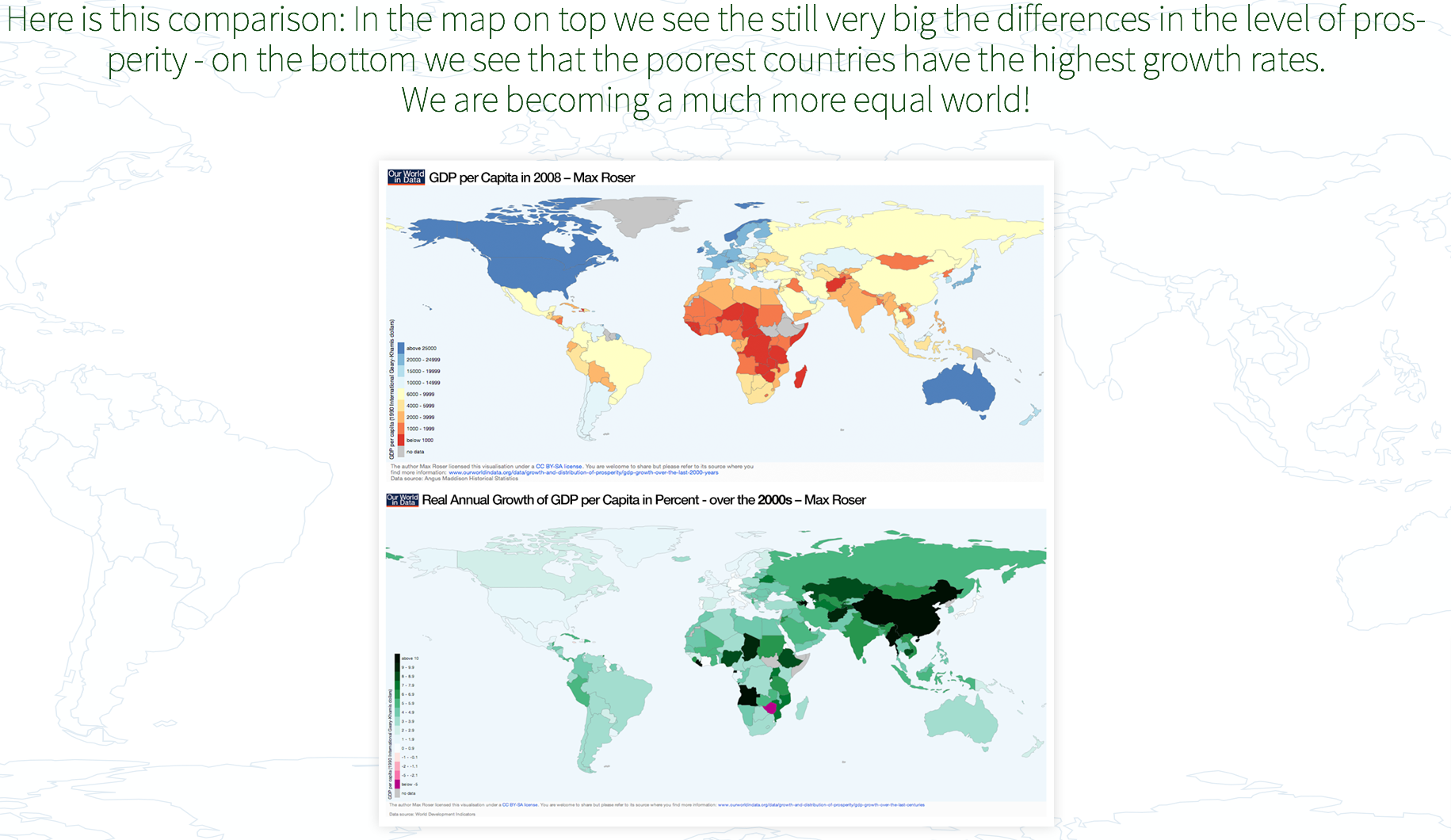 Roser’s data is further evidence of what many in global development and business already know. Even so, we encourage you to check out his complete presentation(s), especially if you want a break from all the talk of war and disease this weekend.

Red Flags: Over-indebtedness is the yang to microcredit’s yin

Does Size Matter?: Study finds emerging companies are doing just as well as large, established counterparts when it comes to reaching BoP beneficiaries

The Private Sector or Government : Who should solve Africa’s jobs crisis?

For Education Investment, ’The Fix is in the Mix’: At SOCAP14, talks turned to long-term models

Four ways to build an ecosystem to support business in low-income markets: How the Philippines is crafting a model worth replicating

Prepaid Protections: An interview with Cecilia Frew, Head of U.S. Prepaid at Visa