One of the most interesting things about the prevalence of cell phones in the developing world is how that business skipped so many evolutionary steps.

Few land lines were ever built in the rural parts of less-developed countries. There were no protracted deregulation battles. But there were, suddenly, cell phones, and their use mushroomed at a pace unmatched in the history of technology, leaving billions of people connected, their lives changed forever.

That led to another evolutionary leap in business: mobile money. No banks where you live? No problem. Creative thinkers developed a system to skip over bricks and mortar infrastructure, cash and credit cards altogether. The process by which people access currency and microfinancing by mobile device still has a few kinks to be worked out, but it’s an innovative solution no one saw coming 15 years ago.

What if every effort to improve health care in developing countries skipped a generation … or even two? The mind boggles at the possibilities.

Noted author and blogger Seth Godin talked about this – sort of – in his keynote address at the Global Health & Innovation Conference (GHIC) staged by Unite For Sight on April 12 and 13 at Yale University. He told attendees they were involved in work so important, they are obliged not to play it safe. He encouraged everyone to ask themselves, “What change am I trying to make, and how can I make it faster?” And he challenged them to both succeed and matter in their health care endeavors.

Gone are the days, he said, of mass marketing, of organizations playing to the crowd in the demographic middle. Communication channels are siloed, more specific, deeper, and “more and more people are leaving the middle and going to the edges.” In his estimation, that means change doesn’t have to incremental; the door is open for dramatic transformations. 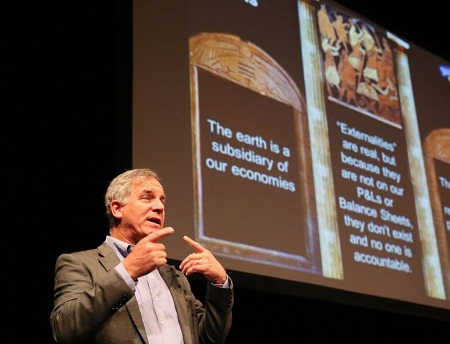 Here’s one take-away from Godin’s buzz-inducing presentation: Exhaustive trial and error has shown that certain health care “solutions” don’t work in the developing world. Instead of tweaking an old model, hoping against hope that it works this time, why not invent a completely new one?

(Gary Hirshberg, left, cofounder and chair of Stonyfield Farms, presenting in the Shubert Theater during the Global Health & Innovation Conference.)

He was talking to the exact right crowd. The conference attracted 2,100 highly motivated participants from 59 countries. How motivated are they? Well, consider that they are involving in solving what are arguably the most pressing problems on the planet, often despite limited resources and tremendous obstacles.

There’s a need for cleaner cookstoves in much of the developing world. It’s a complicated proposition that involves not just improved technology but culturally appropriate solutions. What if that effort skipped an evolutionary step and a “food-heater” was developed that was so clean, efficient and inexpensive that everyone in the world, regardless of income, would want one? Maybe that’s impossible. But what if it’s not?

Many of those at GHIC are thinking in such dramatic terms.

What if mothers were paid to breastfeed, as Leith Greenslade proposed at the conference? 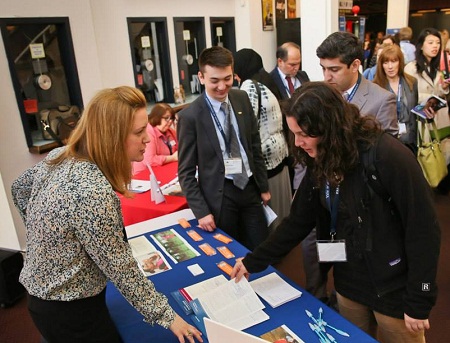 What if health measurables were rethought and redefined, changing donors’ focus and the definition of “best buys”? Jordan Levy broached this topic at the conference.

(In the lobby of the Shubert Theater, right.)

What if the roles or public and private health providers were more clearly defined – with each focusing on its comparative advantages – in various parts of the world, as Dr. Michael Gyasi mentioned in his discussion of cataract surgery in Ghana?

What if there was a better understanding of which products and services should be free, and which ones provided at a cost to recipients? Margaret McConnell is doing research on exactly that.

There’s a brain drain in many developing countries, with doctors leaving to work elsewhere. What if academic institutions, which are traditionally slow to change, jumped ahead to a new way to train health care providers that fits current technology?

The possibilities (there’s that word again) are endless. More to the point, they’re unknowable. Unless, that is, those in the field are open to dramatic change. And that described the GHIC; it was all about the possibilities that begin with ground-up thinking.

That’s something the world at large might note. Global health care is no longer the space for do-gooders. It’s the space where great things are being done … and will be done.

NexThought Monday – Collaboration to Save the World: The answer to ’wicked problems’ like poverty is radical collaboration By Ramon Marmolejos

’Lean So Far Into It That You’re At Risk’: … and 20 other quotable quotes from the Global Health & Innovation Conference By Kyle Poplin

Sankalp Forum 2014: Lessons for the India/Africa Connection By Payal Shah

Why Is Financial Inclusion in India Not Improving?: New numbers, new approaches By Ritesh Dhawan

What It Will Take to Feed the 842 Million Chronically Hungry People Worldwide?: (Hint: It’s not just about growing more food) By Emily Wanderer