Weekly Roundup – 5/10/14: Every investment is an “impact investment”

Both the problem and the potential of impact investing can be seen in this incontrovertible (dare I say inconvenient?) truth: On some level, every investment has a social/environmental impact.

The problem lies in measuring this impact, and balancing it against financial goals. The potential stems from the fact that more and more people are investing with that balance in mind – even at institutions not traditionally defined as “impact investors.”

For instance, earlier this week, Stanford University announced that it would divest its $18.7 billion endowment of stock in coal-mining companies. In doing so, it became the first major U.S. university to remove fossil fuel investments from endowments and pension funds. Stanford cited coal’s status as a major source of carbon pollution linked to climate change, and said it acted in accordance with internal guidelines that let the university consider whether its investees’ corporate policies or practices “create substantial social injury.”

The decision was precipitated by student activism: Stanford’s trustees were petitioned by a group called Fossil Free Stanford, the campus branch of a national student-led divestment movement that is active at about 300 universities. The movement has convinced a number of small universities to remove fossil-fuel stocks from their endowments, but in light of Stanford’s decision, other major universities may be under increasing pressure to follow suit.

The university’s coal holdings are a small fraction of its endowment, but they amount to a substantial amount of money. And though cynics might wonder if the declining financial outlook for the coal industry may have made this decision more palatable to Stanford’s bean counters, it’s a promising development nonetheless. 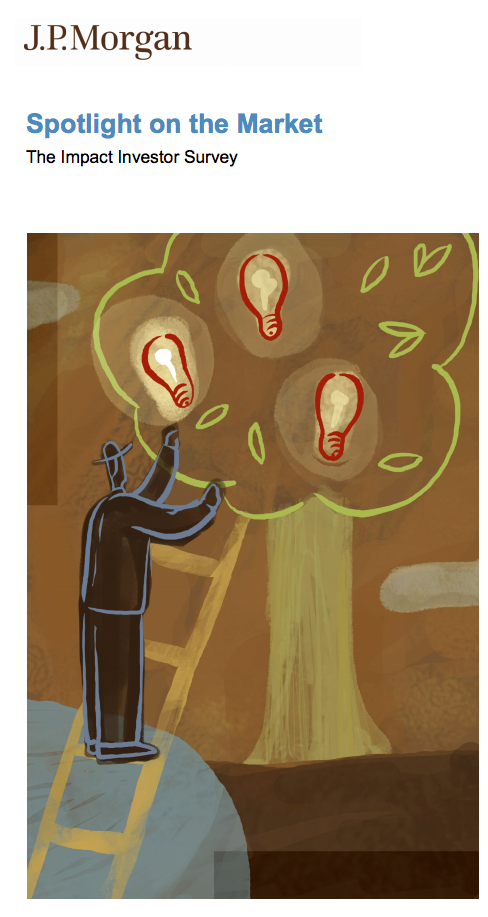 It was preceded by more encouraging news for the sector. On May 1, J.P. Morgan and the Global Impact Investing Network (GIIN) released the results of their 2014 Spotlight on the Market survey. The survey asked 125 of the world’s largest impact investors, including fund managers, banks, foundations, development finance institutions, and pension funds, about their expectations for the current year – and it contained plenty of reasons for optimism.

The investors surveyed expect to commit 19 percent more capital to impact investments in 2014 compared to 2013, and they expect their number of deals to increase by 31 percent. The report’s co-author Yasemin Saltuk, director of Research for J.P. Morgan Social Finance, interprets this as evidence of investor satisfaction with both the social and environmental impact and the financial returns of these investments. “We see the rise of a vibrant impact investing marketplace, where investors are targeting a wide variety of social, environmental and financial objectives and finding themselves satisfied with the results,” Saltuk said. “As collaboration between investors, governments and other key participants continues in 2014, we remain optimistic about the growth and development of the practice.”

The survey had other promising signs for the sector, including greater government support, new product and fund launches, and widespread impact measurement. A few key takeaways from the groups surveyed:

However, the report’s findings weren’t all encouraging. The investors surveyed complained of a shortage of quality deals and lack of appropriate capital. And though the headline stat of a 19 percent increase in impact investments sounds impressive, this capital still represents just $12.7 billion in expected commitments from these investors in 2014. If that’s all that 125 of the world’s largest impact investors can muster, it’s clear we’re still talking about a drop in the bucket.

NexThought Monday – A Brazil Without Favelas is Possible

The 10 (Mostly Still-to-be Invented) Jobs That Can Power Africa’s Future: From ’nutrient banker’ to ’rat trainer’ – these jobs might help employ the next generation

Inconvenient Truths: How a microscope lens for phones might improve health and hygiene in developing countries

A Small Drop in a Large Bucket: The World Economic Forum’s Abigail Noble, on why impact investing needs to go mainstream

Nigeria, From Pure Growth to Harnessed Opportunity: A new report on the 3D role of business in the unfolding transformation

Optimism and Innovation in the World’s Former Murder Capital: Lessons for Detroit (and other cities) from Medellín, Colombia