Weekly Roundup – 10/26/13: Guiding the “invisible hand” of the Base of the Pyramid market

Sometimes the invisible hand of the market needs, well, a helping hand.

When Madison Ayer, chairman and CEO of Honey Care Africa, joined the company three years ago, he realized there was no real ecosystem of suppliers, retailers or customers for farmers to sell their honey in East Africa. That was a problem, especially since the for-profit was in the business of selling hives to these farmers, most of whom had never before kept bees and lacked the training.

“Going against everything I learned in previous management experiences was that we had to build a model and we were going to do everything across the supply chain,” Ayer said during this week’s BoP Summit. “I realized we had to go outside of that, because the services weren’t there, the inputs weren’t there to make it successful.”

Ayer said the company set about doing everything from manufacturing beehives to training farmers on how to use them to developing field teams of beehive technicians to provide maintenance. But as the supply chain has grown and matured, Ayers says the company can start to pull back some of those functions and focus more on its core business.

The lack of an ecosystem in BoP markets isn’t just a problem for small social enterprises looking to engage the poor. For instance, Coca-Cola does businesses in 207 countries around the world. But as a buyer of agricultural ingredients for multiple brands, external challenges to trading with small, low-income farmers aren’t the highest barrier to sustainability.

“The biggest challenge to scaling up (sustainable practices) is internal,” said Denise Knight, director of Sustainable Agriculture at Coca-Cola during the summit. As a related challenge, the world’s biggest beverage company has virtually no “line of sight” as Knight put it, to small farmers in the developing world.

“Coca-Cola is one to seven layers removed from the smallholder farmers,” Knight said.

So, much like Honey Care, Coca-Cola has been experimenting with different models to connect with the local farmers and build markets.

Fruit juice, which is what Coke is after, is considered a secondary market for farmers. The bigger profits for farmers are in sales of fresh fruit, Knight said. But you can’t have one supply without the other, especially in Haiti, where mango production is still stunted years after the earthquake there.

Knight explained the Haiti Hope project as a mechanism for rebuilding the mango market. Odwalla (a Coke brand) created “Haiti Hope Mango Tango”, for which ten cents of every bottle sold, up to $500,000 per year, is donated to the Haiti Hope Project. The goal of the five-year Haiti Hope is to double the mango incomes of 25,000 Haitian farmers five years after joining the program. The initiative, which also involves TechnoServe, aims to rebuild the mango supply and product quality for businesses like Coke. Haiti still isn’t a major market for mangos for fruit juice, but the company hopes it will be as soon, partly due to Haiti Hope Project, Knight said.

A major, and fiercely competitive, market for General Electric is China, of course. Marc Kerachsky, director of New Market Models at General Electric’s healthymagination, noted the example of GE’s V-SCAN, a handheld ultrasound device. In China, GE is selling it at a 60 percent lower price point than a typical ultrasound as it looks to serve low-income clinics and facilities. Kerachsky said the pricing wasn’t reduced by minimizing quality, but by fitting it to the needs of the community and by sourcing components locally. 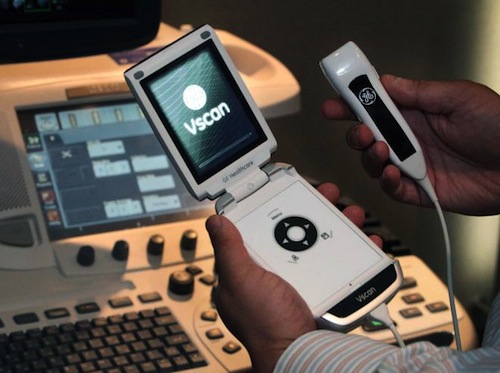 Ultrasound devices are the biggest money makers within the company’s GE Healthcare Systems business unit, which reached sales of $18.2 billion in 2012. And although health products remain the largest business segment inside of GE, revenue was flat in 2012, growing just 1 percent. The health devices giant can’t give up the low end of the market without jeopardizing its large stake in the higher end, as this to this report in the Milwaukee Sentinel illustrates:

“GE Healthcare’s biggest competitors in ultrasound are Royal Philips Electronics, Toshiba Corp. and Siemens AG. But GE also faces competition from more than 60 small competitors in China at the low-end of the market, in which an ultrasound for general imaging may sell for $20,000.

GE Healthcare nonetheless plans to remain in that market despite the competition and tight margins, hoping to avoid the common mistake of giving competitors a base from which they can develop higher-priced products and enter new markets over time. It also believes that innovations in its lower-priced ultrasound machines can result in improvements in its more expensive and sophisticated models.”

Those are just a few examples from the summit I thought were worth sharing. Of course, you can read a whole lot more on our special summit blog. And speaking of the Summit, here are a few of my favorite Tweets from the hashtag #BoPSummit this week:

We uses to say we needed a few strong successes. Now we want more than the usual suspects. Progress! #bopsummit

There is still need for public good creation to help #bop enterprise. Should NGOs do this work instead of enterprise formation? #bopsummit

A Thank You to Searchlight

Searchlight South Asia, a monthly newsletter created by Intellecap for The Rockefeller Foundation to report on trends in urban poverty around the South Asia region is ceasing publication. The project started three years ago a way to highlight on-the-ground urban issues and initiatives in Bangladesh, India and Pakistan. Through the research and content presented on education, water and sanitation, health, energy and infrastructure, the newsletter sought to raise awareness and inspire ideas to action.

All of Searchlight’s articles and monthly issues can be found urbanpoverty.intellecap.com

At NextBillion, we were grateful for the opportunity cross-posted articles from Searchlight South Asia contributors on issues ranging from clean water distribution through private networks to customer loyalty to novel ways of delivering health care to customers in rural areas. These were far from quick and dirty blog posts, but in-depth and well-sourced research reports that deserve your attention if you’re in, or interested in, urban solutions.

Thanks to the Searchlight team for all the great work over the years.

Day 1 at the BoP Summit: Why BoP business practices need to move to 2.0 By NextBillion Editor

Day 2 at the BoP Summit: Urgent, but practical, action By NextBillion Editor

Free Trials and Payment Plans: Creative financing plans take a bit of risk, but up the reward for clean energy retailers By Alba Topulli

We Have Seen the Future, and It’s Universal: Single-payer systems being penciled onto BoP health care’s ‘blank slate’ By Kyle Poplin — WDI

Tags
agribusiness, Base of the Pyramid, multinational corporation