Weekly Roundup – 9/27/14: At the Business Call to Action Forum, cracking the SDG code

Panasonic might be best known for its home entertainment systems, namely the beautiful plasma screen TVs beloved by many digital “snobs”. But after posting hundreds of millions in losses over the years, Panasonic is getting out of the TV business. Its turnaround plan relies heavily upon earnings from its automotive and industrial systems units. Most notably, Panasonic is aiming for dominance as a lithium ion battery supplier for electric cars, including Tesla, one of its prime customers and its gigafactory partner.

At the same time (like every company), Panasonic is looking for business and sustainability cred wherever it can reasonably extend itself. That includes base of the pyramid customers. Panasonic is selling a relatively new solar lantern, which the company says can illuminate for up to 90 hours thanks to a 3.5-watt solar panel. The system, which also includes a USB port for cell phone charging, is available in Indonesia, Myanmar, Thailand, Bangladesh, Cambodia, Kenya and Malaysia.

While consumer electronics is its bread and butter, this is new territory for the electronics giant, which estimates that 30,000 tons of carbon emissions could be cut through the sale of 1 million total lanterns over five years. The problem doesn’t seem to be the technology, but rather the challenge of selling it.

“We do not have the sales channels required to deliver solar lanterns to the BoP,” said Genichiro Shimada, General Manager for Panasonic’s International Relations Group, during the Business Call to Action Forum 2014 this week. “We need to create new sales channels with inclusive business partners.”

So far, many of those channels have included selling to donor organizations. Shimada says the firm is working hard to build those relationships with NGOs, microcredit firms and loosely affiliated sales networks to get its product into the hands of those who really need it. (Forging those relationships is one of the goals of the Business Call to Action and the forum. Launched at the United Nations in 2008, the nearly 100-member group aims to accelerate progress towards the Millennium Development Goals (MDGs) by challenging companies to develop inclusive business models catering to people in emerging markets earning less than $8 per day).

Shimada’s comments had Bart Hartman, CEO of the NOTS Social Enterprises and fellow panelist at the forum, wondering if Panasonic isn’t “inventing another wheel.” Hartman asked if a more logical strategy would be to simply buy one of the smaller companies already doing business with BoP customers.

Shimada politely dismissed the idea, noting that not only is competition good for the field, but also that Panasonic makes a superior product. (The implication being that to purchase another company with inferior technology would ding the brand). 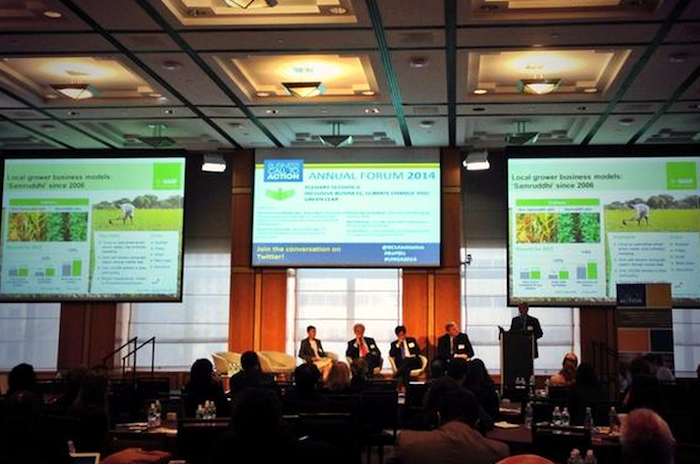 The conundrum for multinational companies is one which we have explored at great length. Sheer size doesn’t give multinationals the experience of working in very low income markets. And for social entrepreneurs, experience doesn’t necessarily give you scale.

But there’s a different kind of pressure being placed upon multinationals like Panasonic these days. As the Millenium Development Goals are nearing their end in 2015, the United Nations is crafting the Sustainable Development Goals (SDGs) to take their place. Those 17 goals, stil very much in draft form, across over 100 targets will focus on improvements in health, sanitation and education, but every single one will be relevant for businesses, both environmentally and economically.

While there’s lots to criticize about the MDGs, they did move companies, NGOs and governments toward new alliances, even if those alliances were beta versions when it comes to actual impact. The SDGs by design have engaged more companies in their formulation, said Paul Ladd, Senior Policy Advisor and Lead Author, Post-2015 and SDGs at the UN Development Programme.

Stuart Hart, who led the panel that included both Shimada and Hartman, posed the question: In 15 years, will those companies that fail to integrate the SDGs into their core business operations be at a competitive disadvantage? Hart, the Grossman Endowed Chair in Sustainable Business at the Univesity of Vermont Business School and the S.C. Johnson Chair emeritus at Cornell University, clearly thought so, as did other members of the panel. As we saw statements from the Rockefeller family divesting its dirty energy assets earlier in the week, it’s hard not to agree.

But Ladd was more circumspect. It would be great if everyone came to the table out of a social obligation, he said. But despite the “backslapping” around alliances and triple bottom lines, some companies “unfortunately” will do just fine working in a less than sustainable way, i.e. business as usual. That’s why we need more pressure from civil society and the streets, upon which just days earlier in New York City some 400,000 people demonstrated for real action on climate change from the UN General Assembly.

Ladd seemed to share the protesters’ sense of urgency. “We’re running out of time,” he said.

NexThought Monday – Why Did Vittana Close Down?: The real question: why don’t more organizations pull the plug?

Around the World with Bitcoin: How the cryptocurrency is being put to use in five hotbeds of early Bitcoin activity

Join the Livestream of the Business Call to Action Forum 2014: Sustainable businesses for the BoP is the focus

’The Hidden Tragedy of the Poor’: An interview with Jonathan Morduch, executive director of the Financial Access Initiative