Weekly Roundup – the Social Enterprise: Solution to the Migrant Crisis

Many of the hundreds of migrants who died on board the capsized boat in the Mediterranean Sea last week never had a chance. Their hope for a passage to a better life in Europe started and ended in the cargo hold of the ship. Most couldn’t afford the smuggler’s price for a ticket that would have given access to the upper deck, and at least a chance for escape on the open sea when the ship went down.

It’s a sad coincidence that the human trafficking tragedy in the Mediterranean happened within a few days of the two-year anniversary of the factory collapse of Rana Plaza in Bangladesh, which killed at least 1,138 people, mostly women laborers. Their conditions may be different, but their basic economic circumstances are the same. And what happened at sea last week shocks even those deeply immersed in efforts to stop human trafficking.

“Honestly, my initial reaction was to be just so incredibly horrified; I haven’t seen that type of scale in the 10 years I’ve been doing this,” Mark Wexler, Executive Director & Co-Founder of Not For Sale (NFS), told me this week.

The San Francisco-based Not For Sale is a nonprofit that works with the victims of human trafficking, providing them with job training, counseling and other resources that help them enter a legitimate work environment. Launched eight years ago, NFS started out by working with NGOs and businesses in the Bay area, helping Americans – young women aged 18 to 25 who are predominantly African American, Latina and Asian American – most of whom have been exploited by the sex trade. (Here’s some recent research on the scope of the problem in Silicon Valley.)

But since its launch, NFS has expanded in size and mission, establishing a presence in Peru, Romania, Thailand and The Netherlands in an attempt to deal with the economic conditions that fuel human trafficking in the first place.

“(In NFS’s first four years) we focused on once they’ve been trafficked, how do you get them back into the workplace?” Wexler said. “But we realized that’s not the only thing we should be doing.” To truly fight human trafficking, he said, NFS had to address another question: “How do you truly create linkages and alignment in some of the highest risk places in the world to the marketplace?” 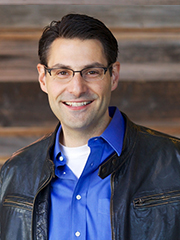 To that end, Wexler (pictured left) and David Batstone, co-founder and president of Not For Sale, also founded Just Business, an incubator that develops social startups, and finds them investors and management teams. NFS works as a kind of recruiter, seeking out social enterprises that might fit Just Business’s mission. Presently, there are 10 businesses in the Just Business incubator, six of which are focused on anti-trafficking-related issues. REBBL, which markets an organic, fair trade herbal tonic produced in Peru, is the first graduate. The beverage company, whose name is an acronym for roots, extracts, berries, bark and leaves, is a social enterprise designed to blunt forced labor in the Peruvian Amazon by sourcing ingredients from indigenous people. Wexler projects NFS’s investment to help start REBBL should provide yearly returns nearing six figures once the company is fully scaled up – funds that will enable more social programming. And that scale-up could be sooner than later, as REBBL is now selling the tonic in eight U.S. states, and counts Whole Foods among its retailers.

However, what NFS and Just Business do is still very rare.

“Generally, the anti-trafficking space as it is currently constituted looks more downstream than it does upstream. It’s got a long way to go to reorient and look at economic solutions,” Wexler said.

But given the urgency and depth of the problem, “I think this is fertile ground for entrepreneurs in general – I’d even scrub the ‘social’ part.”

It often takes horrible events such as those in the Mediterranean and Bangladesh to shock the system and spur action from governments. And it’s questionable if their pledged action will be effective, especially given much of Europe’s anti-immigration posture of late. But even if the EU did have the commitment, dealing with the migration crisis will take a lot more than an armada of patrol boats sending back frigates. It will take new efforts to stop the smugglers from simply refilling them with more desperate souls willing to pay.

The nearly 36 million people worldwide enslaved through human trafficking represent “a wakeup call, and this is not going to be solved by the handful of nonprofits and NGOs with $100 million dollars or so between them,” Wexler said, adding: “This is a business problem and it requires a business solution. I hope and pray that people will respond in that way.”

‘There is a Democratization of Health Care Going on Around the World’: IPIHD annual forum yields lessons on empowerment, tools and location By Anne Katharine Wales

In Ghana, the Diaspora is Fueling a Social Enterprise Liftoff : Often well-funded, well-educated returnees are contributing to a ’brain gain’ By Emily Darko

Our Next Google Hangout: Base of the Pyramid 3.0: Join us for a live discussion with Fernando Casado Cañeque and Stuart Hart on April 29 By Scott Anderson — WDI

Mobile Money Without Borders: How a new model is transforming the remittance landscape in West Africa By Claire Scharwatt and Chris Williamson

’A Mark of Pride, Not Shame’: Momentum and challenges in the ethical supply chain movement, two years after the Rana Plaza tragedy By Tanvir Hossain