Weekly Wrap: On Earth Day, Poverty, in All its Shapes and Sizes

When I first considered writing for NextBillion, my concern, beyond finding the time, was whether or not I had enough to say about its editorial focus of poverty, given that I am by no means an expert on the subject. The reason writing is always worth the time, however, is that I learned, in doing it, that it was my narrow definition of poverty that limited my ideas, not my expertise.

Poverty is also not exclusive to our species. The human, particularly western, proclivity to define poverty as the absence of money makes it something from which only people can suffer, but just as money alone is neither the cause nor the answer to poverty, people alone are not its victims. If we consider the loss of home, food, freedom, the murder of our leaders and parents as a state of being impoverished, we include a much larger, more diverse population in it, and significantly expand the bottom of the pyramid. We will indeed expand the bottom of the pyramid if we make room there for elephants, which is what I hope to accomplish here. 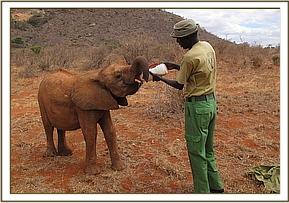 In Nairobi, Kenya, is the David Sheldrick Wildlife Trust, an orphanage for elephants and rhinos. It is a place filled with young elephants, each with their own story of terror – of watching their mothers be killed by poachers, abandoned when they fall into man-made holes and ditches, wandering alone in the bush being attacked by predators, shot at and starving. And it is a place filled with as much love and joy as I have ever felt. The keepers are surrogate parents who have learned to keep the babes alive in the most dire cases, and who mourn for each one when they can’t. They know how to touch them, hold the bottle with milk formula (itself a great feat to develop), help them acclimate to the society of the other orphans, douse themselves with dirt to avoid sun burn and chase away the occasional hungry lion. They sleep in their pens, and wake up every three hours during the night to provide meals. There is heart-melting love among the orphans themselves as well. To see a new arrival being patted down by an octopus of individual trunks is to understand how complex and rich elephant society and emotions are.

Katy Payne discovered elephant language while sitting outside two elephant’s pens at a zoo, and founded the Elephant Listening Project at Cornell. She has proven that elephants have a complex society, and are even more important to the ecological system of African forests than we had imagined. Not surprising to anyone who has seen one is that elephants are some of the most extraordinary creatures on earth, humans included.

Science is just beginning to understand the role of the elder in nature. They believe that the old, large cod (the prize catch) might have led the schools to safer spawning ground and avoided the collapse of the species in New England. Older matriarch elephants have lower infant mortality in their families during droughts because they remember where the reliable watering holes are.

The bottom of the pyramid rightly gets the attention of NGOs, governments, academics, financial institutions and citizens. They all work assiduously, and spend enormous energy and money, to help alleviate poverty, not only because it causes pain and suffering to those living in it – but also because the health and wellbeing of all people are critical to the health and sustainability of the planet. The truth is that the health of the world is dependent on the health of all its creatures, not just some. The only way to change the dynamic is to recognize it – to count these magnificent brethren when we measure poverty, to see that their problems are our own, and to fix them. Adopt an elephant.

Investing in Social Enterprise: Lessons from the 2012 Sankalp Summit By Aarthi Rao