What’s Next for Impact Investing – Facing Market Realities: Why the environment is the core of impact investing in China

Editor’s note: The last year has seen significant churn in the impact investing sector, most notably with the wind down of E+Co. Today we’re starting a new ongoing series, What’s Next for Impact Investing, in which fund managers and other practitioners discuss how they are building and evolving business models to achieve both maximum social impact and solid returns. The series wil be archived on the NextBillion Big Idea page.

The National People’s Congress (NPC) of China, which meets in Beijing every year to exercise its lawmaking powers, has usually been dismissed as a nearly powerless rubber stamp legislature. However, an unprecedented thing happened this year during the NPC election, supposedly just a formality. More than one third of the delegates voted against the handpicked candidates to head up NPC’s Environmental and Resources Preservation Committee, a record in the history of NPC.

This incident, which reportedly even caught China’s newly-elected president Xi Jinping off guard on the spot, sent shockwaves throughout Sina Weibo, China’s equivalent of Twitter, with over 500 million registered users. Not surprisingly, an overwhelming majority of Weibo users expressed their unwavering support for such a move. To me, this incident came across as a tipping point for most Chinese people, including those naysayer delegates, who are simply fed up with China’s many environmental issues that seem to get worse and degrade the quality of their lives every day.

When it comes to impact investing, this phenomenon probably can also serve as an easy explanation, among other things, why this new investment asset class should focus more on solving environmental issues in China.

Please don’t get me wrong – the point here is not environmental vs. social, but rather which one should come first in China’s context today. Considering that impact investing is still a new and even foreign concept in China, it certainly makes sense to take one step back and assess where proven success cases can be created more quickly and realistically. Such success cases, in return, will help reduce the risk of over-hyping the concept and increase the odds of impact investing being accepted and leveraged by various local stakeholders down the road.

When I first started China Impact Fund (CIF), I thought that impact investing in China should give equal weight to the country’s social and environmental issues, just as what my peers do in most other emerging markets. As I am relocating back to China and spending increasingly more time on the ground, my thinking about what my priority should be, at least in the near term, has evolved toward environmental for several key reasons. 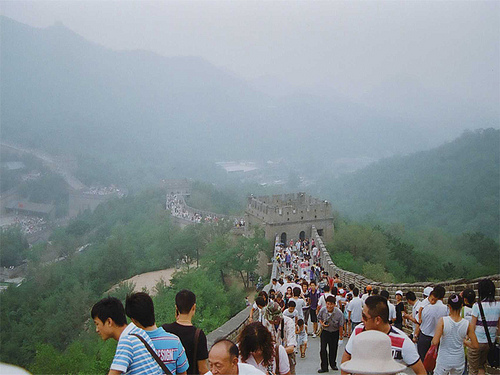 Every social problem that impact investors are attempting to resolve in China can be traced to or associated with some kind of environmental issue nowadays – whether it’s public health, elderly care, or poverty. The other day I was having lunch in Beijing with five well-to-do friends from high school we attended in northern China , when all of them, almost simultaneously, began to talk about environmental and food security problems bothering them and their plans to immigrate overseas. I thought to myself what China’s low-income and disadvantaged people could do to escape from the same problems, like heavy smog in northern China and worsening quality of drinking water. The short answer, obviously, is nothing.

With little means and resources, Chinese people living at the base of the economic pyramid simply don’t have the luxury of geographic flexibility as my friends or maybe some of the NPC delegates do. Therefore, they would need serious help from different directions to have these issues addressed first and foremost, which are having a direct impact on their livelihood. Not surprisingly, if you speak to ordinary people in China, many say environmental problems are a bigger daily concern compared with social ills, such as social inequality caused by the country’s enlarging wealth gap.

At the end of the day, many of my fellow countrymen say they can manage to live with income inequality as long their own livelihoods stay intact. As a matter of fact, it is environmental degradation that they simply cannot tolerate further, as evident in the instances of recent local unrest linked with environmental damage. For example, the most prominent social unrests from last year, Shifang (Sichuan Province) incident in July and Ningbo (Zhejiang Province) incident in October, both took place due to environmental concerns rising up from the local community.

At industry conferences and forums that I have attended, China’s political system tends to be the “white elephant” in the room when it comes to impact investing. From my perspective, to get a bigger bang for their bucks, impact investors interested in China should first gain a holistic view of the nation’s political characteristics and policies. In other words, an individual or institutional investor should methodically look under the hood of China’s political system to determine which China issues they are realistically positioned to help address.

For impact investing to take root in China, policy support is indispensable given the dominant role the Chinese government plays in every walk of life. In China’s context, it is especially important for an ambitious impact investor to sort out how to leverage existing policies and in the process of doing so, potentially enlighten new policies in this area.

Compared to other countries, the key point of interest for impact investing from a public policy point of view is China’s “green economy” transition. Government policies and regulations in China in this regard are plenty and comparatively clear, and therefore the corresponding market mechanisms are relatively mature. Since the late 1980s, six national laws have been passed to form the basis of a green economy, including the Environmental Protection Law in 1989 and the 2002 Cleaner Production Promotion Law. In contrast, the market mechanisms for supporting the society’s disadvantaged groups are far from perfect. This may explain to some degree why the Chinese government has long played a leading role in most of China’s poverty alleviation projects. Further, this largely unique dynamic creates a dilemma for the establishment of social enterprises that seek to take advantage of such a market mechanism.[1]

And for more details on this front, I encourage you to download and read the China impact investing report recently authored and published by China Impact Fund (CIF) and New Ventures China (NVC).

I don’t remember where I read this, but it has stayed with me ever since: Capitalism may not be in China’s system, but it is in Chinese people’s blood. This deep-rooted DNA, coupled with the country’s current stage of development, means that most entrepreneurs in China build up their enterprises primarily on commercial principles. And they should not be blamed if they don’t necessarily see a viable and scalable business growing out of a social enterprise model. This also explains why most social enterprises in China today are either started by people with a traditional NGO background and/or young people without a proven track record running a business.

Anna Yang is founder and CEO of a CIF/NVC portfolio company called Green Channel that provides primary school students with stationery products made from recycled paper. She started out as a self-identifying social entrepreneur, but often ran into questioning by investors and customers whether her company was a real business, simply because most local people are confused about the concept of social enterprise or associate it with not-for-profit kind of work. Yang instead began to call herself an environmental entrepreneur, which seemed to open doors for her much more quickly.

On the demand side, based on CIF/NVC’s experience with Chinese entrepreneurs, it has seemed much more effective to make environmental entrepreneurs impact-oriented than turning people from a NGO background into business-savvy entrepreneurs. From this vantage point, we have proceeded to come up with the concept of “Green the Gray,” which basically means that even traditional manufacturing companies in China can be converted into environmentally friendly enterprises if properly stewarded.

As impact investing builds success cases and gains traction in China, we are confident that this new asset class will gradually be in a position to help address the country’s many social problems as well. In the foreseeable future, it is probably wise that impact investment dollars, just to be more productive for both impact and financial returns, focus more on supporting China’s environmental SMEs. (Incidentally, this lesson can apply to impact investors considering just about any country’s market and political/social concerns, before they invest.)

China will potentially account for half of the world’s CO2 emissions by 2050, and Chinese SMEs already constitute 60 percent of China’s GDP and contribute over half of the country’s employment[2]. I am confident that environmentally-focused impact investing has a big role carved out for itself in gearing China towards a sustainable and peaceful mode of development. This is certainly no small deed in itself because it will change the course of the nation’s future, and therefore of the world. Simply put, it will be good to everyone on this planet.